One random comedian, eight random questions: it's the ultimate test of funny person and fate. Unless it's prorogued.

Modern politics, eh? It’s a messy, confusing business, particularly for the politicians, all staggering about like table footballers who’ve fallen off the pole. Few of us have any real clue what happens next, but thankfully there are people doing decent research, then telling us their takes. Like Tiernan Douieb, who does it for various demographics, too.

A fine stand-up – check his live specials on the NextUp platform – Douieb has a couple of regular forums for the newsy stuff. First there’s the Partly Political Broadcast where he interviews knowledgeable people, and spreads the word in an amusing fashion (plus music from top hip-hopper – and Tiernan’s brother – The Last Skeptik, who’s got a cool new album out too).

And then there’s his show for kids, How Does This Politics Thing Work Then?. Now, you might imagine that right now he and colleague Tatton Spiller just stride out, say ‘it doesn’t’ and march off again; but no, they give it a go. Indeed, they’re doing a double-header this Saturday and Sunday, at the Hertford Theatre’s kid-friendly Hi-Jinks festival. Do the shows keep up with current events then, proroguing Parliament and all that?

“Yes, they do,” says Douieb, “but only within the most basic elements of it, suitable for seven year-olds. So, we don’t talk about the specifics of the proroguing or the legality of it, but we do mention the changes to each party’s Brexit plans. The show is an overview of how politics works, or is at least meant to, so hopefully children will leave and then watch the news with a better standpoint to understand it all.”

So what might cause a frantic Saturday-night rewrite? “A general election, another new PM, a change in Brexit plans, or you know, parliament collapsing as its eaten by a giant sea monster.” 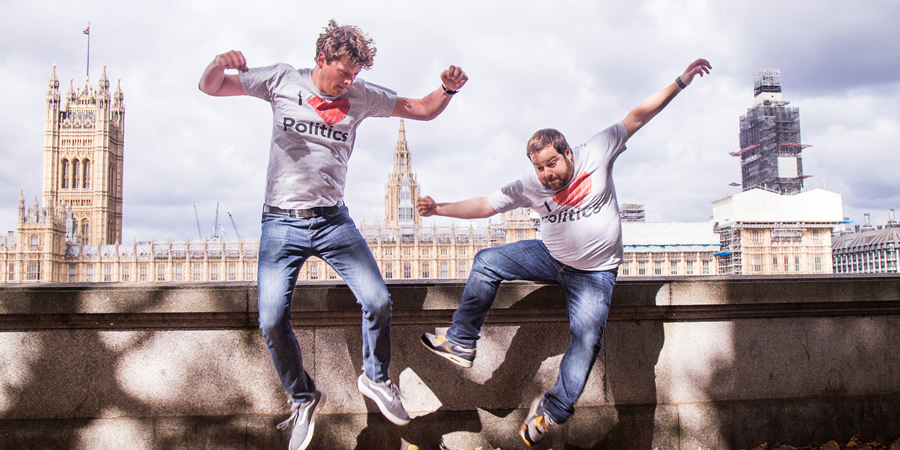 Stupider things have happened. Then a month later, Tiernan will be hosting a special edition of the aforementioned podcast, at London’s 2Northdown.

“It’s a live version of the Partly Political Broadcast which means, much like the podcast, I’ll be talking about what’s happened that week replete with jokes, but I’ll also have planned some fun extras for the live audience, I’ll be joined by a few serious guests who can explain things depending on where we are by then and several comedy guests who’ll take the piss out it regardless.

“Most importantly, there is a bar so we can numb any actual feelings about how things are going. It’s the first time I’m trying a live show what with the ever-changing nature of politics right now, but I hear there might be something happening that week so thought it seemed appropriate.”

Might as well, while the power still works. Tiernan Douieb, your Random 8 wait.

Who was your first celebrity crush (and ever met them)?

Hmm, probably Tiffany Amber Thiessen who played Kelly in Saved By The Bell. And no, never met her or any of the Saved By The Bell cast. Not sure the UK comedy scene crosses over all that much with the 80s US teen comedy drama scene.

Maybe someone should set up a themed gig where each act gets rung off by a bell when they’re done and a different member of the Saved By The Bell cast does it? Except for Screech obviously as he’s in prison. Gutted.

Although while writing this I’ve just seen they’re doing a Saved By The Bell spin-off, so there’s always hope.

Ever walked out of a film?

No, even though I should have done loads. I’ve walked out of two plays though, or at least, not returned after the interval. One was so boring it almost gave me brain freeze, and the other so shit that had they reworded the blurb to say it was a seminar in how not to do theatre I’d have stayed.

Who’s the most interesting person you’ve ever met?

Tricky one this, as I’m lucky enough to meet interesting people all the time, or at least people I think are far more fascinating than I am and who I always want to hear more from.

But for sheer entertainment value it has to be fellow comedian and lovely bonkers man Tim Fitzhigham, who can regale you for many an hour about the time he had to fight off rabid dogs using cricket strokes in the Caribbean, or when he got gout aged 18, or one of his many other adventures.

I remember once I was about to interrupt him mid conversation to say hello and he was in the middle of ‘then of course he jumped out of the window riding his horse and clutching a bible.’ I still have no idea what that was about and I almost never want to know.

Which low-key law would you introduce?

For pickled onion crisps to be sold outside of Scotland. It’s a travesty you can’t seem to get them in the South. Absolute travesty.

Who do you do a decent impression of?

Kermit the Frog. At the moment I spend a lot of time singing If You’re Happy and You Know It to my daughter in a Kermit the Frog voice and occasionally in my not-as-good Elmo voice. Our downstairs neighbour is a theatre director and occasionally I wonder if she thinks I’m trying too hard to get a part, but no, it’s just that my daughter is very specific about which Muppets must sing songs to her.

Do you have a good hangover cure?

Yes, it’s partly fairly normal in that it’s a big mug of coffee, ibuprofen and a large breakfast often covered in chilli, but with the added secret ingredient of a massive dose of insulin. Not sure what it’d do to non-diabetics but if your hangover is that bad, hey, why not give it a go? What’s the worst that can happen apart from a vicious hypoglycaemic attack?

What’s the worst thing in your wardrobe?

A plaster cast mould of my arm, but as though it’s been severed off. I forget which cupboard it’s in every single time and it scares the crap out of me, but I can’t get rid of it as you never know when I’ll need it. I’ve no idea what for, but you never know.

Who should be Britain’s next Prime Minister – but not a politician?


Filed Under: Uncategorised
Previous Being a dad and being self employed is a funny business
Next No Joke: The Scientific Tricks To Making A Child Laugh