Tiernan Douieb vs The World

Ignorance is bliss right?
So if you don’t read this blurb and never know what this show is about you’ll feel generally happier in life?
Wrongness times ten cowboy/cowgirl.
In his 3rd Edinburgh Festival solo show Tiernan says apathy schmapathy.
The world’s a mess and he’s got his marigolds on, ready to tackle all. After years of being politically ignorant to the point where he thought a capitalist was someone who only used lower case letters, Douieb’s found himself gigging to protestors at the TUC demonstration, to UCL students occupying their university against tuition fees and nearly ended up on Question Time.
Lucky he didn’t or he’d have shouted at David Starkey a lot.
Tiernan’s had it up to here with the wrongs around the globe and he’s only 5.5″ so no one is really sure just how angry that makes him. Contains jokes, actual political views but not in a clever way, and occasional dancing.*

‘He skilfully moves from topic to topic like a pro, and his simple observational humour is refreshing. …Douieb is a different, friendly sort of comedian‘ – Three Weeks

“I would challenge anyone not to warm to Tiernan’s boyish enthusiasm. He has an easy rapport with the audience and his gags provided plenty of laughs for the sell out crowd“. – One4Review.com

‘If there’s a more charming comedian than Tiernan Douieb offering his wares in Edinburgh this year, then I’ll happily eat the gold paper fan which he so thoughtfully distributes to each audience member at the beginning of his show. Douieb performs with such confidence that it’s easy to overlook how well his material comes together, or how often he generates laughter. It’s a sleight of hand that is all part of the show’s understated charm.‘ – Fest 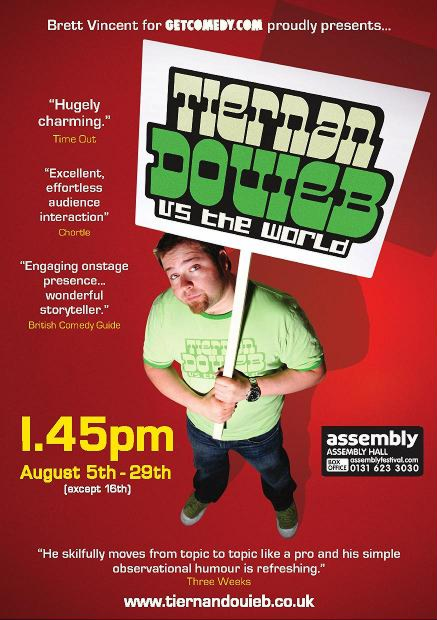 Previous Littlest Things
Next This Isn’t For You