The World Is Full Of Idiots, Let’s Live In Space

The inspirational Commander Chris Hadfield from the Canadian Space Agency said that after spending 6 months on the International Space Station he felt a great sense of just how much the world is all one place and we are all one people living together on it.

In this new hour of stand-up, professional cheery misanthrope Tiernan Douieb wonders why we have to send people quite so far away to have that realisation, and just how feasible is it to fire a large portion of the world into space until they behave? An hour of jokes on politics, free speech, racism, terrorism, global warming and other fun lighthearted comedy subjects.

This was my fifth solo show which I performed at the Edinburgh Fringe 2015 to nicely full houses at the PBH Free Fringe.

A recording of the show was made at The Phoenix in London on 17th January 2016, ‘The World’s Full Of Idiots, Let’s Live In Space‘ is Tiernan Douieb’s second filmed special.

“The show is funny, but more than that it’s interesting and, actually, a little bit life-affirming.” – Giggle Beats 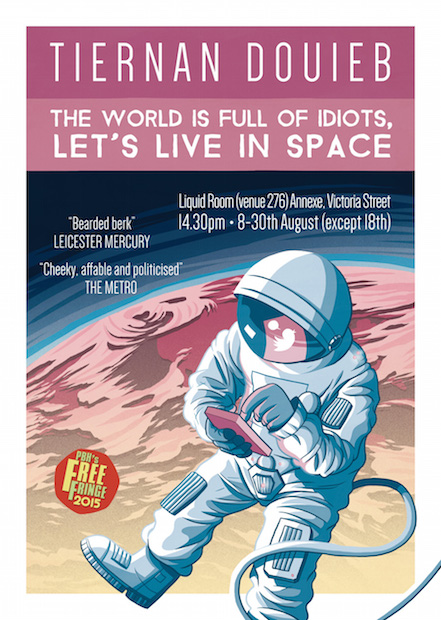 Previous This Isn’t For You
Next Miserably Happy