Tiernan Douieb’s 2017 show transports his carefully-cultivated echo chamber to the Edinburgh Fringe, bringing with it a new hour of satirical gags and nonsense musings – if ignorance is bliss should we even know that? Can we learn to understand people we don’t agree with? Should we even try if they are genuinely very annoying?

Miserably Happy is Tiernan Douieb’s sixth solo show at the Edinburgh Fringe.
His recent projects include: writing and producing his weekly podcast, Partly Political Broadcast, which combines jokes about the news with expert guest interviews; organising a series of shows in aid of Help Refugees with Jen Brister, featuring Sarah Millican, Dara O’Briain, Adam Hills, Shappi Khorsandi and many others at performances across the UK; supporting Frankie Boyle throughout his August 2016 run at the Soho Theatre; and co-running Comedy Club 4 Kids where he is resident MC, making small people laugh alongside comedians like Adam Buxton, Bec Hill, and Nish Kumar.

“Opinionated yet likeable” – The Guardian

“Sharp, warm and above all, very, very funny” – Three Weeks 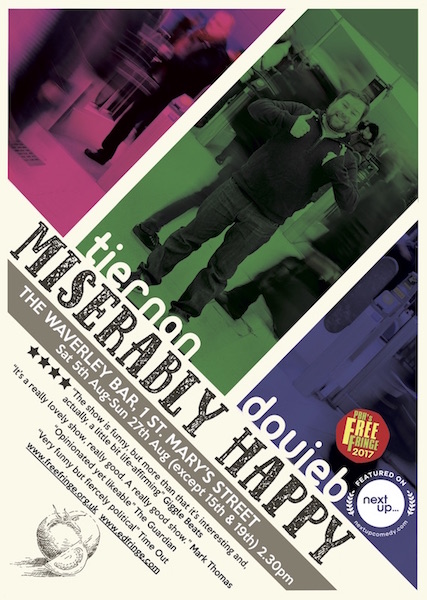 Previous The World Is Full Of Idiots, Let’s Live In Space
Next Comedy Club 4 Kids