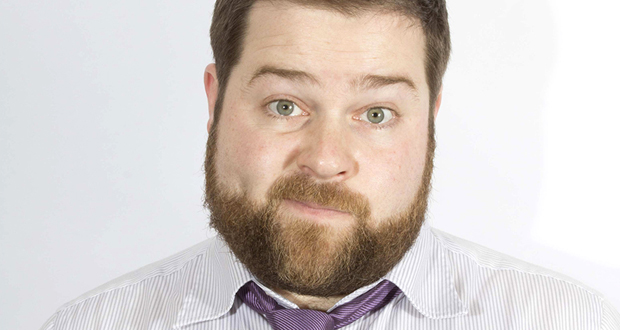 Tiernan Douieb’s The World’s Full of Idiots, Let’s Live in Space is an interesting, beautifully told show that isn’t necessarily a mile-a-minute with laughs.

Douieb’s show is a slow-burner, but one that takes no time at all to fully capture the audience.

Such is Douieb’s buoying enthusiasm about his topic – the vast peacefulness and impressiveness of space, and more broadly our selfishness on Earth – the space theme makes up a good chunk of the show.

There were instances where Douieb was performing to amazingly engaged silence; his material didn’t demand laughs for reasonably big chunks of the show (though these blocks were invariably punctuated with a nicely formed gag that never failed to achieve a roomful of laughter).

Some jokes perhaps used obvious subjects and predictable routes, but this didn’t stop them being enjoyably successful with the audience.

What was probably most enjoyable was Tiernan Douieb’s seemingly inexhaustible passion and innocent enthusiasm for goodness. ‘Empathy isn’t finite!’ More and more popular, I think, are stand-up shows that present almost more as an emotionally intellectual discussion than a reel of gags and anecdotes.

This isn’t to say Douieb’s show isn’t funny; certainly it is, and his material is pleasantly funny. As is his refusal to laugh along with the audience at his own jokes – which can very quickly get tiring in an hour of stand-up comedy.

Instead he seems to modestly contemplate in a very small manner, until his audience has recovered, before launching again into wide-eyed awe at the possibility of it all.

There are jokes made about subjects that the Fringe will be awash with. Douieb, however, breaks away from being too safe or obvious when making such gags: his mention of Katie Hopkins’ fan base – ‘We’re racist too! But we’re not sociopaths as well!’ – is well-received and a nicely original line.

Towards the end the jokes are more frequent and the laughs are thicker. Douieb can swerve easily between his impassioned innocence to exasperated ranting, which finds deserved laughs and provides the show with a better front.

The show is funny, but more than that it’s interesting and, actually, a little bit life-affirming.

Filed Under: Let's Live In Space, The World Is Full Of idiots
Previous
Next Nice Blog Review