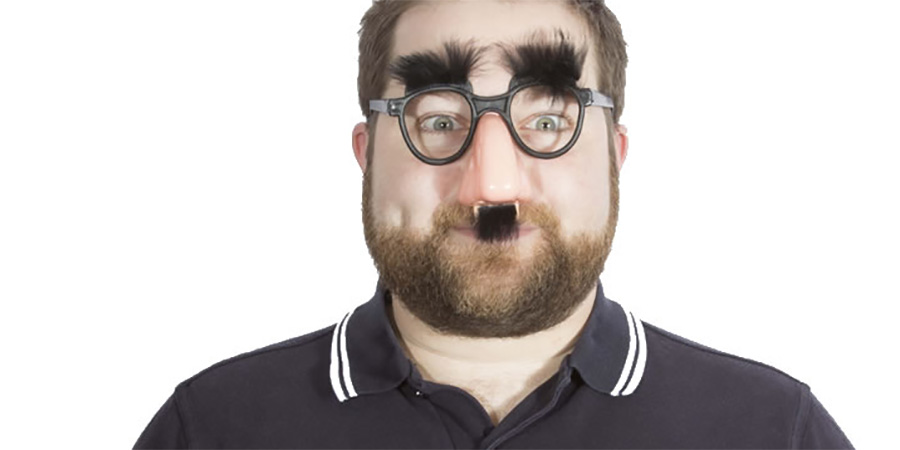 It’s a FGWG special this week as we look at surely the most terrifying types of gigs: shows for kids. Yes, you may picture total bedlam, like staging classical music for cats, but some acts are absolutely ace at it, such as our old pal Tiernan Douieb. He’s the likeable face/brain of Comedy Club 4 Kids, a popular onstage experience that’s now moved into earphone territory, too. Which is timely.

“Radio Nonsense is the official Comedy Club 4 Kids podcast,” says Douieb, then explains their finely-honed demographic. “It’s suitable for all ages 6-99 but definitely not 100-year-olds. And in fact after recent enquiries from children, 0-5 year olds can listen to it too, even though they have better things to do like try and eat their own hands or run into walls. As can 101-infinity year olds or immortals. Just not 100 year-olds, or yaks. You have to have rules.”

Right on. Each week Tiernan entices aboard a guest comedian “to answer important questions that have been sent into us from listeners,” he explains. “Previously it was a couple of guests in a studio, but with the lockdown and that, I now call one up and they tell me good tips for all the kids stuck at home as to how to make things more interesting and best ways to annoy their parents.”

Series 2 guests have included Lucy Pearman; Laura Lexx; Thom Tuck; Ed Petrie; Howard, Sam and Mabel Read; Bec Hill; The Storybeast; John-Luke Roberts; Eleanor Morton; and Mr Fibbers. And Tiernan hosting “because I’m greedy like that. It’s hard to pick a favourite moment, but Ed Petrie telling kids to smash things up, so it gives their parents something to do by spending time fixing them, made me properly snort laugh.”

CC4K are also doing shows for the NextUp Now platform, and offering handy home-schooling stuff on their own website. Meanwhile Douieb has made a video for the Royal Albert Hall, helping children cope with what’s currently happening. And a three-part how to do stand-up for kids tutorial at the Pauline Quirke Virtual Academy.

Quirkey! Plus he does adult stuff – comedy for adults, that is, not sexy business (as far as we know) – and you’ll find the links down below. First though: questions. 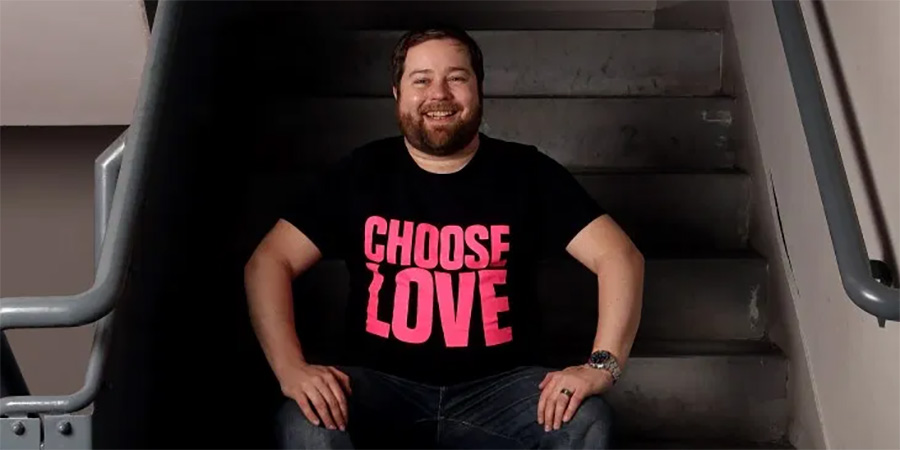 I think it was about 2006, though I could be wrong as I barely remember anything before last week. It was when CC4K was originally run by James Campbell and he saw me do a grown-up gig and said some of my material would really work for kids so I should do his shows. This was before all my grown-up stand-up involved politics and swearing, so it was actually silly and optimistic.

Back then I did stupid artwork while onstage as part of my set, so I turned up to a tiny venue in Camberwell with a big A3 pad, loads of pens and no real idea what I was doing. Apart from James hosting, I can’t remember who was on at all.

I was nervous like it was my first ever gig, let alone one to kids, and I shouted lots of jokes at about 30 very loud kids who all shouted back at me throughout. I scribbled nonsense pictures and then ran away.

Probably one that I was part of, but it’s my favourite because of all the bits I wasn’t part of. It was a show at The Bongo Club (RIP) in Edinburgh, during the Fringe in 2009 or 10 (see? No clue) where I hosted, David O’Doherty opened and was so very funny, but still – halfway through his set – a small girl asked him when the comedy was going to start and he got brilliantly pretend angry at her.

Then to close, Jason Byrne and Adam Hills did a double act and it involved so much madness, including Adam climbing under the whole audience and accidentally carrying a kid onto the stage when he surfaced, Jason being blindfolded and doing Irish dancing while Adam took the entire audience out of the venue, then bringing them all back in and onto the stage and so much more.

It was the most, silly, chaotic and yet child-friendly mayhem I’ve ever witnessed. 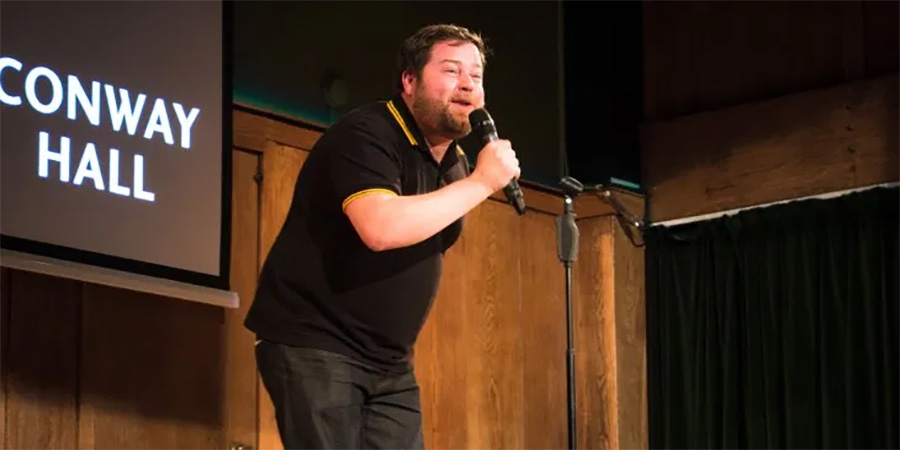 The worst – or weirdest – kids gig?

Luckily, we’ve not had many of these ever, but two spring to mind. One was a show at the lovely West End Centre in Aldershot, about 10 years ago, with Adrian Poynton and Paul Kerensa doing sets. One kid in the audience started shouting whatever the comedian was saying back at them, but with ‘revolution’ after it. So Adrian had a gag about bananas and this kid shouted ‘Banana revolution’. But he did that with every word.

We left it, as we were concerned he might have a learning disability and didn’t want to highlight it. After a short while, all the other children in the audience joined in. So everything was ‘revolution’ shouted over every line. It became totally unplayable! We found out afterwards, the boy’s parents just dumped him at the show then left, so he was just being a shit.

Another was only two years ago at Jackson’s Lane Theatre in Highgate, where there was a 10 year-old’s birthday party of about 30 kids sitting in the middle of the audience who screamed and shouted and heckled through the whole show.

We had one of the teenagers who does our workshops do a set in the middle of the show and they screamed at him to take his trousers off. It was so bizarre and just like playing to a drunk hen do!

All the parents of the kids, again, were out in the foyer having a drink so didn’t care. It was Stuart Goldsmith that managed to bring them slightly in line by the end of the show. We got a lot of complaints, but I remember that Ed Miliband was in the audience and seemed to find it very funny.

Can you tell straight away, which kids are going to be into it/bloody nightmares?

Yep. Fairly quickly. Much like with adult audiences. Except with kids gigs, a big indicator is how much attention their parents or carers are paying to the show too. If the grown up next to them is on the phone, the kid won’t pay as much attention to the show either, or adversely will demand more attention from the acts. If the adult is laughing along and taking part, the children usually are too.

But mostly kids are brilliant audience members. They are used to seeing shows, used to sitting still and listening in school and they are just so very excited to be there, and tell you things that are fizzing around in their brain. 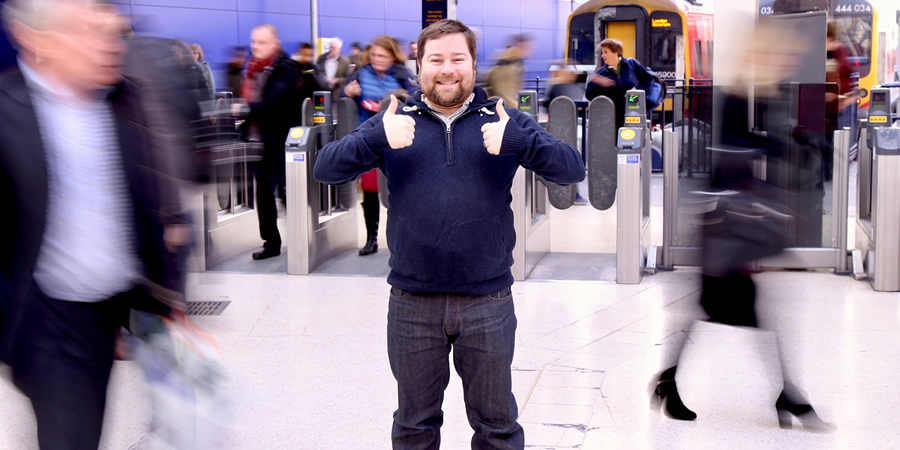 Is there one routine/gag you love, that kids just don’t get into?

Not one I use now, but I did a solo kids comedy show called Tiernan Douieb Knows Everything Ever where I pretended that I knew the answers to everything in the universe and kids could ask me anything, and I’d lie and make up something stupid. I also had some pre-prepared questions and answers, most of which worked really well.

But one was to do with the universe being made of Atoms, and I said that ‘Atom’ is one person called ‘Tom’ and then ‘Atoms’ is when too many people called Tom are close to each other and they gravitate towards each other and become bound to each other. It never really worked but I’d drawn four pictures for it so it had to stay in.

What advice do you have for comics who are about to brave a kids gig?

Think about if your material is in the field of what kids know about. They know a lot, thanks to school, the internet, their families, friends and ever-absorbing brains.

However, if your material is about say, mortgages, they just won’t care. Make it about things in their world of understanding. You can also be sillier than you can for adults, or at least more easily, as children will accept what you’re doing quicker.

Oh, and if you do swear by accident, then at least have a good way of apologising or getting out of it. A favourite was Iain Stirling accidentally swearing onstage at one of our shows at the Soho Theatre once; he called his mum who told him off down the phone in front of everyone. We didn’t get any complaints.

Are there particular heckles or reactions that stick in the mind?

My favourite of all time is still a small boy once asking Matt Kirshen ‘why is that your face?’

But one I had only a few years ago was during EdFringe at the Assembly Roxy. I was doing a cheap hosting trick of asking a child in the front row to whisper the rudest word they knew to me. The plan is that they’d say ‘poo’ or ‘bum’ then I could pretend to be horribly offended, shout ‘I will never say bum in this show’ etc then shout ‘how dare you’ at them and all that.

So I saw a boy, aged about six and thought he’d be good to ask. I said ‘whisper the rudest word you know to me, go on’ and went near to him so he could say something. Instead he very loudly whispered, so the whole room could hear it: ‘why are you doing this?’ Brutal.

How do you feel about where your career is at, right now?

A weird mix of worried and excited. I have no idea what will happen with comedy and it’s my main income, and that’s scary. Especially as I have a family to support and rent to pay.

At the same time, the way in which comedy is already evolving to fit around it with online gigs, brings in new ways to have fun with what you’re doing and you can potentially reach much larger audiences all at once. I did a gig in week one of lockdown that had over 2000 people watching, which is nuts!

Our first CC4K online show had 300, but they were mostly adults watching with kids so potentially 600-900 people, and the feedback has been so heartening. Plus I’ve just been booked for an online gig that, were I doing it live, I’d have had to drive four and a half hours to do, then four and a half hours back. Now I’ll pop upstairs, sit at my laptop and entertain the same people who would’ve been in the crowd but are also at home.

I’m still not used to it all and the feeling doesn’t replace that of being there, with a live audience in the same room as you, but I can’t not be happy about avoiding nine hours of motorway and a sad 3am service station Ginsters stop.


Filed Under: CBBC, Cbeebies, children, Comedian, Comedians, Comedy, Comedy Club 4 Kids, Comedy clubs
Previous Self employed parents are being let down
Next Looking for work and managing a toddler