Posted by Tiernan Douieb, 5 years ago on Tuesday, September 12th, 2017 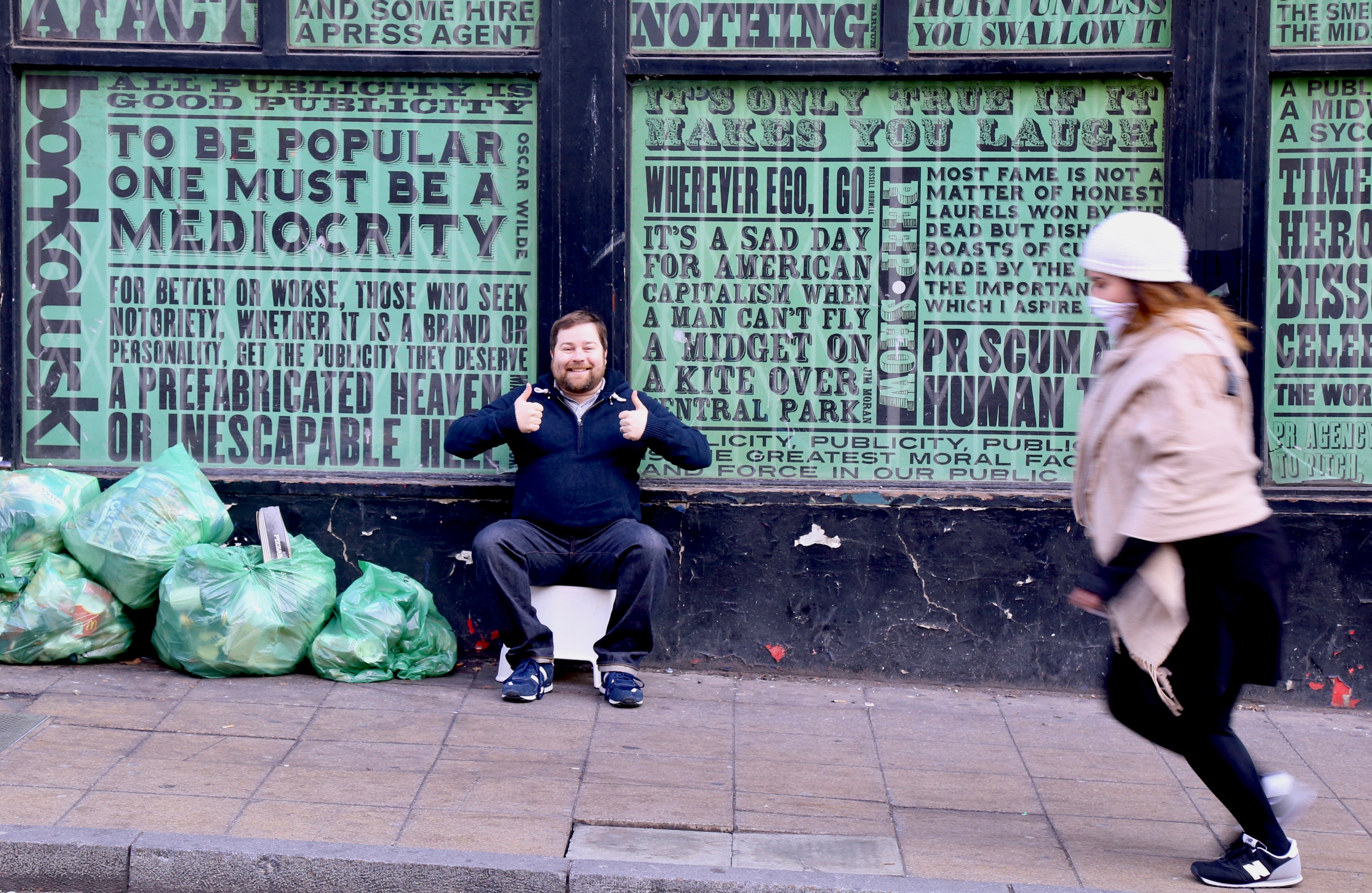 Flying home from Copenhagen on Friday…. yes, I’m starting a blog like that. Yes that is exactly how I want to appear. Like a jet setting international comic who flits around the globe like a mirth explorer, a merchant of hilarity. In reality of course, I did one gig in Sweden which was ok and ended with an audience member complaining to the promoter ‘next month do you have any acts who aren’t communists?’ Then one gig in Denmark which was brilliant fun but then I nearly spent all my wages buying a few beers after. I stayed two nights in cheap hotels that were basically hostels, like the accommodation version of someone claiming to be an adult while still living with their mum, and then I flew home on Ryanair. But obviously, you don’t know any of that because I started with ‘flying home in Copenhagen’ and so you’re probably assuming I had been playing to a sold out crowd at the Parken Stadium and then had to escape on my private jet after locals decided I should now be the new King of Denmark. Ahem.

I had the misfortune to sit in the middle chair on the RyanAir flight, the saddest of all plane chairs, wedged between strangers, no arm rest your own, no view and no easy route to the bathroom if you can make it there between all the trolleys full of scratch cards that fly down the middle every ten minutes. So headphones on, podcast playing, I decided to close my eyes and decided to escape reality with the rest of Malcolm Gladwell’s excellent Revisionist History series. But I’m not a total dick so I paused it for the pre-flight announcement. During this the flight attendant announced that it was the pilot’s last flight with the airline and would we please applaud him for his service to the plane. As the plane clapped with all the enthusiasm of a someone trying to catch a fly after donating blood from both arms, the woman next me leaned over and said ‘why are we clapping?’ She was an older lady, dressed in what looked like an expensive magenta suit dress, with a very Danish look about her. By that I mean strawberry blonde hair and an expression that very much said ‘my ancestors would’ve set you on fire’. All in all, and combining that with the fact she’d clearly not listened to the announcement herself, made me think she was not someone who I’d have thought I’d become bosom buddies with. Still I politely responded and told her what the flight attendant had announced and she pulled a very wry smile and said ‘well I hope get there ok then. I mean, it’s his last day. He might be disillusioned with the job. He’s probably been drinking.’ And so an unlikely conversation started between us as we imagined him sitting in the cockpit with his leaving cake, packing up his windscreen toys into a box and generally thinking fuck it to everything before flying us into the sea. We both laughed and then the conversation petered out as they often do, and I popped my headphones back on.

About ten minutes later the lady next to me tapped me on the shoulder. I paused my headphones with a slight degree of irritation. It had just got to a good bit where you think you know what the story will be but then Gladwell drops a sly hint that there is more to it all. It’s what he’s good at. You’re there thinking ‘oh how nice his dad was an eccentric scientist who made everyone eat broccoli’ and the wham, you’re suddenly put off ever using vegetable oil again for fear of an early death. Thanks Malcolm! So again I turned to my left and she said to me ‘Can I show you something?’ Already in intrigue mode thanks to my podcast, I said of course, and she proceeded to tell me about the newspaper she’d found in front her. ‘It’s all good news’ she said before explaining that it was a Danish paper than only reported good news and how refreshing a change that was. I agreed but couldn’t help but point at an article about a hurricane, to which she said obviously there wasn’t anything good they could say about that and we launched into a chat about what the positives of bleak situations are. So followed an hour and a half conversation starting with war being beneficial to medical breakthroughs due to the intensity of the work doctors need to do during that time. Then we moved onto the state of the world, as she was a Dane living in London with children, only one of whom is a UK citizen. She has so many concerns as to what will happen with it all and her anger at being uncertain about staying in her now home of 19 years, as she no longer feels Danish either. The frustration of 85 page forms for citizenship that demand you list every time you’ve left the country since you arrived, and how she, as a rambler, travels lots and has no idea, so gave up with completing it. She thinks a big problem of the whole negotiations are that British law is case by case based, but European is law based, and so the British government think they can change things just but the EU have set values they won’t change.

From there we talked of travelling and I now know I have to go to Burma but mustn’t visit Madagascar (mainly because it’s too depressing how crap things there are even though some people just take pictures of lemurs and ignore it), and how she tries her best to avoid tourists. I learned about the good nature of ramblers, how the best comedy for international translation is physical (she really loves The Boy With Tape On His Face). I talked to her a bit about comedy and she was incredibly impressed that I had made Finnish people laugh before. Then before I knew it, the plane was landing. She introduced me to someone she’d met in the queue who did laughter yoga and I started conversing with her, as the woman I’d been speaking to all through the flight disappeared off the plane. The queue moved along, I got off the plane, popped my headphones back on and silently headed home feeling all the more enriched for learning about a number of things I’d previously had little to no idea about or in the case of Brexit, a very different perspective on, being a UK citizen. It made me realise how much I cherish being able to speak to people all over the world. I’ve always enjoyed this but at some point, a few years back when I became a lot more comfortable with my stand-up, I also become a lot more comfortable holding a conversation with almost anyone. I often griped in my late 20’s that I wish I’d learned that skill as a teenage boy, not just for meeting girls but also, really, anyone. And while I was never too awkward striking up conversation, I don’t think I actually enjoyed and relished it like I do now.

In the past few months I’ve met an Anglo-Nordic couple who work in flight licensing & fashion writing, an Essex window cleaner and his boyfriend who I had a lengthy chat about echo chambers and Micky Flanagan with, a farmer who forklifted horses out of a river (and also had very pro-Leave views because of corn kernel counting, but was pro-immigration), a Brit abroad working with driverless car technology, and a very lovely older couple in Northern Ireland who were driving around seeing the sights for the last time before his Parkinson’s would make it impossible. I spoke to those two for ages. She had had a serious head injury rendering her unable to work or walk properly, but was sanctioned for her benefits because the place she had to go for her assessment was 15 miles away & up three flights of stairs so she couldn’t physically handle it. We spent some time discussing politics and it’s awful effects on people like them, then shared a beer and discussed the favourite places we’d been too. I felt a strange mix of sadness for their situation yet happiness that they were such fun, lovely people that I wouldn’t have met if they hadn’t stumbled into the gig I was doing. All of these conversations leave me with some sort of knowledge I didn’t have before, and more importantly, a reassurance that sometimes us human beings are all right really. I forget that often when caught up in the maelstrom of social media anger and unnecessary bickering and name calling. If the woman on my flight hadn’t tapped me on the shoulder Id’ have stayed in my own head and learned nothing about Burmese politics or Danish good news. As someone who loathes sanctimony, I don’t mean to extol some sort of special message with this, but so often I do forget that actually the majority of people are warm, interesting and full of experiences and stories to tell. By engaging in that sort of chat it very quickly breaks down all the crappy divisiveness that I keep assuming consumes every corner of the world right now because that’s all I see in my bubble. It’s nice to know that a lot of them humans are actually alright really and sometimes even more interesting than Malcolm Gladwell.

Well apart from that man who complained about the ‘communist comedians’ of course. But hey, there’s always a few dickheads.

My Partly Political Broadcast podcast has started again. Check it out here: