Posted by Tiernan Douieb, 6 years ago on Tuesday, December 8th, 2015 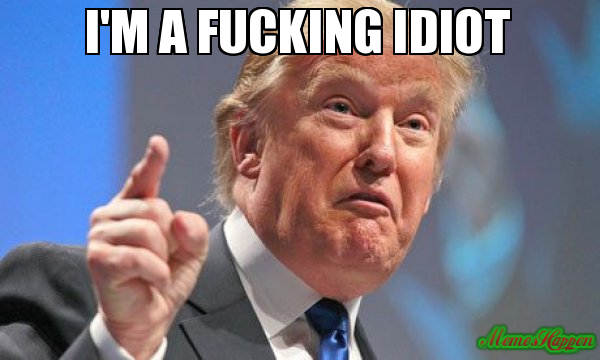 President Trump flicked idly through an Encyclopedia Britannica. He couldn’t pronounce the title, but he liked all the pictures and without this book that he found on the shelves of the White House, he would’ve known about so many other terrible things that existed in the world. As a result it was the only book he hadn’t yet banned. Even then, only his copy was saved, as he worried what would happen if the terrorists got hold of such information as how many species of lobster there were, or where the kings of Bugunda were buried. He vaguely remembered someone saying that a resource like this existed on the internet, but he had since banned all of the world wide web in order to stop exactly that sort of thing happening.

The internet was banned just after Muslims, even though he wasn’t entirely sure what either of those were. Muslims, he had concluded, whatever they were, didn’t seem all that popular, and it was his banning of them – were they a type of cloth? Perhaps a corn based snack? – that lead to him becoming the leading Republican Presidential candidate. It had helped that Ben Carson had to drop out after shooting off his own foot, believing his shoelace was a venomous snake, but the Muslim thing was also definitely a boost. So after he banned whatever those were, he heard that some people on this interweb thing seemed angry and said he was like someone who hits things and that he had awful hair. He did like hitting things so they weren’t wrong. Insulting his favourite body part that wasn’t strictly part of his, or in fact any living creature’s body though? That was too far. So presuming it probably ran on some sort of anti-Christian magic anyway, he banned the internet too.

With the US no longer able to access anything online, there was mass confusion. Unable to protest in any way other than a sarcastic tweet or an ill informed comment on a webpage, society was rendered even more apathetic than before. The lack of Muslims in America meant many several hospitals lacked doctors, the army was reduced by many and the education levels of the country were instantly reduced by a vast amount. People formed tiny groups, clusters, or Trumps as they became called. Hiding in the mountains with just their guns and a lack of knowledge. Trump became banned from several other countries around the world for his bizarre and racist opinions. He didn’t know what this meant but he didn’t care as he’d burned his passport long ago on account of it having a chip in that people may be watching him from. He also didn’t want to visit other country’s anyway as they probably eat Muslims and used the internet and that scared him.

From then he began to ban everything. Bananas because they looked like an upside down smile which was bad. It was pointed out to him he could turn them the other way round but the people who told him that were then banned. Cats were banned because they were just small lions and therefore dangerous. Then highlighter pens, bubble wrap, paracetamol, the word llama but not llamas themselves, then llamas themselves, vacuum cleaners, ears, and the list went on.

Now sitting barefoot (as socks were banned) in an empty room (furniture also), with no windows (yep them too) all alone (people except Trump were banned) with his sole copy of Encyclopaedia Britannica, President Trump wondered what he could ban next. He thought about starting from the beginning. Turning to the front of his special big book he found ‘A’. He paused for a minute and flicked through the pages. ‘Aardvarks’. Nope he’d banned them 3 years ago for looking like bald rabbits, which he’d banned 4 years before. ‘Abacus’. Nope. Already banned because it had too many numbers to count on it and that was confusing. Flick, flick, flick. ‘Air’. Yes he thought. ‘If I can’t see it, then how can I trust it?’ Donald pondered. ‘I’ll ban air’.

He thought about sucking it out of his room but realised he had banned vacuum cleaners a while ago. He wondered if shutting windows might stop it coming in, but of course, windows were also banned. Then he realised, he could stop it getting inside him just by not breathing. Donald felt so proud of himself. He stuck two fingers up his nose and closed his mouth tightly shut. ‘I’ll show them’ he thought. ‘I can be in charge of everything.’ In his last thought as he began to black out, and his lungs tightened, he realised that perhaps, just perhaps, he should’ve banned death first.