I did something I’ve never done before yesterday: buy something specifically for the use of exercise. Well I say never before but in the past there have been half hearted purchases of dumbbells which still sit on my bedroom floor waiting for their once monthly use where I reignite my memory of just how weak I am but don’t ever use them frequently enough to change this. Its less an exercise incentive and more just a regular check incase I’ve developed super strength in my sleep. One day that will happen. I have also, over the years bought things that were additional to various classes I attended. Judo robes, a squash racquet and breakdancing wrist bands all sit somewhere within the cupboards and boxes of my parents house knowing full well the only time they will ever see the light of day again is in thousands of years from now when archaeologists discover them all at once and presume there was a sport that involved dressing up in martial arts clothes to hit a shuttle cock whilst doing hand stands.

Well yesterday that trend changed when I bought some trainers specifically for going running in. That’s right. Running shoes. I haven’t been running for about two months now due to shin splints which insisted on making me hobble around my designated racing path like someone attempting to do the robot badly for too long. So on recommendation I trudged to a shop in Central London that specialise in making you get on a treadmill with your jeans rolled up so they can see just how malco-ordinated you look and everyone walking past outside can’t point and laugh. It turns out my left leg is a twat, and so after a few minutes of explaining this to me in kinder words, they pulled some trainers off the shelf and said that by parting with my hard earned cash, I can run again like a happy Forest Gump. I bought them yesterday. I haven’t been running today. This is already bad as it seems that now there are just a ghastly yellow and silver (they swore the ones I needed were only in that colour) are already wasting away. It can only be a matter of time before ‘Kung-fu Squash Stands’ gains an added element of fancy footwear.

Muchos respect to all the students on the demo today. I should be there but along with my complete failure to go running today, my failure to go marching has joined it hand in hand. I very much hope it makes a difference and its brilliant to see on the news that at least 24000 are out there. Knowing journalism, that means probably about 40000. It really upsets me that Cameron is currently telling student in Beijing that democracy is the best way, yet conveniently managing to avoid showing them the £9k proposed education fees as a case study. I really worry that he’s out there purely to find out how far he deny people their human rights without a UN sanction.

Good luck all marchers today. Hope its a peaceful affair that will highlight how important affordable education is.

Marina and the Diamonds were amazing last night. After an amazingly 80’s montage of fluorescent images on the backdrop, she strutted out in style and belted out pretty much all the tracks we wanted her to. I love her. Corrie, who accompanied me to the evenings musicalness, gained some sort of a girl crush. The two lesbian women who stood in front of us and insisted on continuously putting their hands down each others trousers (note men: this was in no way attractive at all. More importantly one of their quiffs kept getting in the way of my sight line), wouldn’t stop wolf whistling. Her voice was awesome live. And at one point she has a glowing heart belt and a giant plastic hamburger taken from a 1994 Blur tour. Basically I love her. I was tempted to try and write up some clever critical analysis and get all wordy on your ass, but its difficult when overall it was just brilliant and I love her.

Here is a picture where you can’t really see anything: 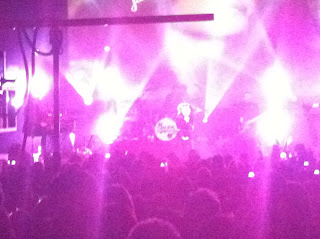