A bitty blog today as I can’t be arsed. Its sort of a day off for moi, with my only two prime objectives all day being 1) buy Scott Pilgrim on Blu-Ray and 2) go and see Marina and the Diamonds at the Forum tonight then persuade her to marry me. Ok, so the first part of the plan is pretty easy and the second not so easy, but I reckon if I tell her I have Obsessions and insist I know she’s not a robot, I reckon she’ll fall for me immediately. The T-Dawg always gets what the T-Dawg wants. And when I say always I mean ‘mostly never’. I still to this day haven’t got a house on wheels (not a caravan, a house. On wheels) or a pet tiger. Actually there’s loads of stuff I want and really haven’t got. I bet Marina could get it for me. But then it’d arrive and I’d look happy for a while until she repeatedly asked ‘Are You Satisfied?’ and it’d just annoy me. Its like I’m never allowed to win. Sigh.

So erm, some very quick things:

– Its got actually cold. Not sure how and when that happened, but someone sucked the warmth away and I only noticed last night. However, I was properly prepared by wearing all possible layers to the extent where I feel content that no possible cold could penetrate my being unless it used teleportation. The downside of this is being unfeasibly hot on the tube and not being able to use my iphone. I suddenly can see why the Luddites had a point.

– I did a nice new gig at The Millers near Guy’s Hospital last night called Gig For Giggling. Was much fun and I recommend heading to the next one if you live round there. Most importantly there were some rather good new comics on which was always nice. Part of me sees new comics that are good and is genuinely pleased there is up and coming talent. Then part of me realises they may soon be taking all my work away in a year or so and I begin to plot there death. Bitter much? Yes. I’m sure Marina can order hit men for me.

– This was in the loo at the gig. Made me laugh a lot. 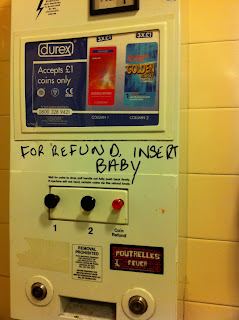 – I’m currently reading Coconut Unlimited by Nikesh Shukla. Apart from the fact that its brilliantly well written, contains great characters and is very funny, its currently stirring up some grand memories about my first discovery of hip-hop in the early ’90s including seeing the cassette cover of ‘Muse Sick An Hour Mess Age’ by Public Enemy and being blown away by the drawing of a skeleton holding a gun to its head, or Karl Black playing me Snoop Dogg’s Doggystyle for the first time at the back of the science class in Year 7. I’ll be telling Marina all about this later.

That’s it for today. Sorry for a half arsed blog but I will give you another half of an arse tomorrow and you can then sit down. I’m sure that’s all you really want. With any luck Marina will write tomorrow’s blog for me.