Everytime I support Tony Lee on tour, I say to myself and most people willing to listen to my repetitive dribble, that I can’t watch him do such terrible things to the people that he hypnotises and that I have to go and stand elsewhere. I say I could never do what he does, as I’d feel too guilty making students do things that they will then get nicknames for for the rest of their university life. Then after spouting all that, I remember that he can only make people do stuff they really want to do, and I completely go against what I’ve just said and spend the rest of the night laughing at people having sex with chairs against their conscious will and infront of hundreds and hundreds of fellow students. Its much the same as all those times I’ve rubbernecked on the motorway to look at a crash site, knowing full well if I saw a dead body or severely injured person that it would scar me for months. I still look though. And often my looking means I swerve while driving and nearly crash myself. Selfish crash victims. Distracting other people into being crash victims. I wonder if there has ever been a crash so viewable that everyone else watching has also crashed in a way that is so viewable and therefore, in a chain reaction caused others to try and see their wreckage and also crash until all the cars in all the world have crashed? Probably not, or we’d have less cars around now. And people. But it might happen. You never know.

Last night was the first night I actually couldn’t watch what was happening on stage. To be fair, it was nothing to do with what Tony Lee was doing, but instead one of his participants. We did two shows last night, mostly because we’re hella popular. And when I say ‘we’re’ I mean ‘Tony’s’. I had no part in making anyone turn up. During the first show a, and to put this politely, rather large lady got up to volunteer. There was already something odd about her when she strode up, as rather than the nervous slightly excitable other participants, she was far too confident about it all. As the night proceeded she would react to things in a way that suggested she was never hypotised in the first place. I’ve got good at noticing these signs due to working with Tony. Things like her being distracted by brushing her hair and noticing other people around her, whilst the real dozers were out cold or only focusing on what Tony wanted to. I’ve got pretty good at this since working with Tony and while I could never mind bend anyone myself, I could most certainly tell you if you were mind bent or not. Not that you’d be able to ask me if you were hypnotised. Unless you were told to ask me, in which case the point of it all is somewhat defeated. So the, er, big lady, was almost definitely not under. When this woman was persuaded to attack one of the security guards, she screamed ‘I’m good at this, I’m a dominatrix’ and properly lay into him. Her presence had a whole air of ‘someone who just wanted attention.’ It was sad and quite cringe making to watch, especially as some of the other volunteers were genuinely brilliant. The show finished, we had a 45 min break where the room was cleared out, and as they let the next audience back in, the big lady sat down again. She must’ve bought a second ticket. Then when Tony asked for anyone who fancies it to come up on stage, she raced back up again. AGAIN. Someone willingly, after being humiliated on stage, wanted to come back up and be humiliated again. I met someone yesterday who was a participant two years ago and would never think of getting back up, yet here was this woman returning after only being there less than an hour before. It wasn’t humiliation for her, it was the most saddening attempt at attention seeking I’ve ever seen.

Don’t get me wrong, I shouldn’t be criticising any attempts at spotlight grabbing when that is essentially what I’ve carved a career round. If I didn’t harness my need for constant ‘all eyes on me’ instant gratification, then no doubt, being the sort of person I am, I might unleash it in other awkward areas of society. I’d do party tricks that make me look like I’m just lonely and the suchlike. As it is though, I know when I’m due on stage and even thinking about participating in someone else’s show or joining in when its not my turn makes me feel uneasy. I’m very much offstage when I’m offstage. Watching this woman so hungry for attention made me feel rather sorry for her. Then she attempted to have sex with a chair while not being at all hypnotised and suddenly I just thought she was an idiot. A massive idiot. I think age has given me less tolerance with these sorts of people. There was a time when I’d sit back and think about how its a confidence problem, or an inferiority complex or some other excuse. Now, I just think ‘she’s a dick’ and pray that I never have to engage in conversation with her for fear of getting drunk and being really really rude. I didn’t have to talk with her luckily and instead I drank snakebite with young people and consequently have realised its called such because its hugely venomous. Overall though, a very fun evening apart from that massive blot on the horizon.

Sorry for vitriol. There’s not really a point or anything like that to today’s blog, other than if you are someone like that, please stop it. Stop it for me. And you. And everyone. And then go away.

I’ll leave you with this, in an attempt to cheer up what was otherwise a cathartic attempt to get that off my chest: 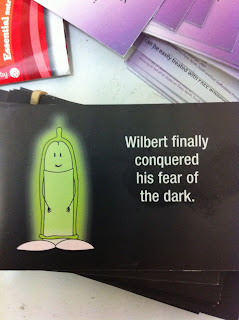 Surely if he’s that scared of the dark, shagging is not a viable pasttime in the first place?