One of the many benefits of comedy is being able to do gigs in places you otherwise wouldn’t be able to go. I’ve blogged before about various gigs in RAF training bases, Cambridge University balls, and barns owned by Ian Fleming’s descendants. Most of these places tend to be normally off limits to me due to my class and upbringing rather than anything else, something I’m not remotely sad or displeased about, but it does mean I tend to view all upper class situations with a hint of caution. I don’t understand their investments, or soirees, or playing golf every weekend. Nor can I comprehend living without any money worries. I mean, just imagine if money were no object? Well, it’d make paying for things in cash pretty difficult for a start. Arf. But its intriguing to me how the other half carry on and I enjoyed nothing more than rocking up to one of Cheltenham’s most prestigious private boarding schools wearing just jeans and a tshirt with a whale on it as though to say ‘yeah I’m not like youse lot. What of it?’ The gig was inside the sort of large oak panelled hall that led me to wonder if after the show I needed to get the sorting hat out and see who was in Gryffindor and who Slytherin etc. Depsite me not understand what possible work ‘finding new business for Cheltenham Rugby’ entails, it was a lovely gig. Cheltenham, admittedly, is the only place where one audience member will lie about being a jeweller called Myles, only for someone else in the audience to actually be a jeweller called Myles. They also only liked being referred to as Cheltonians, and not Chelter Skelters as I kept calling them. Overall though, it couldn’t have been a nicer gig.

Our ‘green room’ was one of the year 7 classes and whilst its probably a tad wrong to sneak around a school room, I was slightly disturbed by one of their wall exhibits. Entitled ‘Le Zoo Bizarre!’ it was a menagerie of horrific mixed animal photoshop creations with each students writings in French about their monstrosities: 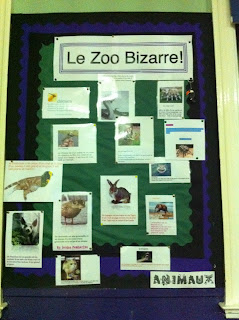 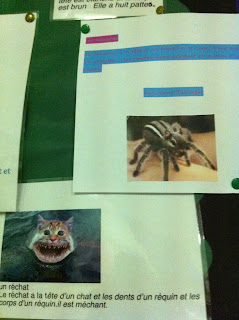 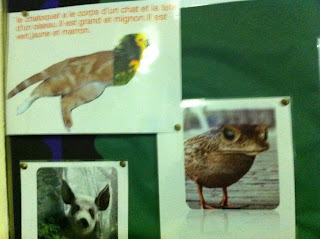 Is that not one of the most disturbing things you’ve ever seen? I’ve seen some of those pics online before so I know a few were just grabbed from there, but either way, what happened to just writing about animals? I started to look through other bits of information, just to check that the headteacher’s name wasn’t Doctor Moreau. I panicked about what would happen if they didn’t like my jokes and I’d leave there some sort of ghastly human-lizard hybrid. I wouldn’t mind certain aspects of that. Wall scaling, and being able to shed my skin instead of shower, all good. Don’t really want to eat flies though. Though saying that, hopefully that’s when the human bit would come and I could at least put the flies in a sandwich. Really though, it’d be much easier not be a lizard man.

The nastiest one, is the chipmunk spider thingy. How have they combined all the good natured qualities of the Rescue Rangers with all the eight legged evils of arachnids? I can’t imagine anyone would invest in Alvin, Simon and Theodore’s music if they scurried about like that and shot web out of their arses. Horrible. Really horrible. The show was a fundraiser, and considering how nice it all was already, I was wondering if this money is going towards an evil lab somewhere above the big hall in a tower at the back.

Do people that are this privileged know that that’s what everyone else thinks of them? That if you board at a gothic school, and make pictures of cat-cockerels, then chances are, we won’t ever trust you. There’s a high chance you’ll go on to accidentally cause a zombie infestation or be put in the Cabinet in charge of schools and education under a coalition government. I escaped very quickly after the gig and hoped they hadn’t planted a monkey-shark in the back seat so I’d keep quiet.

Off to Keele today. That’s further away than I want it to be, and it’s raining. Bah. If only they’d made me part bird, part fish, part man, then it’d all be ok. Bah.

Fat Tuesday returns this week, and we still have tickets left. It really is a line-up I’m so excited about with Andrew Maxwell, Hal Cruttenden, Mike Wozniak and Colin Hoult, all of whom are excellent. If you live in North London or even anywhere you can get to Islington from, then get your tickets here and rock along on Tuesday: