Its my day off today so I’m gonna keep this blog brief, like a pair of pants. (Regular blog readers from some months back may have missed that phrase. Well fear not, I fully intend to bring it back into the vernacular). So here is just a few notes about the last day or so, then tomorrow usual blogging shall resume. Sorry for any inconvenience. Let’s roll:

– The comedians vs critics football game was easily the most fun I’ve had all fringe. This is not just because WE ONLY WENT AND FUCKING WON! 3-2 to the comedians! 3-2 tooo the comediaaaaannssss! 3-2! 3-2! I didn’t score any of those goals of course, but I did do a fair bit of running around and didn’t die once. At the end I even did a slide tackle that was possibly the best football related thing I’ve ever done in my life ever. I even scraped my left shin whilst doing it. The whole afternoon started with some worry when myself, Keith Farnan, and Eric Lampaert were 3 of only 5 comics there, compared to the 25 odd critics (and they were odd. Tee hee), and so much discussion about being the 300 of football teams occurred. I was revving up to shout ‘THIS IS SPAAARTAAAA’ and kick one of them down a well when our awesome team captain Rob Rouse appeared and cheered the proceedings up by explaining that whilst he was no good at football he was very good at ruffling hair and patting bottoms and therefore that’s what would happen whenever anyone scored. He was good to his word too. The critics team were good sports and the comics played their comedy socks off in the glorious sun. Much much fun. And I got to have a go on a vuvuzela. What more could you ask for? How about doing it all for a good cause – Amnesty International’s Free Zarganar campaign – and winning a tiny plastic medal and champagne that ended up mostly in my hair? Well tick those boxes my friend, for it was a morning of aceness. Sadly now today, my right leg and back has decided I am a twat and deserve punishment for yesterday’s fun and I shall spend today walking like Limpy McLimperson. 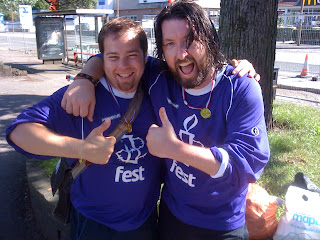 – Other things from the football match to note:

I can’t do handstands anymore. Joel Dommett still can.

Tim Arthur has promised me I will get an official Time Out quite saying ‘Shins Of Steel’ soon. I will put this on all my posters till the end of time. Even though it doesn’t say anything about my comedy whatsoever. FACT.

Some people are actually very musical with vuvuzelas. I am not one of them. Neither is Rob Rouse.

Keith Farnan gets angry when people take too many pictures. I think he still believes they steal your soul. He is from Cork after all.

– The quiz with Farno face was much much fun. Top points to Scott Wanker who were the team that won overall. No points to all the people who boo’d the T-Quiz round of nonsense. Just because the questions and answers don’t make sense doesn’t mean you should get angry.

– Compared the Late Show last night. Much fun though there were too many people called Adam in. I think I had drunk too much and decided it would be funny to say ‘Adam Adam Adam Adam Adam’ repeatedly as though it were a theme tune to something. The audience disagreed. I stopped and did actual jokes.

– Being kissed by Jim Jeffries is one of my least favourite things ever. FACT.

– Being tickled by Shaun Weager is almost as bad.

– Finding a teddy bear in the Loft Bar that you love and then having it taken away from you is worse than both of those things.

– All three of the above suggest why I probably shouldn’t be allowed in the Loft Bar ever again.

– Bloody love being given random Kinder Eggs by people. And Finnish chocolate. Its like a group attempt to kill a diabetic, but its brilliant.

Right, I’m sure there’s more but I’m going to kick comedy in the face and bloody well enjoy my day off. Expect an excited and over rested blog tomorrow. BYE.

Previous Fringe Day 12: Three Lions and One Small Bear
Next Fringe Day 14: Back To The Grind