Fringe Day 14: Back To The Grind

Its an odd thing, but after having looked forward to my day off pretty much since the fringe started, I’ve now had it and I’m worried its been detrimental rather than useful. Prior to that, I had momentum. I was a veritable office desk toy of comedy. Tap me and I shall swing. I don’t know what that means. What I’m trying to say is that I was – as we in the industry like to call it (I use the term industry loosely. This is mostly because I don’t want to anger any Luddites) – gig fit. This is when you gig so much you can walk onstage without any prior thought and slam dunk the funnies like weird basketball player who unfairly treats village idiots. Or something. But today, after a truly excellent day off, I just feel all a bit tired and much like I want to have another day off please. This is not great. Somehow I need the energy and care back as the next bit of the Fringe is the longest run. Like the post Christmas term at school. Only with less colouring in. 13 shows left and no more breaks. Unless I physically break something. Which I may do if I really want a day off. It would definitely ensure that as there’s no way of getting in my cave if your legs don’t work. Hmmm. This might be a plan……

Yesterday was so much fun. If there was a way just to do all that again I’d be very pleased. The day bit was spent with my friend Laura and we decided that we would stroll 3 miles to Portobello beach to the east of Edinburgh. Though the walking was initially because Laura has some sort of odd issue with getting freaked out about buses – the Laura on the bus goes ‘aaaaarrrgghhh aaaarggghhh arrrrrgh’. Its not as catchy as the usual verses – but it turned out it was the nicest thing to do. I love walking. You see loads of stuff you don’t normally get a chance to see, such as really beautiful bits of the city we wouldn’t have stumbled on otherwise, and also odd stuff that Laura noticed such as grow bags on a roof that looked like dead cats and Mo Ratterace: 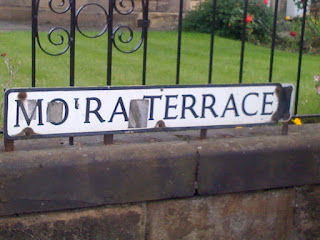 I refuse to explain this on account of the fact that it will undoubtedly not be funny when explained.

After much idle wandering we made it to the beach. I love the sea. I’m really bloody pleased it exists. I mean if it didn’t fish would be pretty pissed off. Boats would to. And it’d probably make divvying up country borderlines a tad harder too. But excluding those things, I’m glad it exists as I think there is very little like calming the soul just watching the sea. I would happily do it for hours but eventually the tide would come in and I’d probably drown and that would be bad. No intention of getting in it, as its full of sharks and leviathans and stuff like that, but just watching it lap back and forth on the beach with no one flyering or telling me how their show has gone, was the best thing in the world. Admittedly if someone had have been flyering there, I’d have been mightily impressed. Mostly with their dedication and severe lack of understanding that flyering that far away from the fringe would be a huge waste of time. Then there was homemade ginger beer, banofee pie, a small Amy Pond made with kitchen roll and serviettes by Laura, a funpark that had an absolute vacuum of fun and a crossword (not ‘Hate!’ as that is also a crossword. BOOM!). Then to mix everything up we decided that having been at sea level we would walk as high above sea level as possible and headed up Arthur’s Seat to witness the wild roaming haggis and views of Edinburgh whilst easting marmite sandwiches and having to stop to get breath back from laughing everytime one of us nearly fell over. Much much better than the usual Fringe highs and lows. 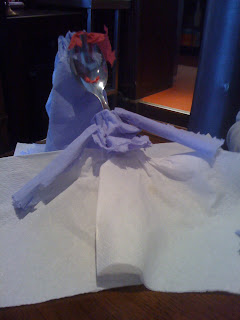 I then slightly ruined all the chilling I managed to do by heading out listening to Rage Against the Machine, drinking loads of beer, getting obnoxious about a quiz based around ping pong and a pervert host who should never be allowed near women again, and then more beer and an excellent excellent Full Mooners. Then more beer. And more. And at 6am I suddenly realised I hadn’t really rested at all. Brilliant. Well done dickbag. So what I need is another day off please. Can someone sort that out please? Thanks very much. And no, I’d prefer not to break anything if possible. Unless its dancing. Or a car’s motion. Thanks thanks I’m here all week. Sigh. Clearly actually stopped the comedy office toy. I will wander round Edinburgh asking someone to gently tap my head to get me back in motion. I will regret this after the first go. FACT.

Oh and my legs hurt. Stupid walking. Maybe I should break one, then I’d get a wheelchair too. This is seeming more and more appealing by the minute……