Firstly, the as yet unnamed webcomic by myself and Mat Wandless, pt 2: 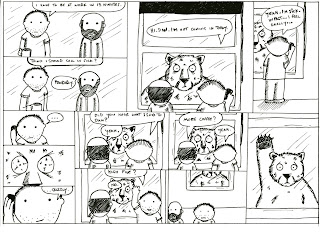 The first part was here if you missed it: http://www.twitpic.com/1v1v65

Secondly, I went for a run this morning. Not that dissimilar to recent events where I have also gone running. Nor is it particularly interesting. No. So why on earth am I telling you about it? Well blogsters because this run only lasted 10 whole minutes. Pretty pathetic huh? Taps can run longer than that. Actually that’s a silly comparison. Taps can run for ages. Except if they do, then you waste water and people get all angry ‘cos you’ve broken the environment and you’ve flooded the house and its leaked to their flat below and everyone gets sad. So why did I only run for 10 minutes despite doing 30 over the weekend? That’s in one go btw, not in small 2 minute bursts. That would be easy. No 30 minutes in one go. And my legs didn’t fall off or anything. Well today, I only ran 10 minutes, because ten minutes in, I accidentally swallowed a massive fly and coughed my guts up. Not literally. I wouldn’t be here typing if my guts were somewhere on the parkland walk being eaten by a dog.

I don’t like accidentally swallowing a fly for a number of reasons. Firstly, I don’t want to have to eat a spider to deal with it. I have an innate fear of spiders and eating one, just to deal with a fly would be the worst thing in the world. Ever. Not only that but my parents cat is looking at me with fear, knowing it will be only a few steps down the line. I mean really, I’ve never understood why at any point in the story of the old woman it doesn’t just say ‘oh by the way, this woman is mental’. I mean really, she never thinks at any point ‘wow I can eat some pretty dry crackers and not die, surely my digestive system can handle a small fly?’ No. She insists on eating the entire food chain in order for eat part of that chain to eat the bit before it. Yet it never occurs to her that if she is unable to swallow a fly properly, then how on earth will she digest all the subsequent animals? Complete idiot. I presume there were several prequels where she eats a tomato and then has to eat several aphids, the ladybirds and so on and so. That book should come with some sort of warning on it.

Secondly, I’m a vegetarian and I’ve never wanted to swallow a fly in my life. Even if I wasn’t veggie I doubt flies would be high up on my idea of cuisine, but as I am, I really didn’t want to take its small buzzy life. Don’t get me wrong, I don’t like flies. They puke on food, they fly, and other stuff. I’m sure there’s other stuff about them that really pisses me off, but those two are definitely the worst. Nobody should ever puke on food ever. Even if, like flies, you’re going to eat it again, you still shouldn’t. Not nice. And I can’t fly, so it really annoys me that flies can. Not only can they fly but they can walk too. Whereas walks can’t fly. However on the other hand, birds can fly, but flies can’t bird. So I suppose its fair. But I didn’t want to eat the fly. If I was a Buddhist I’d be doing whatever it is Buddhists do when they kill an animal by accident and don’t want to return to the next life as that animal. I don’t know what it is, but I don’t want to return as a fly, though I suppose I would then be able to fly and that would be good.

So fly went in gob, much spluttering, running stopped, coughing, run ruined. Then I tried to start running again and my legs stopped working. My body had decided that if I was to only fuel it with flies then it wouldn’t work for me. Either that or the fly ruined me from the inside. Whatever it was, this is how my day started and I’m fairly sure it will all go wrong from here.

That wasn’t interesting was it? No. Sorry. Go back and read the comic again. Its got a bear in it. I’m going to go and watch the budget and cry about how Osbourne’s idea of saving the country from further debt is to make all the poor people so poor they starve and die and therefore the Tories can steal all their inheritance tax and give it to the banks. I’d better get used to those flies if today goes the way I think it will.

Oh and tonight’s Fat Tuesday now has an added special guest. You might want to come along. Here’s the tix link:

Previous The Thunder Child
Next Grizzologist