Its too hot to do anything again today. It was the same yesterday, which I only realised once doing things. These things involved carrying and walking and both of those meant more tshirts and shower water were used up than is actually necessary. I wore my favourite new tshirt of a bear fighting an octopus too early on in the day yesterday and after carrying a few things for 30 minutes the only winner of that fight was body odour. In a real fight, body odour probably would just enrage the bear more due to pheromones or whatever. Probably. I’m not a zoologist or a bear specialist. Though I wish I was a bear specialist. They probably have a proper name like bearist or grizzologist. I will look into such things. The octopus would probably not be fussed by body odour as they don’t have noses (they might have noses, I don’t really know. I’m not an tentaclist. That is a word, as of now). I forget how to sensibly plan for the heat. What you need to do, when its all hot and sunny, is…..nothing at all. That’s the best way. Like all the people lying in Finsbury Park this morning as I strolled through, you should just lie there and sunbathe. At least I think that’s what they were doing. They could have all fallen out of the sky in summer wear and died. Really I should have gone round shaking all of them to check if they were ok. One of them looked like John Locke from Lost. This only goes further to prove my theory about them falling from the sky. The lack of plane crash does not.

It is the England game today that decides whether they can stay in the World Cup. I also have a preview tonight and don’t really care about the football. In fact I would go so far as to say that for purely selfish reasons, I hope they lose. This is purely because suddenly my gig diary will get that little bit better instead of all the gigs cancelled for stupid football games. At the same time, I’m gigging in a fairly rowdy club this weekend and feel I should probably watch it in order to make some jokes. Compromising my beliefs and interests for populist demand? Why would you do such a thing Dooyebbie? Well, when I like to think of it as survival instincts. Think of me as the Ray Mears or Bear Grylls of comedy. In fact, definitely Bear Grylls, now that I’m going to be a grizzologist. Football + gags about football = not being glassed by angry stag dos that will question my manhood by me not liking football. Many of you might disagree but I quite like my face. I prefer it without glass in it. Therefore I prefer to watch football than have a glass filled face. Simple. Unlike football. What is more likely to happen is that I will write jokes that I think are funny but don’t actually make sense. Stuff like ‘offside? Onside more like’ or thereabouts and I will just then have watched football and still have got glassed. There is very little about this that can go right.

How is it, even though we are now in the future, it took me two hours to update my iPhone this morning? Hmm? Two whole hours. Why didn’t I do it on Monday when the update was released? Well because I don’t care enough. And now I wasted two hours just staring at a little white bar get slowly more and more full just so my calculator icon looks different I reckon I could have left it even longer. The next update had better have an app that allows me to fly and another that makes me tea in the morning or I will throw my iPhone at Steve Jobs’ mush. (I wouldn’t. I love my iPhone)

Fat Tuesday was mental last night but much fun. Two very good previews from Josie Long and Maff Brown. You should most definitely go and see their shows in Edinburgh for sure. Some lovely new material from Kevin Bridges too. In terms of mixed bill of comedy, it was the oddest one we’ve had yet, but our crowd went from Maff’s quick gags to Kevin being angry about the world cup to Josie talking about feminism and role models. I like our crowd loads. They are better than your crowd. FACT. What you wanna test that? Yeah well maybe my crowd and your crowd should have a fight. Mine would lose, but they’d knit everyone arm casts afterwards and that’s better. Why do I love the FT crowd so much? Well not only are they comedy savvy and open minded about what to watch, they also do things like…… 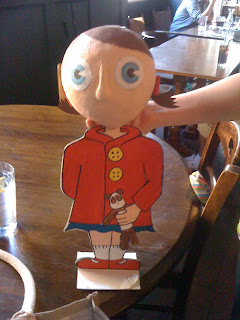 ……this is Little Sanna, as made by the ridiculously talented Sanna King (@Sannapanda twitterpeoples). Sanna is a regular Fat Tuesday goer and due to some goading by me on facebook, she made and brought Little Sanna along to the gig yesterday as a tribute to the great Chris Sievey aka Frank Sidebottom who sadly passed away this week. It was the least we could do to give her free entry to the gig, although ultimately the amount of time it probably took her to make it, means that her ticket was less than the equivalent of minimum wage. Hey ho. Still I’ll be popping the £7 that we would have got with another few quid towards the Frank’s Fantastic Funeral fund, which if you don’t know about, you should read here:

It was a real loss to the world of comedy and he deserves a proper send off as far as I’m concerned. I never met the man but I watched him on telly many times and watched on repeat youtube vids of his Manchester Medleys. He was ace. RIP Chris and Frank.

Also, should you want to see Sanna’s other awesome art stuff she does full time, have a look at her website on www.sannapanda.co.uk which has links to her facebook fan page and other stuff too. What she doesn’t know is that I will be expecting a new art project every week or I won’t let her into the gig ever again. That’s what happens. 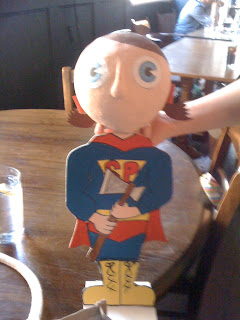