I swear taxes are the most boring thing in the world. The only thing more boring would be watching paint dry on taxes. Actually, that’s not true. That would at least contain the relief that you don’t need to do your taxes as they’re now covered in paint, or the fear that you probably should have done your taxes and now they are covered in paint. Here’s the thing: I don’t think sifting through, filing receipts and then adding them up, can ever ever be exciting. Even if someone fired each individual receipt at me, via some hi-speed cannon while I, dressed in armoured goalie gear, had to catch it, I’d still have to add it up and put it into categories which would ruin any fun. That and I’d probably get paper cut to hell so I’d be both bored and in extreme pain. Of course it has to be boring doesn’t it? I mean, everyone would just claim off everything if it was fun. If doing all your taxes meant you had to eat jelly three times a day, while going to zoo on a skateboard, I think everyone would do their taxes all the time, and the economic climate would be in trouble. That or lots of animals would have businessmen’s heads stuck in the bars of the cages after being flung from a skateboard covered in jelly.

Yesterday I managed to do all my incomings, and then two months of outgoings. What I’ve already assessed from this is that I’ve earned a decent amount more than last year (yey!) but still don’t earn anywhere near enough to buy an island, a yacht, a large bassoon or infact, really anything. Occasionally I can buy a biscuit. One day, I hope I do my taxes and realise that I now earn enough to get a whole packet of digestives without too much financial worry. Saying that, if it all goes wrong, I’ve got more than enough receipts to chew on.

Whilst doing my taxes last night, I watched the Italy vs Paraguay match. I’m not sure why. I hate football, but I hate taxes more, so it felt like I could distract myself from hating taxes by hating the football instead. Sadly it just meant I was doubly bored and angry, feeling like it was the closest I might ever get to self harming. Even though I’m not a huge footie fan, I do find I get sucked into the world cup. Not literally mind. That would really freak the winners out if when they opened the lid I popped out and said hello, undoubtedly stiff from sitting in there for four weeks. No, normally I just think that it must be the best of the best playing so the footie will be more exciting than normal. Sadly, I appear to be hugely wrong. Last night’s game was as dull as doing my taxes.

The only bit I’ve been enjoying is a) the goalie’s annoyance at the ball being ‘too round’. I fully expect all the players to complain next that the sky is too blue and that the ground is too on the floor. Idiots. And b) the vuvuvuvuvuthingies really pissing everyone off. It does sound not too dissimilar to someone kicking a crane in the face, but I think that’s what the world cup has been missing all these years. We’ve had violence and upset, its time for irritating dicks with horns. If anything, surely it will just push all the players to play harder so a game is over with quicker and there is no extra time for the parping of annoyance?

I watched Saturday’s Doctor Who last night. I didn’t hate James Corden in it. I’m really upset with myself.

I got up at 12.30 today. This is proper rubbish and goes along with my worry that now back at my parents, I am possibly regressing to be teenage ways. As long as this doesn’t continue to having to drinking alcopops and having to do essays, it should be ok. Anyway, it’s kind of fair as I didn’t get to sleep till 5am after hanging out with Nat and Tom till the early hours. Actually I say Nat and Tom, but Tom was asleep on the carpet by 2am, so his presence was more incidental. Still, this needs to not become a habit, but the problem is, I really enjoy it. I reckon I’d be a pretty good nocturnal animal. Or a vampire. Though I like garlic, and being veggie have never had a black pudding. I’ll stick to getting some sunlight where possible.

Here’s my Edinburgh poster! All designed and drawn by the excellent Susan Carey who did my poster last year and the Tea and Cake posters the two years before. Its a cartoon me, with some injokes from the show on the poster that you won’t understand till you see it. Ha. Have that. As I said, I’ll be annoyingly plugging this until you all book tickets. So hurry up. www.edfringe.com 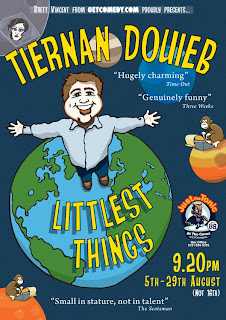 Btw if you get where the sub heading for the taxes bit is from, then you officially rock.