This is a sort of mega-blog today. Its going to be the sort of size of blog that if it were to fall on New York, there would be widespread panic as it ate buildings and crushed cars. People would be running away screaming ‘arrghh Blogzilla (or Blogjira if you prefer the Japanese version)’ as various whimsical words bounced down 5th Avenue destroying all in their path. I was meant to blog yesterday and therefore split the weekend’s adventures into two sizable, manageable chunks, but thanks to a delayed Easyjet plane and me erratically wiping 4 paragraphs because I’ve forgotten how to use a PC (Mac4Life – sheezy), it did not happen. So instead, take my virtual hand as I lead you down the bullet point path of the past two days. In no particular order:

– Yesterday morning myself and Chris Cox were strolling through the main field towards the Sunday Best tent. As we did I noticed a woman sitting on the floor with her friend. She was wearing a tutu and had her trousers round her knees as she sat there. She noticed me quizzically looking and shouted repeatedly ‘Ah’m not havin’ a wee! Ah’m not havin’ a wee!’ I kinda shrugged and shouted back ‘I’m not judging’, but she carried on saying it and then as we got just past her she shouted ‘They saw me havin’ a wee!’ Firstly, she was about 200 yards from the loos. Secondly, if you were going to alfresco whizz anywhere on the festival site, right in the middle of the main field is probably the least inconspicuous place you could have done it. Thirdly, the way she was sitting had led me to believe she wasn’t weeing, due to the odd angle of where the wee would go if she was, so it was only when she exclaimed she wasn’t, that it became a lot more obvious. I really hope she never has to hold information for MI5 or something as if all it takes is a disconcerting look from me and Chris for her to give in, she’ll be the worst spy ever. And she probably wees on her legs, and no spies should ever do that.

– I really wish there was a Winzip for real items.

– Our techy in the Comedy Tent was a bit of a legend. Standing at ‘quite tall’ or thereabouts, with boots, shorts, long hair, a cap, and a daily range of tshirts with pictures of things such as communist kittens on them, Maccy should have got on stage and had his own ten minute set. Amongst many favourite quotes he said all weekend, where his response to me telling him what the time was ‘Right, time to get fuckin’ c*nted’, and his response yesterday to me asking how Sat night was: ‘Got fucked, got laid by the Loch, got more fucked, so was all great till this bunch of c*nts decided they needed a 9 piece band on the stage. Fuck.’

– Most kudos of the weekend goes to Abandoman who saved my neck when Scott Agnew sadly had severe car issues, and they turned up and rocked an awesome 45 minute set to get us back on time with things. If you haven’t seen them before, you really should.

-Over the weekend I spotted a group of three people walking along in sloganed hoodies. The first one said ‘Rock Ness’, the second ‘Mad Ness’ and the third simply ‘C*nt’. I can’t help but feel the third guy had a bit of a hard deal.

– Chris Cox does not like the prospect of being spooned so much, that he built a barrier in our tent made of my bag and his suitcase between our sleeping bags. Better luck next time.

– I have never been to that part of Scotland before and I’m pretty pleased I now have. Quick summary, its extremely beautiful and the Rock Ness site benefited from the fact that when you looked at the main stage it had the back drop of Loch Ness and its surrounding rolling hills. Sadly, that part of Scotland is also always windy, a bit cold and rainy, which when combined with the fact you are so North it stays light till 10.35pm and gets light again at 4am, makes it a pretty surreal place. Apparently it is almost entirely dark during the winter. So a note to all the people who enjoy suspiciously creeping around, head there only over the winter or you’ll be too obvious. 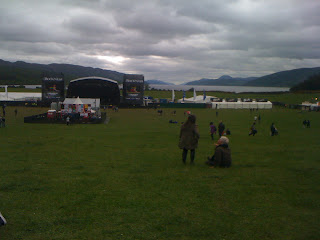 (yes yes the camera on my iPhone is shit)

– However what I like less is performing to 2000 people who were hoping I was Kevin Bridges. I am not Kevin Bridges. This was a problem to some of them. I was meant to be doing 30 minutes but ended up, thanks to odd acoustics and the fact I’m not Kevin Bridges, just doing 24 mins. Second largest amount of kudos goes to the lovely and awesome Scott Agnew who covered my under-running without complaint or worry and did 35 minutes, with a further 5 minutes when Kevin was late. Kevin then rocked the shit out of it, packing out the big tent for the first time the entire weekend.

– All the staff in the comedy tent were awesome, especially Elise, Beckie, Kieran, Lucy, Dave and Maccy, but special credit to the ace Graham who removed a drunk media person who shall remain nameless, in a swift ninja style movement that would be envied by Jack Bauer. Its a pretty hard thing to describe in type, but imagine said media type staggering in with his jacket hanging around his ankles. He struggles to step to the nearest scaffolding pole to grip to, then attempts to kick his jacket off his feet. As he just about manages to do this, Graham, from out of nowhere, appeared behind him, gently took his arms, turned him around and whisked him straight out again. I’ve never seen anyone look as confused as to where they are. Top work and funniest moment of the weekend.

– The driver that took me and Chris to Inverness train station on Sunday had driven the Strokes to the festival that morning. He probably thought at the time that he couldn’t possibly encounter more famous and talented people than that until he met me and Chris. At which point he realised he was very right the first time and things would probably now just go very downhill.

– There was a milkbar at Rock Ness. Sadly it only sold tiny bottles of semi-skimmed or flavoured milk and no milk-plus, milk plus vellocet or synthemesc or drencrom. Saying that, it still appeared that some people at the festival were ready for a bit of the old ultra-violence.

– This is what we could see from where me and Chris stood when Annie Mac was playing. Chris actually knows her so that’s why we were allowed. I don’t and therefore I didn’t get to kiss her or anything which pretty much ruined my weekend. Can’t believe how selfish she was. She is lovely and she DJ’s hella cool and did make lots of people do the jumping ups and downs. 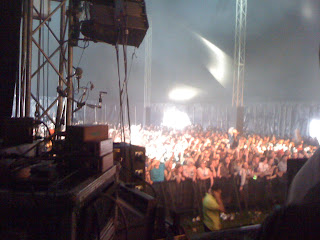 – Leftfield were pretty awesome, but appeared to have one woman who’s entire purpose was to sing for 2 seconds and then just waft about in silver lycra at the front of the stage. I cant understand how she didn’t feel embarrassed doing that. I would feel massively embarrassed if I had to stand in silver lycra and wave my limbs about at 25000 people. Saying that, Chris did point out that she looked good in silver lycra and I probably wouldn’t. Very fair point.

– Whilst watching Leftfield a man came up to us and started to tell us how his friend had had to go to hospital as earlier that day he’d turned completely blue and collapsed. He was a fairly nice bloke and we asked him if his friend was ok, and it was only after a little while that he pointed out his friend had taken ‘cider, vodka, beer, pills, speed and coke’. It suddenly became slightly more clear why this bloke’s body had given up, and just as it was sinking in, the man said, without irony ‘I think he’s a fekkin’ lightweight.’ Amazing.

– Chris has no notion of why it would be bad to take a picture of a huge Aberdeen man with a big mohican without asking him. I find this naivety incredible and after trying to dissuade him from doing so, just decided I’d pretend I didn’t know him and watch him get snapped by angry punk dude from a distance.

– I didn’t find Nessie. I think she was hiding out of fear.

– Russ Cuban is an awesome DJ.

That sort of sums it up. There’s plenty more to report but I have the exciting job today of starting my taxes. From gigging to 2000 people in a tent yesterday to sorting through receipts today. My life is a constant spiral of excitement.