You know those moments when something occurs that makes you feel really old? Often parents say its when their kids have birthdays, wondering just how time has flown by quite so quickly and where its all gone. Well today its my little comedy club’s 5th birthday which just seems completely mental to me. I mean, don’t get me wrong, it feels like its been running for years and years and its probably older than five but through its different incarnations, venue changes and various co-promoters, I can’t really remember when we started. In its current venue, The Compass (formerly The Salmon and Compass), its started 5 years and two months ago almost exactly, with several months before that at the Old Parr’s Head where it started and stayed until the alcoholic bar manager tried to fight our headliner and subsequently kicked us out. We are that rock n’ roll.

5 years (plus a bit) in the world of comedy clubs is both a long time and a not very long time. Get with my cryptic riddles say you, but I shall explain. Compared to the legendary Downstairs At The Kings Head or the Comedy Store, we are merely a sapling, existing for only a fraction of their quarter century of mirth bringing. However, when put next to all the many many small clubs that have come and gone, we’ve managed to survive for bloody ages. How have we done it? Er, I honestly don’t really know. It was originally set up by myself and American comedian Matt Devlin because we were rather sick of the crap open spot clubs and wanted to run a little den where we would have some newer acts but also a proper headliner. Our first few headliners included people we’d gigged with and pleaded with to do a gig for pittance, giving away all door profits to paying the venue then as a bar tab for everyone else, generally meaning we lost money. We started to build up a small following, which just continued to get bigger and bigger and several years later we’ve now sold out nearly every gig for the last two years. Various other things have changed too. Matt went back to the states and was replaced by Jamie Douglas, who was then replaced by my friend Georgie who just recently handed over the job to another of my friends, Rosie. Much like the Doctor’s assistants, Fat Tuesday has had a constantly changing rota of people that have put much care into it. Luckily none of them were shit like Martha.

I’m still not 100% sure why I run it. My original intention was that it would help with contacts in the comedy world and also MCing experience. Now I have both of those, and I don’t make barely and money from it, still occasionally losing money when I overbook acts, the only answer I have is that its bloody fun and I like that others enjoy it. Over the years we’ve had lots of special guests that I would never have expected to come along and play our tiny gig, including Al Murray, Frank Skinner, Stephen Merchant, and many others. While I enjoy MCing it, I think I enjoy seeing people I like in a small room. Its how comedy really should be. Tonight’s show all the dosh is for charity exactly for that reason. We are going to have a party for fun’s sake with many of the acts who enjoy playing the gig, to loads of audience who enjoy being there. Frankly I think that’s enough. And just incase it isn’t, we have cake, party hats and a pass the parcel full of crap stuff.

I wanted to do some lists of best ever moments, worst ever moments and trivia like that, but I’ll be honest, its all blurred into one big 5 year mess of memories, so if you are a FT attender, please leave some of those below in the comments section and I’ll try and mention them this eve.

Instead I found a load of pics from our first few gigs at the Old Parrs Head, so enjoy while I look at myself from that long ago and sigh at my youth:

1) Our FT Banner. Made by my during my enthusiastic graffiti days. The paint all cracked and started to smell so it had to go. 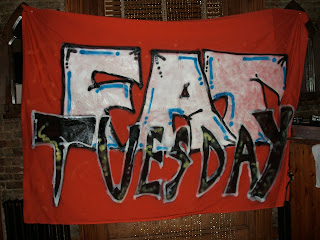 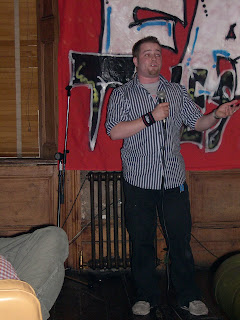 3) Isy Suttie being rather excited about being outside the house. She’s used to going outside now. How times change. 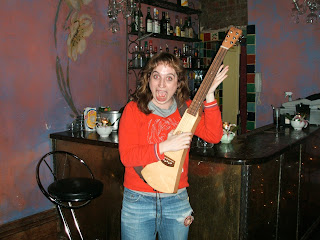 4) Russell Brand, our first ever headliner. Wonder where he is now? 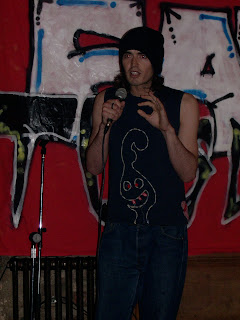 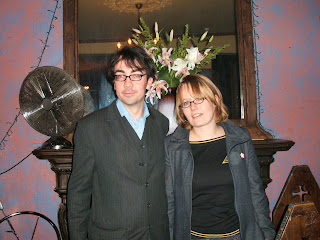 6) Our first flyer, as designed by Matt Woods. We have now opted for a more sinister looking pig. 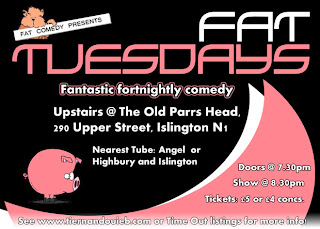 7) See? Years of comedy have corrupted him into smoking and dropping the c-bomb. Courtesy of Idil Sukan. 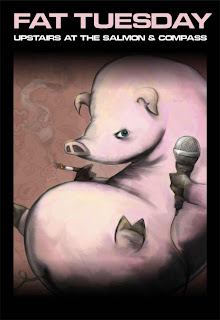 8) Finally, one of our first posters featuring Andre Vincent looking like he’s just woken up and Mark Watson as a child. 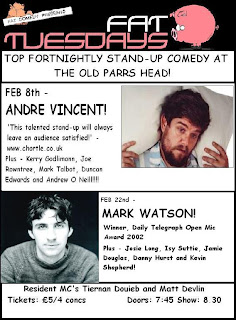 Here’s to 5 more years of silliness!

Previous How To Make The Oscars Better: A Simple Guide
Next International Day of Awesomeness