I’ll be honest, I really didn’t want to blog today. I was aiming for a cheaty non-blog, whereby I would briefly mention how brilliant last night was, how un-brilliant my hangover today is, and how anti-brilliant staring at a computer screen is for the aforementioned hangover. I shouldn’t really call it a hangover as it seems sadly very far from over, with small moments of reprieve ruined by constant quick returns of wanting to be sick. So that’s what I wanted to blog about, but then I was alerted to this:

I’m quite sad today is the day of awesomeness as yesterday was hellasuperawesome, which is a new word I’ve made by adding lots of great words together. You should try it. Other good ones frikkincoolacebrilliantuber and megachillinfunktastic. Those words are so good that spellcheck can’t even consider alternatives for them. Last night’s gig was as good as it possible could have been and better, and I can’t stress how hugely grateful I am to Robin, Matt, Kevin, Holly, Danny, Eri, Lucy, Carl, Isy and Phil for doing sets for nowt so we could have a big party and give all the dosh to charity. The crowd were the nicest possible crowd in the whole world and even endured my tiresome and rather poor pass the parcel, which I renamed ‘Pass the Farcel’ as it seemed more appropriate. Last night was so good, that I have pretty ruined any chance of today being awesome. Don’t get me wrong, there are bits that will be awesome, such as seeing Chris Cox’s show at the Pleasance tonight and refusing to get dressed till at least 6pm, but overall, I am in awesome recovery. Or awescovery.

So, with risk of being kicked to death by Chuck Norris, which I think you’ll find is a day-to-day possibility anyway as all it takes is for Chuck to kick something or someone somewhere and the repercussions will eventually involve you being kicked to death as well, I’m asking all of you to be awesome and perhaps just read an old blog of mine instead (Monday’s was particularly good). Or maybe draw a picture of a dinosaur. You’re wondering how that would work as an alternative? Well pictures of dinosaurs are generally awesome, so by me telling you to draw one, and you drawing one, we both get classed as having done awesome things. Maybe you could even draw a stegawesomeraus like the one below that appears to be eating a giant chocolate bar with broccoli? 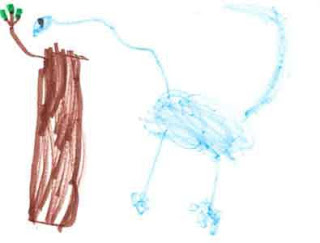 That’s it from me. I actually can’t cope with writing more. You’ll have to go and be awesome by yourselves. I’m sorry to let you down, but lets be honest, we are pretty awesome anyway. Or some of us are anyway. See what I did? See? Oh god. Bye.