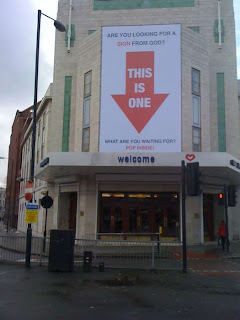 This is the current advert outside the loony church round the corner from me. Much as there is large part of me that likes to find huge holes in a fraudulent cult corporation masquerading as a religion, they do seem to dangle the bait out there like they want passers by to mock. I haven’t a lot to say about their current offering, but it must be said that signs from God have really gone downhill in the last few years. Back in the day it used to be anything from stigmata to statues of Mary crying blood. Previous to that of course were various miracles and various personal appearances from God himself for example telling Noah to build an ark. I’m not sure what’s happened but to downgrade to a level that feels like someone with simple skills on powerpoint could knock up something a bit better, does feel like God probably doesn’t care that much. I suppose a true believer would say that God doesn’t need elaborate signs with lights on and dancing bears to prove a point and we can look at that bit of definitive religious history that is Indiana Jones and the Last Crusade to see the point proven perfectly with the Holy Grail scene. But I still think he needs to do better than a step up from a primark tshirt with a similar design simply saying ‘love machine’ at the top. I fully expect the next sign to say ‘I found God and all I got was this lousy tshirt’.

Here was the last time I ranted about such things: http://tiernandouieb.blogspot.com/2009/09/god-bothered.html

I am still very very tired. This tiredness has not been helped at all by getting home near 3am and waking up this morning at 8am to co-run a Comedy 4 Kids workshop, where it was proved once again that no matter how hard I work on a joke, or how clever I may think it is, it will never be as funny as twelve 7-13 year olds chasing each other round a room to the Yakkety Sax music. Then tonight I’m doing the late show at the Brighton Komedia so I have a small gap around nowish to grab a nap and that is exactly what I’ll do to stop my brain from completely giving in to the point where I’ll walk on stage, open my mouth and only the Apple shut down noise will happen before I keel over. I’d really hope someone unplugged me too or they’d be needlessly wasting energy. So nap is what will happen. Yey for naps. Everyone loves naps. That’s why people got so upset when Napster started stealing naps over the internet all for free. Metallica particularly got upset as they are a bunch of guys who really like their naps and it all got taken to court and now Napster legally sells small amounts of sleep all across the world. I’m fairly sure that’s what happened.

There’s a lot more say, including last night’s show being unexpectedly lovely despite our dressing room being in a toilet and Tenbury Wells being further away than anything else ever, but I’m ending this blog now. I would ask you to make up the rest of it yourselves, but last time I did that only 3 of you bothered, even though I said there was a prize and everything. So this time, just do something else. Like make coleslaw. Everyone loves coleslaw. Personally, its my favourite type of law. So two final things as my eyes are doing that weird thing when you see black dots in the corners of your vision, like you’re being stalked by angry polka.

Thing 1: My twitter gag is featured in the new Guardian online @gnews140 hosted by Ariane Sherine. Have a look: http://is.gd/9eryC