More bullet points today. Sorry blog fans. I’ve been a busy bee. My entire week has been spent gathering pollen for the queen and it takes up quite a bit of time. Bees are pretty bloody busy. I often wonder if the reason why they’re dying out is due to exhaustion. If only they had the standard 25 days off a year to go and chill in a sunflower or buzz around a field for a bit, then I reckon there’d be loads more of them. The UN should definitely get involved. Anyway, some words:

Its funny but I would think a gig is never promoted well when the man running it says ‘yeah they’re often a right bunch of cunts here.’ I’m not sure about you, but phrases like that are never what I want to hear about any situation. Unless you are some sort of morbid and foul mouthed body part collector. If you are, I’m slightly worried that you read this blog. Please stop and put that leg down. Whilst the gig wasn’t at all bad in the end, it was overshadowed slightly by the man appropriately called Dick who wouldn’t stop shouting, the couple in the steamed up car outside, dogging like there was no tomorrow and most importantly, this: 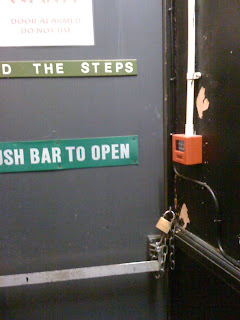 Now, lets play a small spot what’s wrong game with this picture. Have a little look. Anything? Maybe look towards the heavy padlock in the corner and then look at the sign on the door that’s being padlocked. THEY’VE ONLY GONE AND PADLOCKED THE FIRE ESCAPE! It was like some large scale Kentish wicker man. For all I knew they were going to wait till we were all finished and set fire to the entire place while chanting some rugby song. They didn’t. Instead some lovely work from Tom Rosenthal and Pat Burtscher and we all escaped relatively unscathed. By that I mean all our relatives are still fine. Oh god. I’ll stop now.

If you’re a twitterer and you’re not already following @IraqEnquiryBlog then you should do now. I wish I’d been demonstrating along with many others this morning as Tony Blair entered the enquiry, but sadly I am useless and was asleep. I know that’s not really good enough, but I am making do by watching it on all formats and tutting a lot everytime Tony Blair snakes his way out of a situation in a way that would make Voldemort gasp. There appears to be a lot of the ex-PM and all others involved getting ‘confused’ at what the UN had been telling them. Now, I am not someone who regularly reads UN briefings or law guidance but I’m fairly sure its not written in Klingon. It strikes me that people who are in these positions of power really should be able to fully understand interparlimentary laws and advice from those whose opinions matter, and yet over this last few days it hasn’t appeared to be the case. I would suggest from now on all UN codes are printed in big picture books with large lettering and drawings so those conniving bastards like Blair have absolutely no excuse to get away with killing thousands of innocent people. I really really want him to accidentally slip up and just blurt out ‘yeah I knew it was illegal but I don’t care. hahahah dead iraqis and UK soldiers! Hahahah!’ and then for him to be incarcerated for the rest of his smug grinning war mongering life. The fact that he’s now middle eastern ambassador for peace is like Tiger Woods running a chastity society.

I used to be a master of line learning. I could pick up a script and like a thespian Johnny 5 I would get through it and relay line after line like a maverick. Its a clear sign of brain deterioration, but yesterday whilst doing rehearsal, I kept completely forgetting the lines straight after reading them. Its meant to be a rough read through type event, but I’m really going to try my best to have the whole thing in my head. Then again I don’t trust the fact that I will learn the lines then on the day say them all the in the wrong order, forget my queues and generally balls it up. At least with a script I’ll say things correctly whilst just looking hugely unprepared.

The play excerpt itself and I’m particularly enjoying playing my character Graeme who gets to use such words as ‘wankquility’ and rubs a mobile phone on his face pretending its a ‘minge’. Should be much fun. If you’re around on Sunday please come along. Its an ace event and there are excerpts from 8 different new plays. If enough people turn up the Pleasance will allow the event to keep happening and may even be nice enough to put it in their brochures. Also if you’re interested in submitting a script to be performed then please do. All details are here:

And don’t forget, I will be saying ‘wankquility’.