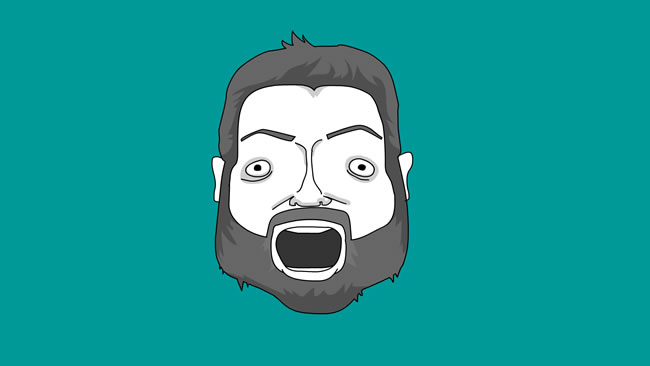 It occurred to me while tucking into some toast off the A1 near Berwick on Tweed, that I’ve been doing stand-up comedy for 14 years this year. Not sure why it hit me at that moment but it was probably a combination of me feeling relief that I was finally on my way home from my umpteenth Edinburgh Fringe, an understanding that there was nothing remotely funny about this excellent bit of toast no matter how hard I tried to think of one, and the fact that before I eating it I had been complaining about comedy to my wife who’s been putting up with me doing that ever since we met. I complain about comedy a lot despite having a deep love for it, even more than that bit of toast. What about your wife Tiernan? No I love her more. But toast and comedy are a very close almost joint second. But comedy probably drives far more of my stupid life choices, stupid life circumstances (financial, social and geographical) and stupid stopping a conversation halfway through because I’m aware if I think hard enough I’ll be able to find a joke that I can either save or tweet or say out loud and hope someone likes it. Something my wife is now used to and only very occasionally impressed with. The toast on the other hand, really not fussed.

14 years is a long time to do anything. I mean, especially make a cup of tea or have a conversation. 14 years doing the same job would, in most other areas of work, make me feel as though I was trapped. I always remember in an early desk job of mine marvelling at someone who worked there for 25 years because every year they stayed they got another day’s annual leave granted. So 25 years in, she was only in half the time and on holiday the rest. But when she was in, she loathed the job she did and gritted her teeth to get more holiday time. I couldn’t understand it, as, at only 2 months in, I already hated it and felt claustrophobic at the idea of being there any longer than I had to. But comedy is different, because it’s always different. Different rooms, different audiences, different acts you’re on with, and every so often, different jokes. It’s also not a job but a need, a problem, an ‘illness’ as it’s sometimes called between comedians knowing full well it’s not an illness. I’ve still had times where I’ve felt trapped but probably not for the same reasons as desk job did.

A few years ago whiling away my weekends at soulless club gigs I felt angry and frustrated that that seemed to be the only way to earn a decent living for someone who can never get writing or TV work. Then I realised I could just stop doing them, take the risk and try to just do the stuff I liked. It mostly worked, albeit living on a slightly tighter budget. More recently as the money has disappeared from a lot of areas I work in, I’ve felt the same frustration, watching as others do their passion projects thanks to inheritance or money that’s arrived their way through hard work I can’t do as well. There is further frustration that comes with knowing you’ve done all the steps of the fringe or certain shows or starting at the bottom with a pitch or having to persuade a producer who’s only just arrived at the job that you’re good at it because the last one didn’t leave any notes. There is a frustration at knowing how to make people find the work you’re doing and enjoy because you don’t have money to spend on advertising and PR, or that after a month of working harder than you have the rest of the year, you’ve generally come back the same as before but just with less money.

For 14 years I’ve had to find why I keep doing comedy and every year there has been something to prove I’ve got better at it. Something to say others have noticed I’ve got better at it. Something to generally stop me going ‘ah what’s the point?’ even more than the fear that I honestly wouldn’t know how to do a job interview anymore and right now my CV looks more like an advert for blank paper. (I’m fairly certain most workplaces already have blank paper and so would probably find it pointless. Or perhaps admire the gusto?) But still, every year there are those things or moments. Let alone reminding myself I’m doing the job I enjoy most, and I’m my own boss, there’s other things that have happened or are happening this year that make me know it’s worth me doing this. On top of those things, there’s also the lovely realisation of how easy I now find this job. I’m not saying that means I’m any good at it – one of my crowds at this year’s Edinburgh would definitely dispute that idea – but stepping on the stage and performing has felt easier every year since 2003. Improvising a response to an unexpected situation feels easier. Writing gags feels easier. And I have to remember that so many of the comedians I admire and look up to, have been doing this so much longer than I have and I’m still just a beginner in comparison.

And as my over tired post-Edinburgh brain insisted there was a joke about the toast I was eating, or perhaps that juice shot at the counter where the ‘shot’ looked like ‘shat’ but really, that was the extent of the joke, I realised that this is a problem. Because there wasn’t a joke to be made out of any of those things. It’s just toast. And a juice shat. But also that there is really nothing else I can do with my life. I’m stuck with this job. For at least another 14 years, frustrations and high points and all. And that’s not too shabby at all. Also I can survive on only toast as it’s a whole meal. Wholemeal. Yeah? No that’s not it either is it? Sorry.

I might start blogging again a bit after being inspired by Robin Ince’s excellent regular blogs and a need to brain vent a bit here and there. Please do check back often-ish.

My Partly Political Broadcast podcast starts again next week. Check it out here: