Nine days ago I was standing in line at the Hiroshima Memorial Park Museum, looking at the remnants of a tricycle of a small three year boy who’d been outside when the atomic bomb was dropped on August 5th at 8.15am. His father found the barely alive child clutching the handlebars and trapped under the rubble of their house. The boy died later that day. There is no specific path that visitors are directed to take at the museum, but a natural, and very quiet queue forms throughout, as everyone takes it in turns to look at the scarred remains of such a horrific bombing. Then they all read the stories by the display, and as it sinks in, everyone, in turn, wipes several tears from their eyes, aghast at what humans are capable of doing to each other.

The museum takes around an hour to visit. There is a token 50 yen entrance fee (around 27p) and then you enter a path of photos of what looks like a realisation of Dante’s work, bits of buildings where shadows had been burned onto them or metal warped, and clothes and items from people who were killed. There is information on the damage the radiation caused and the black rain, with accounts of those who suffered years and years afterwards with leukaemia. And there are accounts from those who survived, who’d witnessed family and friends dying of burns in front of them, and saw the city they knew reduced to rubble.

At the end of the museum there is a visitors book signed by powerful figures from the around the world, all of whom have written lovely messages about the museum and about how nothing like that must ever happen again. Yet so many of them are from countries with nuclear weapons, in governments that condone, and fund the creation of nuclear weapons. I left with very red eyes from sadness at how people could ever do this to each other and a feeling of such anger at the hypocrisy of those only pretend they want to deter it happening again. 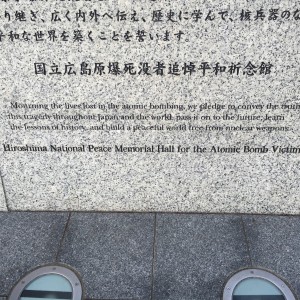 As someone said to me on Twitter earlier today, that atomic bomb potentially saved the lives of many allied soldiers, and ended a vicious and terrifying war. True. But it also killed so many innocent Japanese people and demonstrated the sort of weapon that really, 70 years later, we should have moved passed the need for. In 70 years we’ve gained technology we’d never imagined, discovered things we’d never have believed in, and in some ways progressed so far.So we must have learned from the events of August 5th, 1945?

Today the news has been filled with whether or not Jeremy Corbyn will debate the case for scrapping Trident, the UK’s nuclear weapon system. The UK has 225 thermonuclear warheads. It’s nothing compared to the 7300 the US has or the 8000 Russia have. This chart gives you an idea how much more powerful each one is than the bomb – ‘Little Boy’ – that was dropped in Hiroshima in 1945: http://uk.businessinsider.com/this-chart-shows-the-terrifying-power-of-modern-nuclear-bombs-2012-6?r=US&IR=T

We don’t need 225. The damage that one of those would do would not only destroy the target it was aimed at but the surrounding land, weather and environment of a large chunk of the earth. The instant effect would be devastating, the after effects lasting for many, many years. Cancelling Trident would save the UK £83bn at least. I’ve seen arguments today from Unite’s General Secretary Len Mccluskey who says that he will oppose it being scrapped because of all the job losses. It’d be around 10,000 overall, including the Rolls Royce plant in Derby who supply the propulsion units for the missiles. Yes, 10,000 job losses isn’t great, in an era where there’s already enough unemployment. But with £83bn spare that could be used for further job creation in renewable energy or any amount of areas that don’t immediately threaten human life. ‘We’re safer with Trident’ say those who wish to keep it. Obviously we are. How? No idea. I always assume it’s because the end of humanity would mean an end of war too, so ultimately, I suppose, the world would be safer overall.

I wanted everyone to visit the Hiroshima Museum. I wanted everyone to see and take in just what happens when these weapons are used and how fucking pointless it all really is. It made me furious that we waste so much time and money on funding destruction. Trident shouldn’t even be a discussion. It shouldn’t be something that people are afraid to speak out against. It should just be something we don’t have anymore because we should be better than a country who needs weapons incase we are threatened with weapons of similar destruction.

Outside the museum, by the A Bomb Dome, there was a demonstration against Shinzo Abe who’s trying to militarise Japan again. People lined the streets to state that they will always remain a pacifist nation. Even the country that’s witnessed the very worst, is still governed by those who don’t have humanity’s best interests at heart. Maybe we should all just fire these things at each other and make the world safer for everyone.

I’m doing my latest show ‘The World’s Full Of Idiots, Let’s Live In Space’ at the Museum Of Comedy, Holborn, London on October 1st and 2nd at 7pm: http://museumofcomedy.ticketsolve.com/shows/873540038/events

And in Manchester at the Dancehouse Theatre on October 3rd: http://deadcatcomedy.co.uk/event/comedy-doubles/

Previous How Dare They?
Next Knowing Everything About Nothing
Loading Comments...