Thing 1. I watched the X-Factor for the first time this season this morning. I don’t feel like I need to explain to you why I did it, but lets say a level of curiosity, a severe hangover and an inability to cope with the other channel showing Fearne Cotton gazing into space as though someone had asked her to think about anything ever, or Hollyoaks, meant I did. Now, I know I’m jumping on this bandwagon particularly late. I don’t like bandwagons as it is. I mean, we have cars now, no need for wagons anymore at all. Apart from their tasty wheels of course. And I’m not in a band so really don’t need that much space on my wagon should I have one. All this aside, I felt I should write about now having witnessed the appalling display that is ITV’s most popular show. While in the past I have seen people on X-Factor display a level of talent that somehow, beyond the unoriginality of belting out someone else song only without any emotion and trying not to think about how much of the planet is being destroyed everytime they turn the studio lights on, actually makes you think, ‘well its a talent contest of some sort’. I know one of the finalists from the very first series and she can really sing, dance and act and is a hugely talented person, so I bore no grudge at the time that it helped her do well. What appears to have happened since however, is that’s just become a pub karaoke night with more money. A collection of talentless freaks and weirdos that we can all just rejoice in seeing them whore their dignity live on TV with a dance display and back beat reminiscent of the worst of European television.

On today’s show, I witnessed a man who couldn’t possibly be more bland if he tried sing about bleeding in an out of tune way that made me ears almost drip with blood themselves, only for all four judges to tell him he was great. I presume this is the bad parenting thing, whereby by constantly telling him he’s good even when he’s not, the fall he receives after the show as he disappears back into obscurity to upset people as a guest spot in home county night clubs, will be devastating. Cruel and calculated. Then Don King turned up, after having appeared to have given up on the whole boxing thing. He was surprisingly nothing. He was followed by the dad from the Munsters and then a women who appeared to be made out of the plastic they discard from faulty Barbie dolls. Both did performances that I would physically go out of my way to avoid ever seeing or hearing again. Then some 12 year old boys with conjunctivitis oddly sang about having ‘bright eyes’ despite the fact a better choice would have been ‘Mixamatosis’ by Radiohead. I nearly punched the telly at this point, but it wasn’t my telly so I abstained. Lucky for you telly. Next time you choose to show me such evils I will not be so kind. I know its Halloween but you started with Theresa May on Andrew Marr’s show, then that display of absolute cock rot. No fair. Finally some offcut of Helena Bonham Carter sounded like she was in pain for a few minutes and she was told she put every emotion into her performance. My friend Mickey pointed out that nowhere did she include ‘cynicism’. The whole show concluded with Dermot, who if you look into his eyes, you can see he is actually now officially dead inside. If the whole thing had been immediately followed by the best advert I’ve ever seen about Italian food (see below: Bonus Thing), I would have given up on life.

I can only presume the meeting about this year’s show went along the lines of ‘Talent? Who needs talent? Why don’t we get some incompetent half wits and watch them struggle week on week as we revel in the schadenfreude of their failure more than an Austrian Neurologist under a parasol?’ At that point they all cheered, rubbed each other homoerotically, ritualistically took turns to vomit in a bin and then took the day off. Probably. I think they need to go all out next series and just make it like a sing-a-long night in a shit bar. I want a series of alcoholics to mumble out Neil Diamond tracks, middle age Japanese men to sing Bon Jovi with all the wrong lyrics and a girl group called ‘Hen Do’ who’s lead singer starts crying when singing ‘I will survive’ and then breaks down because ‘the bastard’ hits her when he comes home drunk. Failing this ever materialising, I’d like the show to be muted and re-dubbed in Spanish as I found it far more entertaining trying that for myself. I don’t know Spanish. This is probably why it worked so well. 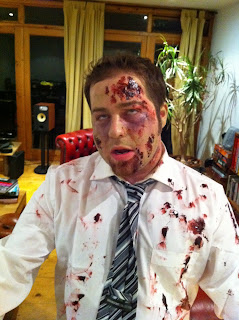 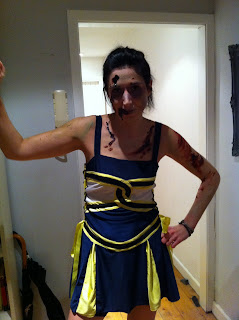 Despite an evening of solid drinking and merriment (Mickey used the sentence ‘I had to coax my puma down from the tree’ in fully acceptable context. Amazing) I still berated our running for the bus to get to the party, as zombies don’t run. I’d like to think that I deserve some acknowledgement for this.

There is currently an advert on TV for some sort of pasta thing, that hearkens back to the days of the 80s with its storyline and presentation. Its so unashamedly shit, that I’ve decided its my favourite thing on TV ever. A man knocks on a sexy Italian women’s door with a burnt pot of food and the remit that he has someone coming round for dinner so needs her help. Already we’ve hit several problems. We have the sexist notion that men can’t cook and that women have to save them from culinary disasters. Then we have the possibility that a) everyone just has a sexy Italian neighbour and b) they would be absolutely fine with you barging round and expecting them to help you out. The women happily invites him in, opens her fridge to find a pack of tortellini, which she then cooks up in a matter of seconds to produce an Italian meal. The man then serves her the food and tells the women the person he was having round for dinner was in fact, none other than her. So what he’s saying is that his way of wooing women is by turning up at their house, making them cook, then serving them their own food on their own table, claiming all the credit for a romantic meal. He is nothing but a glorified butler. She is clearly an idiot or remarkably tolerant of idiots. Amazing.