This is attempt number five on this blog already today. Why? Well there’s a whole heap of things I could tell you about from yesterday. Things like my current views on X-Factor (having seen it for the first time this season last night, I lasted 7 minutes before going on a rant about how its dumbing down society and then switched to the Bourne Ultimatum and cheered a fight scene. Sigh), or how my evening somehow ended up with me looking like this: 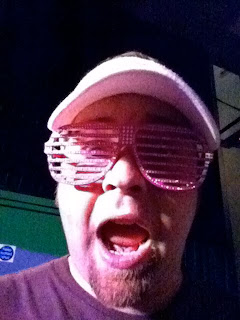 I should point out that Kanye West glasses are a whole lot harder to see through than you might expect. Its not dissimilar to pushing yourself up against venetian blinds face first. Not that I’ve done that. Much. Oh and it would be an injustice not to say that while I looked like some sort of Timmy Mallet throwback, my friend Sam looked like a Cuban drugs overlord: 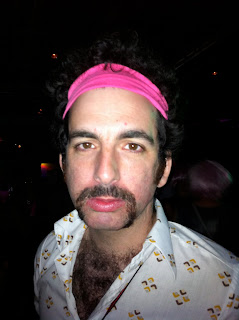 I won’t talk about that though, not enough time. Nor is there time to discuss how, despite all my drinking last night, I feel fine due to terrible Edinburgh conditioning or the fact that I ate chips in pitta sober and that clearly my living standards have dropped. No, this blog has to entirely be dedicated to the one weirdest person I’ve ever met yesterday eve. You see, I bloody love people. People are definitely the bestest. I mean, sure animals are funny, birds are alright and lizards have their moments, but when, oh when, will you ever meet one of those whose a roller girl who now works in a sexual health clinic and has vast knowledge of all the martyr saints? Show me a squirrel that has a tattoo of its favourite gravy boat on its back and I will be proved wrong.

My friend Suze cooked me dinner last night and after an awesome curry (that’s curry number 3 this week and also the third curry I haven’t paid for. If you are what you eat, I am a vulture biriyani) we headed to the birthday of a friend of hers. It was in a bar in Islington that I’ve been to before, but has distinctly become more rock than it used to be. Not a bad thing, I’m just so not very rock. Lots of big dudes with cowboy hats or trucker caps, Metallica tshirts and tattoos and lots of big chicks with cowboy hats or trucker caps, Metallica tshirts and tattoos. They all seemed ace, but I couldn’t help but feel while they rocked, I stood there in my Mr Scruff tshirt, jeans, trainers and cleanly shaven face, I merely pebbled. Suze’s friend was awesome and had, as I had been forewarned, a brilliant story about a very weird 3 month wedding and a subsequent realisation that the North/South divide was still very much evident. I won’t ruin it, as apparently it may well become a book, but lets just say my fave, yet most horrific quote was ‘and the worst thing about you getting married, wasn’t that you didn’t tell us, but that you married a girl from the North.’ Wow. Terrible times.

They were an interesting lot of journos and PR people which meant that some egos arrived in the room before the person, but mostly they seemed cool. Then I met someone who’s name I’m fairly sure was Mirror and her middle name, as we were told, was Courgette. Already, alarm bells were ringing. I have never met anyone who’s name means a household bit of furniture, with a middle name of a vegetable, but then again, I’m called Tiernan Douieb, so I have to take it all with a fistful of salt. We were then told that Mirror’s tattoos were just amazing. And they were. Not because of the artwork or special design, but more because of what they were of. I’ve seen some interesting tatts in my life, but never before have I witness a list like this. Here are the ones I can remember:

Top of the back: a hamburger with all the trimmings
The Left Foot: Fred Loves Rosie ( its representative of the serial killer couple, the West’s. Terrifying)
The Left Arm: A puppy being cradled by a girl, then the symbol from her favourite gravy boat
The Right Arm: The symbol from her favourite gravy boat again
Behind the thigh of the Left Leg: The Patron Saint of Rape Victims

There were a lot more, but I reckon that will give you a feel for why they were amazing tatts. Purely because as to how and why you would ever choose to have such things engraved on your body forever is completely beyond me. Now don’t get me wrong on the offset, she was charming, and interesting and a lot of conversation between her, Suze and myself ensued. Highlights include her explaining that she works in a sexual health clinic and when she asked what I did her response to ‘stand-up comedian’ was:

‘I bet everyone asks you to tell them a joke don’t they? God, that’d be horrible. It’d be like if someone came up to me and said “take a swab of my arse”.’

Amazing. Further points included the time she worked in a morgue and accidentally squished a dead babies eye out and had to push it back in before the mother saw the body, how she knows when her friends have STD’s, her figure and roller skating career, and her favourite Martyr Patron saints, all of which came to gruesome deaths. In amongst all this, she swore she knew Josie Long and had been to see Kate Bush with her when they were 13 (texting Josie revealed she’d never heard of her and had never seen Kate Bush live. Mad), got upset when someone told her that Fred and Rosemary West were good people – she protested they were evil, but then pointed out the tattoo on her foot. I was mostly speechless – and then she snogged a transvestite who was dressed as Amy Winhouse and insisted on buying everyone drinks.

I’m going to make a real point of talking to everyone I suspect of being beyond the norm. I think it can only reassure me that life is both interesting and that I am reasonably sane to at least a certain degree. This, coming from the man who ate chips in pitta sober last night and managed to headbutt his friend Sonia by accident, means a lot. Roll on a week of further madness.