Posted by Tiernan Douieb, 12 years ago on Saturday, September 4th, 2010

Is by far my most favourite film ever ever. Its not often I make such a rash decision so very quickly but never have I decided I liked a film so much with its very first opening 20 seconds and then not been able to find a single flaw in anything about it. I don’t wish to give anything away but as a late 20 something who grew up in the 90’s, this film manages to appeal to just about all possible geek culture from that era. Everything a kidult wants. Its hugely funny, the action is awesome and the story is just brilliant if completely zany at points. I left the cinema yesterday in such a buzz that Maaaa Blaaar (Matt Blair – we’ve been through this before) almost had to physically stop me climbing the walls. I had to run to HMV and buy the soundtrack. Then because I was all hyper I bought two other CDs as well and carried on running around Westfield shopping centre. I’m dangerous when I see films like this. After Spiderman 2 I wanted to try and climb the cinema. I should only see such films supervised. Its very lucky I’m single at the moment or whoever I was dating would find me hunting down their exs and trying to kick all of their arses. FACT. I want to be Scott Pilgrim for Christmas. Thanks. Edgar Wright, you sir, are a legend of all things. I may have to see this film at least 2-3 more times.

I have just asked on Twitter whether I should make my beard longer than it is, ie: 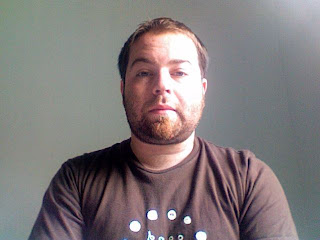 So far its 15 votes for more beard and 10 votes for small beard. I am stuck on the situation. Firstly, I have always liked my small beard and big beards itch a lot. However big beards (as discussed with Brett yesterday) can be stroked and make you look wise when doing so. Whereas small beards when stroked make you look evil. I don’t like looking evil. These are tough choices.I need to decide today because I’m going out later and tomorrow to places where I could do with either having a well trimmed beard or a small beard that isn’t surrounded by spots. Both of these require thought. If you could add your votes to the beard poll and I’ll give the results tomorrow. Its all pretty hair raising stuff. Arf. (Oh god sorry).

After promising myself I wouldn’t drink till next week, the wicked ways of Bex and Brett persuaded me to have a beer last night. I say persuaded, but they just said ‘why don’t you have a beer?’ and I said ‘ok’ without any resistance to the thought whatsoever. I need to just face facts that my inner boozer is also my outer boozer and essentially I’m just a boozer. I did only have two though and I must say after 3 days off, it tasted much like I imagine an ancient Greek siren would. It was both beautiful and yet dangerous. Admittedly, sirens would probably also taste fishy, and of human, but this did just taste of beer so I’m probably wrong. Police sirens taste of plastic. It didn’t taste of that either.

Anyway despite beer breakdown and a large helping of pasta – at a restaurant that willingly had done this in their fridge : 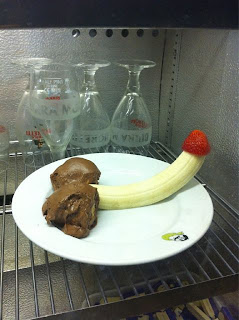 Which I find both childishly hilarious and also a terrible cry for help from very bored staff with a low sense of humour – the major craziness happened back at Bex’s when she created the Herbal Tea infusion mania. After dabbling with the oxidising hot drinks back in Edinburgh, whereby after years of scowling at such things discovered they are actually like hot water only tastier, Bex threw a whole different spanner in the works by mixing up Camomile tea bags and Green tea to make Green Camo Tea! As Peter Andre might say ‘Insania’. It was too. I can’t quite describe the hit it gives you. There’s not quite a come up. Or a come down. Or any sort of chilled feeling, or rush. No. In fact, its a lot like drinking tasty herbal tea. I’m worried I may get hooked on such things, but at the same time aim to spread this tea mixing stylee across the UK. I reckon by the end of the week I’ll be dabbling in Ginger and Lemon mixed with Forest Fruits and literally be going so crazy I’ll be sitting there just drinking it all normal like. Eventually I’ll go overboard and start putting 3, possibly even four bags into one cup until I have 6 bags in one cup and subsequently can’t pour any water in and don’t get to have a drink. Help me before it goes too far….

Hobbit
Erik The Viking
Chocobo (from Final Fantasy)
Tiernan The White (ie a tiny Gandalf)
Aslan
A Star Trek character (which one is not specified)
Flesh Gordon (no)
A Melting Wizard (???)
A Muscle Man
Lord Dark Helmet (From Space Balls)
Ewok
Jawa

All further suggestions greatly appreciated. Essentially I am letting people I’ve never met before dictate my hair growth and the way I dress. You have all become my virtual carers. Enjoy while you can until I ask you to virtually bathe and feed me and it all goes weird.

Previous iHog
Next People Are Strange