As we arrived at Kings Cross station, Tom, Nat, Eri, Danny and myself teetered off the train onto the platform laden with bags, booze sweats and a giddy mix of excitement and being more tired than most BBC3 comedy plotlines. As other passengers pushed past racing off to their various destinations, we stood still for one minute. Danny got the video recorder on his phone ready, I took out the tiny party popper we had found in our Edinburgh flat on day one, and I popped it into the air with a meek ‘bang’ as we all fumbled for words along the lines of how we had beaten the fringe 2010. The party string floated over our heads and onto the platform as though all the fun had died and then Danny told us the recording didn’t work. This, as Nat put it, felt like a metaphor for something. It probably is. We all hugged and parted ways feeling somewhat unsure of exactly whether we have won this fringe or if, in fact, it had beaten us.

Today was not easy from the word go. Not that anyone ever said ‘go’ to specifically start today. If anything, the first noises anyone made this morning where tired, pained, and somewhat still drunk groans of realisation that we still had a flat to clean and a train to catch all in but two hours, and this was not conducive with the previous night of, once again surprise surprise, 6am style going out. Still, we all persevered and final bits of packing and tidying later we all waited for the cab to arrive and take us to the station. Well all except Craine, who had left a bag of Nat’s stuff at one of the venues and had to race off last minute to get it. After a month of living with him, this barely registered with any of us and we were almost all amazed he hadn’t screwed up even more things than that and just leaving a bag without it having all his cards/keys/limbs in, mean he did quite well. At the station, we awaited escaping Edinburgh for another year, longing for home like a group of ETs. And then Edinburgh fucked us over. Up until that point I was almost certain it was Tiernan 1 – Fringe 0, but it stealth attacked us like some sort of performance based ambush.

How did the Fringe turn the odds around? By that I don’t mean rotate members of a freak show. No, I mean, how did it kick us when we were already physically and mentally down? Well in the phrase of fellow blogger, misanthrope extraordinaire and perma-frown holder Michael Legge, ‘Edinburgh said NO’. Like some scene from the Prisoner, just as we were about to escape….our train was cancelled. It was as though the fringe wasn’t done with us yet. We weren’t yet allowed to leave until it had crushed every last bit of dignity we had. Danny started spazzing out outside Cafe Nero, Nat pulled a face as though she had been told there was a court order meaning she’d only ever be able to eat cold baked beans and nothing else for the rest of her life, and Tom went to get a Burger King. I think he was just hungry. We surrounded the rail man and fired questions at him, creating plans to possibly hire a car and drive all the way home just so we could escape that instance. I was almost expecting the smoke monster from Lost or Rover the white bubble to appear and chase us back onto the Royal Mile. We decided that we’d get the next one and fight off anyone who tried to tell us otherwise. Barging onto the platform, using our bags as people movers, we disregarded all pleasantries from other comics or people we knew and fought our way onto the train and even blagged seats. Take that disorganised and poorly run East Coast rail!

We did it didn’t we? Not quite. The relief was quickly dissipated when it was discovered that nothing is ever that easy. The wi-fi on the train didn’t work, there was a baby that cried just intermittently enough that you couldn’t ever work out exactly when to snooze, and two girls sitting near me said the most inane things I’ve ever heard a human being say. I should have known when they started discussing Peter Brook’s The Empty Space out loud. I’ve read that book. I would never ever put anyone through what its about ever. I have a heart. I’m not saying its not good, I’m just saying that if you’re not a drama student who speaks repeatedly like theatre is filtering out of your anus at any one point, then no one wants to hear you speak about the concept of performance out loud with voices that unnecessarily add ‘aar’ to end of words whilst having just completed a month of being surrounded by such morons. Shut up. Unfortunately they didn’t. If anything, they became worse. The chat about Brook’s book ended quickly, which is probably because neither of them can read for very long before re-reading lines in different intonations and then pondering which was is the correct way. Instead it was replaced with such talk about skinny jeans, La Roux and how ‘he’s so hot and really cool cos he like takes drugs and that like’. Whilst I cannot agree with the sentiment or shallow nature of the statement, it was the constant use of ‘like’ without creating a simile that made me want to ram a GCSE English text book through their overly made up eyes. Then the conversation turned to how they thought each other was ‘so beautiful’ and I realised that had they just kissed each other I probably would have forgiven them. Luckily my being as deep as puddle was overshadowed by the fact they just mimed actions to Beatles songs like proper bellends instead.

The journey seemed to go on for a millenia. There were several announcements about reaching a ‘problem area’ in Peterborough, which I’m still not sure what it means but it caused a sinking feeling in my stomach. This is the feeling you get when you eat parts of a kitchen and it does sit well in your tum. See what I did there? See? Hey? Hey? Sigh. You’re all just lucky I didn’t type my joke about being worried about a ‘problem area’ having something to do with algebra. Sneaky McSneakerson. I decided that as I had very little left to lose at this point in the day, I would indeed snooze. Then the baby started again and I contemplated running along the aisles spamming everyone I could. It wouldn’t have helped things but I’d have felt better. And everyone would be spammed. Luckily the delay didn’t happen. Nothing really did. Just hours of boredom. Inane, mental inducing boredom. To the extent where myself and Craine had a pun off (he lost), I met a small dog called Martha and broke all possible petty conventional train rules by doing this: 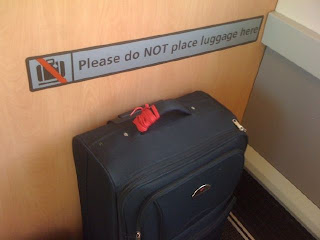 Sorry. But that is why I wonder if I have indeed beaten the fringe. Its made me a bit loony this year. I get angry at drama students, break train rules, I’ve been mostly speaking in a faux 70’s American funk pimp type accent and I keep saying ‘bellend’. This is not normal. Now back at home I’m wondering if a few days of sleep, no booze and proper food will turn me back to normal T. Or maybe the Fringe is cackling away in its lair, knowing that from now on, the Douieb has turned. This would mean he wouldn’t be looking at the computer but instead at the wall and this blog would abruptly stop. So hopefully its the former.

Edinburgh – its been another bloody joyous month. Lots of new friends, better friendships with properly lovely people, ace shows, kicking the fuck out of silent disco, tackling the fuck out of critics and drinking all of the booze. This is the first year I’ve broken the tradition of not getting myself a congratulatory bottle of whisky on departure. I like to believe that’s because there is none left in Edinburgh because I’ve already drunk it all. Roll on the new comedy season and year of actual life. Let’s hope you’re as much fun.