So far, everyday, the Meadows has never ceased to be a constant source of entertainment for me. From stick insect selling to weird violin playing tightrope walkers and people kickboxing, its been one of my simple joys of this festival, just walking through and witnessing such oddities. Yesterday was no different. Instead of a performer this time though, the joy came from four drunk men sitting on a bench. They were playing a game that entailed shouting first names at people as they walked by in the hope they would get the right name and the person would look. They were surprisingly good, getting at least two Marks, a Steve and a Helen before I approached them. I then walked past as slowly as possible and completely ruined their game. I win.

There were better examples than this yesterday but I forgot to take a picture of my favourite, as done by an anonymous flyeditor, of ‘Two Brothers, One Cup – a youtube sensation.’ Amazing. So here are my feeble attempts instead: 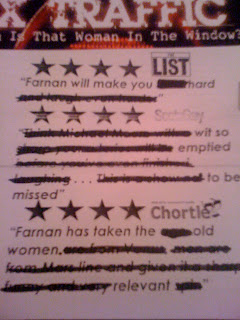 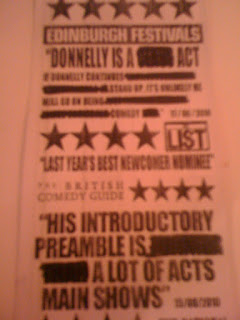 At Comedy 4 Kids yesterday, Stu Goldsmith had to deal with a 7 year old boy called Edward who insisted he was an evil robot and could only be deactivated by a certain password. After going round the audience for suggestions, it turned out the correct password was ‘farts’. Its nice to know that in the future, science and puerility will combine.

Only 5 days left. Still not dead. Fingers crossed this stays like that. Parties start tonight. There’s a high chance I won’t make it past Saturday alive.