So turns out despite my happiness about sunshine yesterday, sun is actually really bad for a couple of somethings. Skin cancer? Ok, more than a couple of things. Firstly, running. I went for one of them this morning. I say morning, I mean midday, in the very hot sun. What this meant was that within seconds my body had had all its moisture removed and I also tripped up and crumbled to dust. No one wants that. Except maybe dust mites. But I doubt there are many of those in the park. If there are then they are clearly lost. So no run in the sun, even though it rhymes. Similarly run also rhymes with bun and hun, but you shouldn’t run in either of those either. I think a clear no rhyme run message is coming through today. The other bad thing sun does is ensure that even the nicest, busiest of gigs can become very empty, as I found out at my usually lovely gig last night. Instead of the normal 150 people very up for a gig, there were 28 quite tired and starey people that made my usual fun job of comparing feel like pulling teeth. Not just any teeth either. Big big painful whale teeth that had painfully been inserted into your mouth which was an arduous process in the first place only for you then to remove them. That sort of tooth pulling pain. It didn’t help that the first man I spoke to told me he was a ‘comedy critique’ which always makes me angry, and then when I told him that was rubbish he refused to give me any more information by saying ‘I don’t want to tell you anything else.’ Has this man never read Improv by Keith Johnstone? Clearly not as that was a certifiable block. Bastard. I should have pushed one of my freaky mutant whale teeth through his head.

Anyway, even though I promised a lovely long blog today, frankly its lovely and sunny again outside and so I really can’t be arsed to sit in front of a computer. So let us take a lovely revisit to the bullet points of joy where I shall delight you in some notes from yesterday and today:

– On Friday night I parked my car at the B&B in Hereford. I parked it in a reasonably sized car park, away from all plant covering and instead just next to some other cars. Why am I telling you such tedious details? Because you need to picture the image, as when I woke up on Saturday and looked at the car, it had been royally shat on by birds. No other cars beside it had been. As stated I wasn’t under a tree or any foliage. Which leads me to believe that birds hate me. It was a targeted specific attack. I’m not sure what I’ve done to deserve this. Perhaps its because they think I’m too talon-ted. Or maybe just too cheep. Arf. Either way, next time I see a bird I’m going to kick its face off.

– I just had lunch with my Nan. Before we started eating she said, to our atheist family’s surprise, ‘Shall I say Grace?’ She then said very loudly ‘Grace!’ and then ‘That was easy’. My Nan is ace.

– Yesterday Ed Balls announced that he opposed the invasion of Iraq. Thing is, what he failed to point out, is that his comment may have made some difference had he said it 7 years ago. Now that the country has been ravaged and several thousand innocent people killed, I can’t imagine many Iraqis are sitting around today thinking ‘well thank God Ed Balls said that. That makes everything better.’ Idiot. 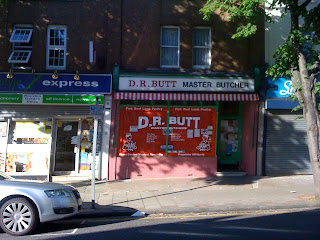 – If you removed one full stop and the word ‘butcher’ from this shop’s name, then you’d have Dr Butt Master. That is amazing. 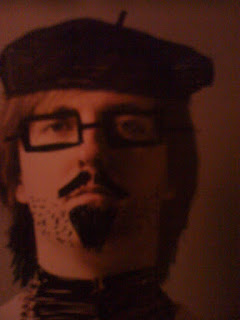 – That’s what Andrew Maxwell would look like if he became a beat poet.

– Sarah’s dog once tore its own cock off trying to jump over a barbed wire fence and failing to make it. As far as I’m concerned, this is the worst story I’ve ever heard about anything ever ever.

I’m sure there’s more to tell, but the sun is beckoning and I want some of that skin cancer everyone is talking about.

Previous Zzz Express
Next Can I Kick It?