The Coalition Agreement Explained (Sort of)

So today the government have released the Coalition programme explaining just what they aim to carry out during their time in parliament and perhaps more importantly, which bits of each other’s manifestos they have included and which have been compromised. Before I go any further, its likely you’re already bored, so here is a quick picture I drew yesterday of a bear fighting a robot: 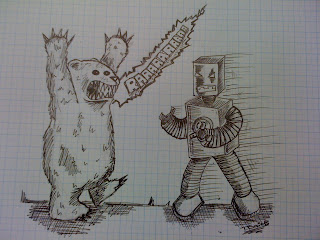 Feeling better? Ok. I feel its fairly important we know just how the UK will be meddled with in the next few years so I’ve read the Coalition programme and thought I’d highlight for you, page by page, all the bits you need to know. So let’s rock it:

All it says on this page is ‘The Coalition: Our programme for government’. Let me tell you now, its not a telly programme. This confused me for ages as I just watched it and nothing happened. Surely it should have been obvious as it was a pdf file but we are in the future and I thought maybe they were cleverer than they looked. Plus Michael Gove was clearly transformed from a puppet to a real boy by some sort of powers so who knows what else they are able to do?

This is a big box all coloured in puse. Puse makes me feel a bit nauseous. As do Cameron and Clegg. I feel like perhaps they are really channelling how the general people feel in this. Well done. Maybe they are connecting. I hope the next page has a picture of George Osbourne and a bit about how he is one of the aliens from V and then the following pages are pictures of Cameron in hunting gear taking shots at the poor while Clegg is in a apron serving him tea. Then we’ll know they can totally get what we’re thinking.

This just says ‘Freedom Fairness Responsibility’ in puse. I’m not sure what freedom fairness responsibility is. I assume it means that the Liberal Cons will be responsible about making sure freedom and human rights laws are not very fair.

This page is blank. It may well be Eric Pickles thought process. Either that or its showing that if you print it off you waste paper and that they truly don’t give a shit about the environment.

This is the contents page. Considering they all seem pretty content, its odd it doesn’t just show all the MPs faces grinning inanely.

A picture of Cameron showing Clegg a folder while Clegg stares at Cameron’s head forlornly as though he wants to stroke the hair of a real politician. Then there is more puse incase you had stopped feeling sick.

This is the forward by Cameron and Clegg. Key points to note:

‘This is a historic document’ – No its not. Its on a pdf file not parchment or something. Already with the lies.

‘Although there are differences, there is also common ground’ – segregating the commoners and the ‘different’ people already too.

‘We stood for Parliament – and for the leadership of our parties – with visions of a Britain better in every way’ – I worry about leaders that have ‘visions’. Eye problem? Or drugs issues?

‘Our government will be a much smarter one’ – This means Eric Pickles and Ken Clarke will be fired shortly.

‘you create a Big Society matched by big citizens’ – They will not tackle the obesity problem.

‘elections for your local NHS board’ – another voting system that won’t work and will ultimately leave you disappointed and without a local hospital.

Ok then it gets really boring so I’ll try and do this as quickly as possible:

BANKING – They say they will take white collar crime as seriously as other crime, which means Catholic priests are in trouble. They also aim to protect taxpayers from financial malpractice. This will probably be done by making all the malpractices legal.

Oh god. I’ve got to BUSINESS and I just feel I need to tear my eyes out through immense boredom. Quick, look at the bear/robot pic again. Phew. This is what worries me. Its probably full of terrible things that they will do, but I can’t be arsed to read it as its bloody dull and the puse really is making me feel nauseous. And that’s how they will get to do everything they want to. There is a section in business that says they will encourage the public to challenge the worst regulations, but you know that unless they make a video of those regulations starring some soap celeb who tap dances on ice while reading them out, no one is going to bother finding out what they are in order to challenge them anyway. I aim to read all of the programme by the weekend, even if I instantly turn puse afterwards and I go blind in a eye based self sacrificial attempt to save my brain. I will do that purely because I can’t complain about stuff I haven’t been properly informed in. That and surely I’ll get at least another 10 mins of material from it.

Sorry I didn’t help you through it all. Maybe try reading it in different voices or just by adding the word ‘bungle’ or ‘hirsute’ whenever you feel like it. There are ways to do it people.

Previous Norwegian Sea Life Disco
Next Everybody Loves The Sunshine