Go shawty, its my birthday, go party like its my birthday etc etc. I am now officially older, and I would like to say that it is properly different being 29 to being 28. Really different. For a start I’ve grown 3ft taller and now am able to speak in fluent Italian and Spanish, as well as having the ability to shoot flames from my arm. Ok ok, not really and once again I’m let down by my lack of gaining superpowers. One day, one day. Instead what I did get was a not very nice hangover, a scratch on my hand from one of the cats, and a jiggy tummy from the spinach borek I ate last night. I still don’t really know what a spinach borek is and I should really learn the lesson not to eat them. The problem is, it still sounds like a creature from LOTR and so I get excited and order one. Hey ho. I also got some snow which was really nice of everyone to chip in and sort that out. It goes very nicely along with all the other snow I got, and now I’m hoping someone just gets me some really icy steps to go right outside our flat so I risk breaking my neck everytime I have to use them. That would make it the bestest birthday ever ever. Oh and I got Schrodinger’s Cat. Turns out is in the box! 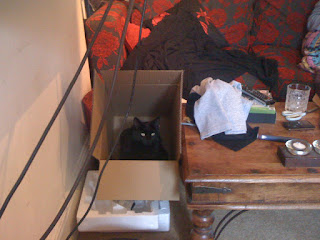 Yesterday was David Bowie’s birthday (although not really as he is from space) and Elvis’s birthday (although not any more as he is a big dead face) and Stephen Hawkins birthday too. Today however is my birthday which is better. But also I share my birthday with such famous people as Haddaway who asked ‘What Is Love?’ and we replied with ‘Dunno really’, Paolo Nutini who’s famous for having all the accents at once and Pope Gregory the XV. Whoop! Hopefully this year will be the awesomest. I thought being 28 was ace, but looking at my list of things I wanted to happen that I put HERE, I’ve only managed to do one (number 4) and I killed that off yesterday.

Last night was hella awesome though and I’m pleased to have killed off the show. Its officially dead but I feel like I haven’t properly killed it till I’ve set fire to something or buried a bit of it. I’m not sure if this is the correct way to kill a show. If you have any other suggestions, please let me know. Well, however you do it, last night was a good send off before I shoot it in its show face, with a lovely sell out crowd. I only missed one set up which I realised as I delivered the non-sensical callback at the end of the show, but other than that, well done my brain. As a reward for its memory I destroyed bits of it with booze. Good brain. Well done.

Right, I’ve got some pressies to be tinkering with, some grub to eat and later me and Layla are going to the theatre because that’s how we roll. We roll towards theatres and conveniently into the theatre seats and then stop rolling while the show is on and then when it finishes we roll home. That’s it for a blog today. Its my birthday so I’ll blog if I want to. I did want to, but not much. So now I’ll go and do a birthday and here, as my present to you on all your non-Birthdays (if it is your birthday too, you can’t read it):

Previous Some Of My Favourite Things
Next The Little Dog Barfed