I like that this spell of cold weather is being called ‘The Big Freeze’. It sounds a bit like a book by Raymond Chandler. Perhaps one where Phillip Marlowe has to solve a problem of a diamond call the ‘Snowflake’, while someone’s bank account has been frozen and its winter. There is a reason why Raymond Chandler wrote those books and not me. In fact there are lots of reasons, including the fact that I wasn’t born till 1981 when the books had been out many years, and that he was a much better crime writer than I will ever be. Its amazing just how much news they’ve managed to get out of it being colder than it has been for 20 years. The articles on the news last night and this morning tended to go: Snow!; Snowy Road Death!; Heating Problems Snow Death!; Oh Yeah btw Our PM has been backstabbed and the cabinet is falling apart!; Lookatallthepeopleplayingthesnow!; Some People In Wales Aren’t Happy About Their Sheep In the Snow!; Jonathon Ross Is Leaving the BBC!; Some pictures people have sent in of the snow!; Sports: Things are cancelled because of snow! You begin to wonder if a lot of people in the newsroom haven’t been able to make it into work because of the snow and so the few that are left have abandoned all research and just hoped they could maintain credibility by showing images of people writing #snow on Twitter. There are only so many days they can keep this up before the news will have to resort to worrying about people’s snowmen being kicked over and the warnings over yellow snow.

I can’t say I mind to be fair. The UK is definitely a happier place. People pretend they are sad about not being able to get to work, but they’re not really. Layla isn’t at school today. Is she pining to be teaching 5 year olds maths and making sure they don’t wee themselves? No. She’s cosy in her PJs watching This Morning. Hooray for snow! I bet other news doesn’t really happen in the snow. No one’s going to murder anyone in the snow are they? Too cold I’d have though. Also people wear to many layers to stab/shoot through. No one’s going to blow up any planes when its snowy are they? No, because the planes are grounded and no one’s going anywhere. Yey for snow!

In terms of the tiny bits of other news, while I am not the biggest fan of Brown, surely Hoon and Hewitt must realise that by doing this they are jeopardizing Labour’s chances of getting in even more? Way to go idiots! You’ve just made the party look even weaker than it is. People who were already toying with not voting for Labour anymore, will now see that they can’t agree with their own dynamics let alone those of the country. This will of course lead to a higher possibility of a Tory government which in turn will lead to the NHS collapsing, coal mines being re-opened just so Cameron could close them again and the rich dancing in the streets legally being allowed to kick poor people in the face and letting them shine their shoes as they do it. Lets hope it keeps snowing and and then we’ll all have to form our own tiny sub-communities as no one will be able to travel anywhere.

In terms of Jonathon Ross leaving the BBC, fair enough. I like him. I prefer him on the radio to his same-old same-old TV show interviewing, but I do like him. Saying that I don’t like him enough to be devastated that he’s leaving the Beeb. I’m not surprised that he didn’t do it ages ago due to the Sachsgate scandal, or just because after he received his first paycheque for millions and millions, he could have just left and retired forever and ever. My only fear is that this will mean his vacuous detached siamese foetus of a talentless brother Paul Ross may get more televisual opportunities. Lets not let this happen. I want to start a campaign that says if Ross isn’t on telly, then his brother can’t be either. Its like if you go to a member’s club and the person that’s signed you in leaves, then you should leave to. Same applies with the Ross’s.

I’m now going to do some work. So here for the penultimate time is a plug for tomorrow’s show. Over half the tickets have now sold and I will be there despite the snow. Even if the venue has completely frozen and everyone is in blocks of ice, I will be there, doing my show. So please come and bring your thermals and join me:

And now for your enjoyment, the story of my afternoon yesterday, in pictures: 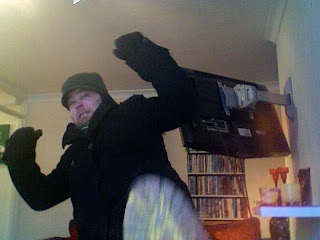 Me getting ready to tackle the snow. I’m geared up like an Arctic mo’ fo! 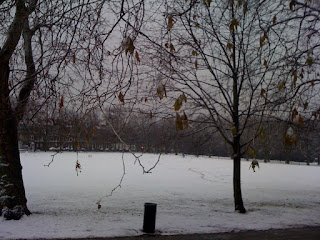 Highbury Fields in the snow. Doesn’t it look pretty? Thats only because from this distance you can’t see the frozen dog turds. 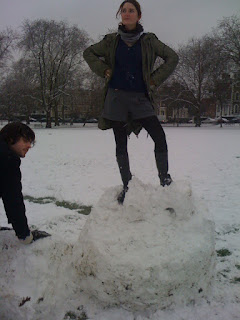 Nat gets ready to command the snow hordes, whilst Tom, in his shoes with plastic bags in them to stop his socks getting wet, rolls a bit of snow to make a snow poo. 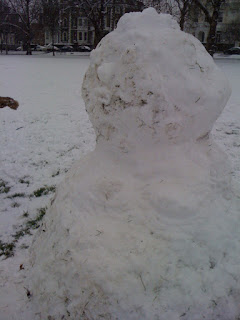 Our snow deformity! Complete with its one snow boob/snoob and snowhican! 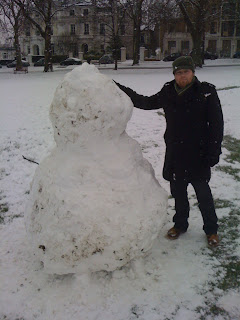 Me playing the role of tiny communist Russian. I have decided all snow deformities must be treated equally while at the same time I have wire tapped all of their snow homes incase they speak against our society. 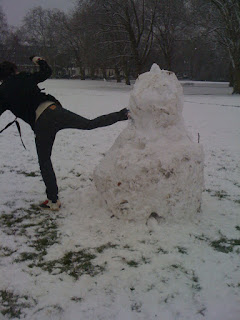 Tom kicking the snow deformity in its sort of face. If only The Snowman had ended like this. @Andrew_Taylor on Twitter asked if Tom always kicks like a horse. I said yes. Tom however, said neigh.

After these pictures, Nat had to make a phonecall and while she did me and Tom spent 5 minutes giving each other different ways to reduce Snowsan Boyle to mere snowdust. There are no pictures of the ensuing violence as I got too excited karate chopping its face.