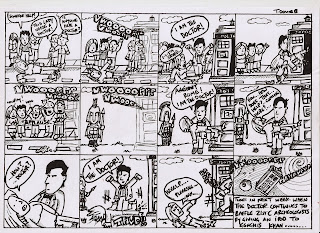 I’ve started doing loads of drawing again, which I really enjoy. Ever since I was very tiny I’ve enjoyed doing art type things. You may say a starting point was when my mum walked into the living room one day to find I’d stuck all her sanitary towels to the wall. When she gasped in shock, I merely pointed at them and said ‘collage’. I then spent a lot of the next years of my life doodling, drawing, painting and generally ruining walls, paper, carpets and other things that I would deem as domestic graffiti. Art type things had to stop when I realised that if I took Drama and Art at A Levels, I would definitely never ever earn any money in my life ever. So one had to go, and the one that went was art. But I’ve started again. Not that you can necessarily call my scribbles art, but if a urinal hanging on a wall can be called art or a messy bed or Paul Simon’s musical partner, then my drawings can too.

I’ve got loads of work to do today including doing more of these and other writingy stuff, before heading to Winchester in the snow to battle the elements and do a gig as well. Sometimes I think this is job is more akin to Ray Mears than Eddie Izzard, although only if Ray finally lost it and started doing stand-up routines to the wilderness. I would watch that. I think a lot of people would watch that. It would have to be hidden camera and we could just enjoy his descent until he’s running around snowy forests naked shouting ‘just like that’ at squirrels. I’ll get writing a proposal for Channel 4. Anyway, busy busy busy so read the comic strip and join me again tomorrow for more witterings.