Stockings for Cats? What’s that all about?

I had the most horrible dream about an epic scale zombie attack last night. Before I carry on, I’d like to point out that I am not one to witter on about dreams. I tend to have an automatic switch in my head that plays elevator music and drifts off when people engage me in a conversation that starts with ‘last night I dreamt I was a frog with no eyes and I was dancing in Peru’ or some similar lunacy. If you have those sort of dreams and you are seeking for a meaning for them, it generally means you will one day wake up as a frog with no eyes dancing in Peru. Either that or you need to stop banging your head against walls. My dream last night, whilst I’m fairly sure, and I hope it doesn’t signify a large scale zombie attack, was pretty scary. When I was doing my Edinburgh show and reading lots of zombie based literature, then I was dreaming about zombie attacks pretty often. What I’m always impressed with is that ‘dream me’ always follows the code from the Zombie Survival Guide and tends to survive while everyone else around me is bitten and turns or just dies. Last night’s dream was definitely deserving of being filmed. My favourite bit was when I spent ages getting up a flight of zombie infested stairs to reach my Nan’s house, only to then go back out again to get some shopping for her because she hadn’t been able to make it to her local supermarket. I am a caring zombie killer.

I’m not sure what spurned zombie thoughts last night as yesterday was spent going through my old material and generally realising that 6 years ago I was really really unfunny. Its not a nice realisation turning the pages of well worn notepads to find pages on pages of non-jokes about the Chapman brothers artwork, and other thoughts that are just that, thoughts. There was one bit where I had simply written ‘Stockings for cats? What’s that all about?’ I really really hope I was doing that as a self-joke knowing that in years to come it would disappoint me. If not, I would like to disown the 2003 me. He was clearly a prick. I did find a few good things including some long forgotten notes which I think I can now make into some decent gags, and some old comic strips that I will redraw and post up at some point. And there was also this: 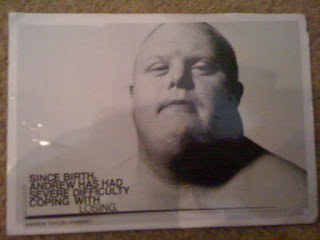 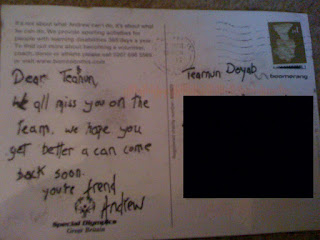 Politically correct people you can be disgusted elsewhere. This was sent to me in 2005, and made me laugh pretty hard for quite a while. I still don’t know who sent it to me, though I do have a few ideas, but either way, it was damn funny and still is. Whoever sent that was funnier in 2005 than I was in 2003.

Going on a mass ramble today with Layla, Helen Arney and several members of the comedy fraternity. I haven’t been on a ramble for many years and I’m looking forward to stomping about in some woods for a bit. I have a feeling this excitement will disappear within 10 minutes when I get cold, lost and start remembering the Blair Witch Project and my dream from last night, until I run back to the car screaming and have to sit by myself for 2 hours while everyone else finishes the walk. Yey ramble!