I’ve just finished all my Christmas shopping. It should have been finished yesterday but there was one person to buy for who was difficult. There is always one. Every year I nail all the present buying in a single shop based movement, only for one awkward individual to step up to system and catch me off guard in the world of retail purchasing. Well fuck you, difficult person. You got served. I found your pressies in a 25 minute journey to Covent Garden. On tube, off tube, buy gift, on tube, off tube, home. SLAM! Frikkin SLAM! Next year if you even try that shit you are getting nothing from me. NOTHING! So on my big tick list of Christmas things which isn’t really that big, most things are done. Presents – conquered, food shop – slammed in its stupid face. Seriously, we bought most of Sainsbury’s yesterday. Using the age old excuse of ‘well it’s Christmas isn’t it?’ I bought all the cheese, all the wine, random things that come in small pots and taste nice, and a bottle of fake Baileys. The fake Baileys is an essential for this time of year. I don’t particularly love Baileys and I constantly learn year after year, only to then forget again, that if I mix it with beer/wine/anything ever I get sick. But still, that sickness must be put aside, because no other boozy drink tastes like supping from the teet of an alcoholic cow, and what could be more festive than that?

I found two things at the supermarket that you need to know about. FACT. 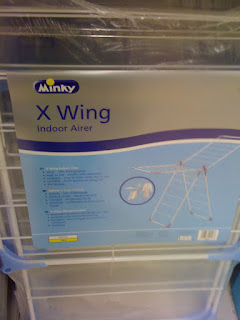 This must be the most boring piece of Star Wars memorabilia ever. 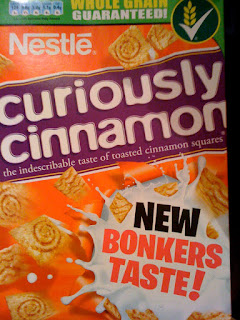 There are many things wrong with this. Firstly, anything that is meant to taste of cinnamon should not be ‘curiously’ cinnamon flavoured. It would be curious is despite all the cinnamon flavourings, general opinion was that it tasted of bacon. That would directly cause a level of curiosity from all those who indulge in its cinnamon squareness. If you are curious as to the cereals cinnamon taste I would perhaps put it to you that you are startled or bewildered by many things being as they are and I would perhaps also suggest you shouldn’t be allowed out on your own. The second very wrong thing is the notion that it has an ‘indescribable taste’, despite having already explained it is ‘curiously cinnamon’. Being hugely pernickety, I would also say that the word ‘indescribable’ is a description. I would also worry that so far the cinnamon taste is only curious and no one can really describe it, which rather puts me off eating them and is pretty poor promotion to someone like me who would like a definitely cinnamon tasting cereal. Then, just when you think they can’t take logical food definition and lay a fat one on it any further, they then use the term ‘New Bonkers Taste’. I’ll be honest, that caused me to buy them. I haven’t yet had a bowl, but if the taste is not remotely in the same ball park as ‘bonkers’, if it doesn’t hinge on the complete and utter unbelievable insanity that that tagline states, I will be writing some stern letters of rage. I am expecting full blown, all out bonkers. I want to eat it and for my mouth to spak out in all proportions and for it to taste of pink elephant turd and fairy faces. Proper bonkers. I’m waiting for a sensible time to do this just incase it is truly bonkers and I have to write off a day. If it is also, as ‘bonkers’ as they say, I will allow the comments on ‘indescribable’ (despite now also describing it as bonkers) and ‘curiously’. I will also forgive them for changing the name from Golden Grahams, a name which also used to upset me on account of them neither being golden, made of gold or have anything to do with any Grahams I knew.

Anyway enough of that. Its festive and being festive I have to spend today cleaning up. I don’t see why. Jesus was born in a barn. I bet it stank of horse shit. Our flat smelling a bit like dust and gone off food is almost a tribute. Layla disagrees with this. She also didn’t want me putting a donkey in the garden or getting three wise men to hang around outside our house for a few days. So today is cleaning day and the longer I make this blog, the more it delays me starting, so I’m very tempted to type until my fingers bleed. This will cause unfestive rows though and so instead I will merely leave you with my favourite few Christmas Cracker jokes to get you through the day. I wrote the first one last night and its made some people in Israel think I have mental health issues. So I wrote more too. Enjoy:

A cream cracker walks into a bar on Christmas Day. No one eats him. It is Christmas so no one is there. If it was any other day then someone would’ve eaten him as the human race is yet to understand the sentient nature of savoury snacks. It is not realised that everytime a cracker is eaten, in a distant galaxy where they are the top of the food chain and eat cheese on people, a small ritz cries, knowing he has lost a parent or friend. ‘Phew’ said the cracker ‘thank god for baby Jesus’. As he walked across the empty establishment, a dangerously leaning ashtray fell off a tabletop and crushed him underneath reducing him to mere fragments. Gutted.

A cracker from Texas has Christmas at his caravan. He doesn’t understand Christmas and so decides to shoot all the presents he has been given. Luckily they are all empty cans sitting on a wall and that was what he was meant to do with them. Everyone is happy and has a lovely day. Except for his brother who was putting the cans out and is now dead.

Robbie Coltrane spent Christmas day in character as the the famous criminal psychologist from the ITV series. It rather upset his family when he suspected several of them of murder, drank all the booze and then demanded to be witness to the autopsy of his nephew who was not dead.

Best gift to buy someone on Krakatoa for Christmas 1883 – A large ashtray.

Please use those wisely. And if you can’t then just shout them at strangers.

My website has some new things on it. Have a look: www.tiernandouieb.co.uk

Previous Shop Til Everyone Else Drops
Next Christmas Eve Playlist