In 2011 myself and champion comedian adventurer and conductor of supremely weird tasks Tim Fitzhigham collaborated on a children’s show for the Edinburgh Fringe. Sponsored and produced by the Pleasance, The Adventurer’s Club was the tale of bungling explorers Tim and Tiernan going off on a journey to find John Franklin.
He has been missing since 1845, when he set off to discover the North West passage and hasn’t paid his Adventurer’s Club membership fee since. The very silly hour contained slapstick humour, a polar bear, lots and lots of polystyrene snow and as many puns about the Arctic as possible. It got great reviews and delighted audiences of children and vast amounts of adults that came along just to see me and Tim prance around an inflatable igloo for an hour.

A second Adventurer’s Club show, ‘The Source Of The Nile’ was performed at the Udderbelly Southbank in 2013. This time the Adventurer’s went on a mission to follow in the footsteps of Richard Burton and John Hanning Speke and discover the famed source of the River Nile. On their way they encounter a singing crocodile, an angry gorilla and the long lost Dr Livingstone. 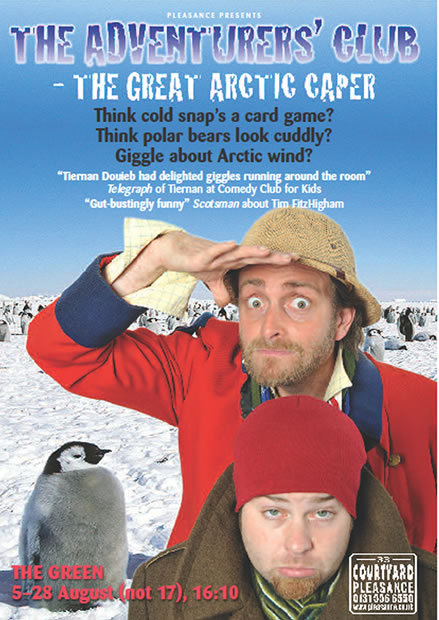 The Adventurers Club – The Great Arctic Caper
- The Scotsman

Heroic acts: Exploration on the Fringe
- The Scotsman

The Great Arctic Caper
- The Stage

Previous Everything You’ve Ever Needed To Know Ever
Next Zomedy