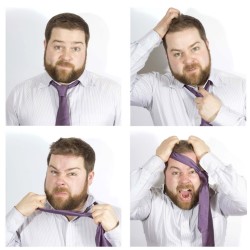 Friend of Punchline and very funny man Tiernan Douieb is set this year to perform his first Fringe show since 2011: needless to say we are very excited for it! ‘Read Something’ will be a free event and will run from 13th – 23rd August.  As Tiernan previews his show, I caught up with him to discuss his feelings on Edinburgh 2014.

Hello Tiernan Douieb, how are you?
I’m great thank you, apart from hayfever which is horrible. I don’t know who the High Pollen Count is, but when I find him, I’m going to have words.

Where will people recognise your name from?
Randomly throwing their fingers around a keyboard probably. Or trying to search for shows by Tommy Tiernan and checking page 6 of his Google search.

You are not just a stand up comedian; can you tell us more about your writing and acting?
I primarily do stand up (for adults and kids) but I try to do acting and writing work when it pops up. Last year I did a few adverts and had a lovely bit part in Channel 4’s Fresh Meat which was a lot of fun. I’ve written for a few bits of children’s TV and regularly write blogs and articles for all sorts of bits. Currently I’m working on a children’s TV show with the brilliant Tim Fitzhigham so fingers crossed that happens.

We love ‘Partly Political Broadcast’, can you tell us more about what it is and what you set out to achieve with it?
I’ve been increasingly interested and irritated by politics as I’ve got older and as a result, it’s what I spend a lot of my stand-up talking about now. I think across the UK politics is in a very interesting and often quite easy to mock place. Yet there is nothing on TV that properly satirises it. We have the same old panel shows that are lightly topical and not much more. Andy Zaltzman’s and John Oliver’s The Bugle podcast is the best thing out there, but what we actually need is a British Daily Show. So myself and Ben Hilton decided to see if we could do our own online version. We’ve made 12 episodes now and while it’s been really well received, it’s hard to keep getting views for a weekly online show, so we’re having a break and plotting where to take it next….

How excited about performing at the Edinburgh 2014 Fringe are you?
I’m really looking forward to it. I haven’t done the Fringe since 2011, apart from popping up for a few days last year, so it’s nice to know I’m coming back. I’m only doing half a run this year, and I’m already starting to wish I was there for the whole thing.

Without giving too much away, what is your show about this year?
It’s about how noisy the world is. It’s not as political as some of my material has been lately but it does focus on how a lot of people just shout out their opinions having not researched them or thought about it, and with no empathy for others. It’s also about spiders and Sigur Ros.

You have performed at the Fringe before, what have been your highlights?
Wow, that’s a hard question. There’s been so many after the years. Doing Political Animal with John Oliver and Andy Zaltzman hosting in 2011 was great, so was doing my Tom Waits impression at Karaoke Circus. There have been tons and tons of shows that were amazing too from most Kitson things to Transluner Paradise by Theatre Ad Infinitum which had me welling up for about a day afterwards. There’s always several things every year that count as highlights.

What do you expect your new Fringe highlight from 2014 will be?
Turning up halfway through full of energy when everyone else is already knackered! Hahah just kidding. Not sure yet, I’ll just wait and see when I get there.

Apart from your stand up show ‘Read Something’, will you be involved in any other shows during the Fringe?
I’m hosting Comedy Club 4 Kids (which I co-run) everyday that I’m up there. I’m not planning on doing too many other shows unless people ask me too. I wore myself out in 2011 by doing between 3-8 shows a day and I’m wary of ever doing that again. I mostly want to go see things this year if I can.

Who else do you recommend we see at this year’s Fringe?
So so many things. Mark Thomas’s new play, Chris Coltrane, Josie Long, Stuart Goldsmith, Nish Kumar, Nat Metcalfe, Tiff Stevenson, Simon Munnery, Foil, Arms & Hog, and many many more. Definitely go see at least 2-3 things you’ve never heard of and take a chance on them. You never know what brilliant things you’ll stumble on.

Tell me more about the sock puppets and foil hats…
Hahahaha someone’s been looking back through my old youtube vids and odd blogs. Foil hats are purely to defend yourself should you ever go and see Derren Brown live. It’s a necessity. He’s a mind witch. As for sock puppets. I worked on a children’s TV pilot teaching kids to express themselves using puppets, so I learned with the children how to make my own. As a result of my ever erratic brain I then spent some time creating characters like Zack De La Sock and Chris Sock because I really have too much time on my hands.