Won’t Somebody Please Think Of The Children?

By Tiernan Douieb In Medium.com, on December 5th, 2019 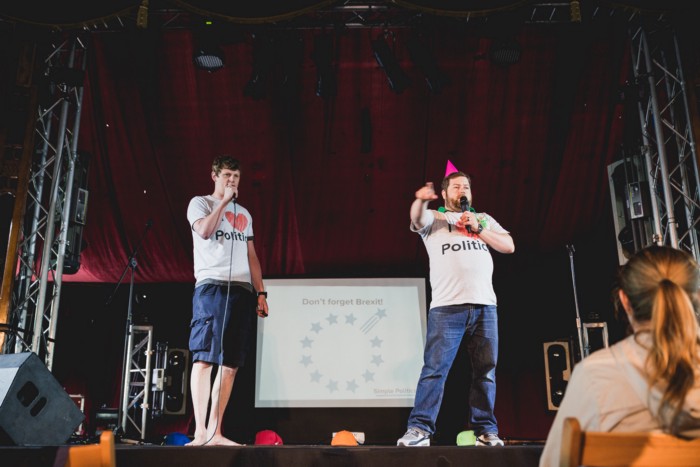 About 10 minutes into the children’s show about politics I’ve been touring for the last year and a half, ask the children to vote to either spend £100 on getting a friend of ours a wheelchair for his broken leg, or use it to buy 50 mosquito nets for countries suffering with malaria. This exercise was created by show co-writer and creator of Simple Politics, Tatton Spiller, and was set up to explain how politics is about making decisions on what money should be spent on. Our imaginary friend is given the name ‘Steve Steve’, we often say what hospital he’s in and talk about all the things he can’t get to because of his injury. While the countries with malaria are never specified. Yet 99.9% of the time, the children vote to spend the £100 on mosquito nets, because as they see it, it’s for the greater good. Steve’s leg will heal, children may die from malaria. It’s really no contest to them. When asked if they had an extra £100 would they get Steve a wheelchair too, the answer is always no, we’ll get more mosquito nets.

Obviously, we attract an audience that’s interested in the show and can afford to come along, so it’s by no means representative of the wider public. But with that and other parts of our show, as well as the childrens comedy shows I do, I’m always amazed and warmed by how fairness and equality comes top of their priorities. Well, aside from the occasional completely bonkers reply of course — ‘If I was in charge, I’d invade Finland because my brother’s called Finn’ for a prime example. But of-course they have a strong sense of moral justice. Every story they’re told is about kindness, looking out for others and telling the truth. Their nursery or school will be encouraging working together and sharing. Channels like Cbeebies are a hub of goodness where characters are always keen to explore and take delight in the world, while also being told they can achieve anything they want to. In the lead up to Christmas all they’ll be hearing from every angle is goodwill and giving and nativity stories about a refugee’s baby.

It seems to be largely ignored what effects this general election might have on children and future generations. Not just what certain policies may do to their education but also the entire toxic atmosphere that it, and the last few years of politics, have created. When gigging to far more cynical grown-ups, I’ve been doing the joke ‘I feel sorry for teachers have to tell their pupils “if you don’t stop misbehaving and lying, you’ll end up as Prime Minister’. That used to get a big laugh, but in recent weeks it seems to be causing a laugh followed by an odd sort of acknowledgement that this is where we are now. Lies are keenly accepted and displayed across all channels to be consumed more easily, notions of a better life and actually giving people things they might need are mocked as fantasy, not wanting to blow everyone up and kill people is seen as weakness. Racism, divisions and violence are not only rife but used for one-upmanship instead of uniting people to tackle it. The very idea of talking about saving the planet from very serious climate consequences isn’t even worth two leaders turning up to. Judging by the polls, most people are voting based very much on their own very short-term needs. Forget the mosquito nets, right now, we don’t even want to get Steve Steve a wheelchair because there’s more than three words in that request.

My daughter is only 20 months old so luckily, I don’t have to begin to explain why I keep shouting at the television. I don’t at all envy parents of older children, who must, at the very least, feel so hard done by having been told off for lying about stealing a biscuit or breaking a sibling’s toy, while the person in charge of the country, and likely to be in charge again, has his entire ethos based on doing just that. Oh and no one cares about them being able to breathe in the future or not wanting to have to swim all of the time. It’s more important they stay in an underfunded school where they can spend an hour sharing a pencil. How does that work? Do we all collectively just say ‘ah yeah sorry, we were lying to you’? Do we let an entire generation grow up completely disillusioned by it all? Or is the answer that maybe we re-write everything to fit with a 2019 narrative? Robin Hood must be read backwards so he takes money from deprived people and gives it to the rich. Little Red Riding Hood just believes that the wolf is her grandmother because why question anything else? People injured by false cries of wolf are called too stupid to have worked it out for themselves, and emperors call those who say they’re naked traitors while being interviewed naked. These are of course all outdated references, so in today’s world it’d be more Duggee promises badges but never gives them to any of the kids except those that can pay for them, the Twirlywoos aren’t allowed to dock their boat on shore without being shoved in a detention centre and Bing is Prime Minister, because of course he is. Do we have to change the message so they’ve got even the slightest chance of surviving in a world that’s shunned any want of things to be better?

A friend told me recently about a parent at their kid’s school who was a climate activist but refused to let her daughter go on the school climate strikes because she was coming home in tears about the world ending and it was making her immeasurably miserable. It was an eye opener to me, that no wonder we’re struggling to deal with these issues or change them when they all seem too big and too destined to do anything other than panic. It’s a real reflection of the doomsaying depressed message that we’re all spreading. It’s not ‘we must and can fix this’, it’s a hopeless, bereft ‘what’s the point’ attitude. The reason that Tatton and I wrote our show was to tell kids that politics is for everyone and can be understood. But also, that they can get involved in politics by talking to people about what they want, and yes, it’s corny, by being the change they want to see. It’s about saying, ‘take part and you’ll not feel useless and you might have an impact.’ I hope that we achieve that and motivate at least some of those that come and see it. But it’s very hard to deliver that sentiment with any sincerity when most adults seem content with not even trying. Maybe we need to learn from children a bit more and try to at least perceive the possibility of everyone living happily ever after so that we can begin to work towards it. It’s either that or Prime Minister Bing.


Filed Under: Writing
Previous Is childcare worth it when you’re freelance?
Next Love work and love life and the balance will come easily