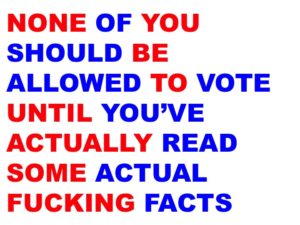 I probably should’ve posted this days ago but I have no idea how many of you read these news update things. So:

There’s been enough super long FB posts, blogs, articles etc about why people have decided they’re voting one way or another in the referendum on Thursday so you don’t need another one from me. All I ask is that before you vote, you research and double check that your reasons for voting are actually correct. There has been so much rhetoric and bare faced lying in the campaigns and it’s been so disheartening to hear people state their reasons based on complete fiction.

There are enough resources around specifically for this election – The BBC fact checker, Full Fact (which I think are brilliant), UKandEU.ac.uk etc etc – and that’s not including actual government websites and EU websites that state actual policy on them. Or you know, all of the internet that you have at your finger tips, which while that may provide a ton of digital bullshit alongside pictures of cats in Victorian costumes with laser eyes, there is also a lot of facts out there. Actual facts. Things like only 13% of the UK population being foreign born immigrants and how there is very tiny tiny non-conclusive evidence that immigration causes unemployment, whereas large amounts of evidence that it does the opposite as more people mean a higher demand for services. Or how actually, if you look up how it works, the EU isn’t as undemocratic as you might think. Or how Turkey won’t be joining the EU for many many many many many years if it all.*

Y’know, facts like that. I think there are some good reasons to vote leave but the campaign hasn’t highlighted any of them. I think there are more good reasons to stay, but again, the In campaign has ignored important parts like environmental protection or funding for the sciences. So ultimately, with the campaign politicians only vying and mentioning what they think will sway the people, or what they have interests in, you have to do the work. So please do it. I’d feel a lot happier if everything actually became a horrible dystopian nightmare even though everyone had educated themselves.

Oh and Episode 21 of Partly Political Broadcast has lots of facts in it. Mainly also nicked from those aforementioned websites.

* You can find all that on Fullfact.org, an indecently run website, researched by non-partisan academics.