A couple of weeks ago I posted this: https://www.tiernandouieb.co.uk/2016/03/partly-big-society/

A few people read it and said they liked it. Mark Thomas very kindly sent it out to his followers on Twitter too which gave it about 400 views and the podcast where I talked about it had over 1200 listens. Which is all great. And as a result of all of that, two people took part and sent me pictures. Which, let me get this clear, I’m overjoyed about. I wasn’t sure anyone was going to bother taking part in this silly idea, but two people put time and effort into sending something in the mail old school and that’s great. One of them – Daniel – even got a letter back from Councillor Roy Perry which mentions the one from Jayne. Worryingly, I think mine may be lost in the post as he didn’t seem to get it. Ho hum. Here’s the reply: 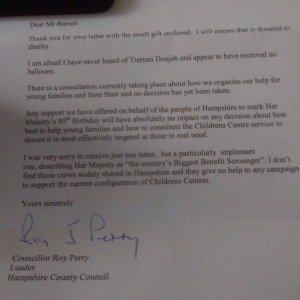 ‘Tiernan Doujeb’? Bloody hell. But great that he had to reply and great that a consultation is about to start. It would’ve been nice for them to get 100’s of submissions that’d really peeve them off and maybe help persuade a certain view point for their consultation but I can’t expect that to happen from one podcast and one blog.

The next Partly Big Society in podcast Ep 10 was just to sign this here petition: http://chn.ge/1noSZs1  And I’ve no idea if anyone did that but I hope even one or two gave it a go. Especially as it’s a tad easier to do than actually posting something like they did in the olden days. (Kids – there may be videos on youtube by historians explaining how it works).

So my question to you – the 5 people who read my blog – is, does it need to be low level effort for it to work? Was I aiming sights too high with sending stuff? Or is Partly Big Society, much like Cameron’s shitty plan that I mockingly took it from, an unattainable idea? Obviously I’m being needlessly defeatist here. I understand that my podcast is in early days, as is any attempt to do anything with it, but feedback would be helpful.

More importantly, while you can still take part – and please do – in the first two Partly Big Society attempts, are there local issues to you that we should tackle next? Please let me know. Or, sod it, not national ones? Let me know and I’ll get thinking on what to do with it. Also keen to know who else I should try and interview on the podcast and anything else that you’d like me to do with it. I’d very much like to be democratic with it all and selfishly, would love to feel like we can do something, anything to delay the inevitable horrors of several more years of this government. That’s all this year so far has been. Horrific policies and celebrities I like dying. I can’t do anything about the latter unless I raise enough money to encase Tom Waits in bubble wrap with 24 medical staff, which lets face it, won’t happen. So fingers crossed for some mini podcast activism.

The podcast can be found on iTunes at: https://itunes.apple.com/gb/podcast/partly-political-broadcast/id1075342863?mt=2