It might be just me, and the amount I’m reading and watching the news at the moment, but things feel a bit despairingly bleak right now. In terms of politics I mean, and the future of the UK and world. I’m writing this just before today’s latest probably cut filled budget is announced, homelessness has increased hugely, education is a mess, hospitals are understaffed, we’re all going to have everything we do watched by the Home Office and amongst all of this the opposition is too busy fighting themselves to oppose it properly. Meanwhile abroad there’s endless war and the possibility of either one racist bigot or another running to be in charge of the most powerful country in the West. So, as I used to end an old joke with, I wonder if I should buy a gun and some silver spray paint because I’ve seen Mad Max. I’ve added the silver spray bit for the young ‘uns. I wrote that joke way before Hardy had anything to do with that franchise. See? I’m so inclusive.

Part of the reason I started a podcast a few weeks back was, selfishly, so I could vent a bit. Comedy is a good way of screaming your thoughts and feelings about things without well, screaming. I thought I can help myself learn about what’s happening and make jokes about it and that way I won’t just explode during an episode of Question Time one week, which would be inconvenient. And it’d really ruin our living room carpet. Priorities. So far, I’ve found that just be interviewing people each week on the podcast I’m learning a lot more about issues, but at the same time, also how bleak the reality of everything is. On this week’s Partly Political Broadcast I interview a policy advisor from the Associated Teachers and Lecturers Union and by the end of it, realised just how dire the teaching crisis is. It’s made me spend the week genuinely questioning if it’s fair to have kids if they’ll just be subjected to years of tests taught by unqualified agency staff or exhausted teachers who don’t love their job anymore.

Obviously, this isn’t the way forward. Not just in the education sector I mean, but in my own mental well being and sulking around isn’t going to change anything. If I am able to change or do anything at all. Which is another problem. There’s so many things to fight against and to challenge that I don’t know where to begin. And then even if I do begin I don’t know if it’ll do anything if I do, so why waste the energy when I could be spending time trying to earn more money to save myself from this elitist tsunami?

I finally managed to get some statistics about the podcast listeners last week. It turns out it has been getting between 750-1500 listeners a week (I won’t say which episodes are doing best or it may make the guest’s egos swell too much). Which isn’t bad at all and I really hope it continues to grow. Most importantly, that’s a decent amount of people to actually protest something if they were willing too. Even if a quarter of that was up for shouting about something together that might be heard a bit more than just me doing it. So, taking a leaf out of many of my favourite political comedian’s books, I decided to add a section where we can do some mini-activism hopefully in a very fun way.

It’s called Partly Big Society and the first one of these, this week in episode 9, is helping the Catherine Ovenden and the SOCC Hampshire challenge the cutting of all their Sure Start centres. The government are, like in many areas around the UK, closing many of these places that provide services to children and families. Meanwhile, they are spending £30k on a street party for the Queen’s 90th birthday. So I thought, why don’t we all send Hampshire County Council some crappy party ware encouraging them to save dosh on old Lizzie and instead spend it where it’s needed? While it might not reverse any decisions it may make a few people think or at least really piss off a couple of Tory councillors. I sent these plates and balloons: 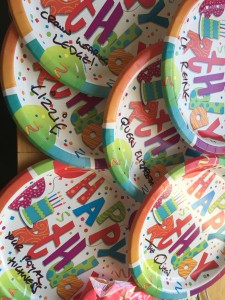 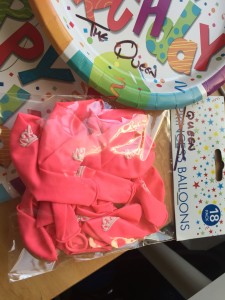 Note that they were ‘princess balloons’ but I crossed that out and put ‘Queen’. They have crowns on. I don’t think anyone will notice. And here is the letter I sent with it. The MP Julian Lewis doesn’t have email so hence the first bit: 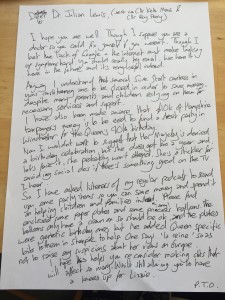 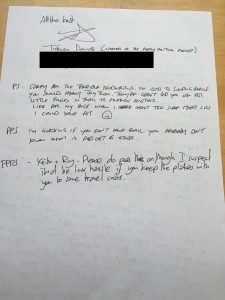 And I popped all that in a large A4 yesterday and sent it to Hampshire County Council, The Castle, Winchester SO23 8UJ. I’ve asked that people that listen to the podcast do the same and send all pictures to the @parpolbro Twitter account, the parpolbro FB page or partlypoliticalbroadcast@gmail.com with the hashtag #partlybigsociety. It’d be really nice to think that in the next week or so they receive a ton of poundshop party poppers and Spider-man plates ‘for the Queen’.

My hope is also that each week people will send me their local causes and we can try and do something small, fun, but hopefully effective about them. It may not work, but something about trying feels really good. And who knows, if the podcast audience grows, then maybe the #partlybigsociety will grow too. Otherwise, anyone know the best place to buy silver spray paint?

You can subscribe and listen to Partly Political Broadcast on iTunes here: https://itunes.apple.com/gb/podcast/partly-political-broadcast/id1075342863?mt=2#episodeGuid=https%3A%2F%2Fwww.tiernandouieb.co.uk%2F%3Fpost_type%3Dpodcast%26p%3D4269

Or on non-iTunes here: www.tiernandouieb.co.uk/podcast

UPDATE! Just had a Facebook message and a nice man called Daniel Barratt is sending this excellent letter and some candles. It begins! 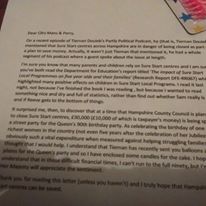 ANOTHER UPDATE: And this one from @jaynemortimer 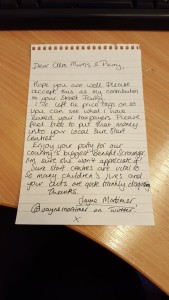 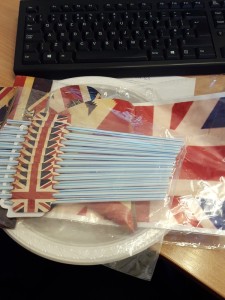