Posted by Tiernan Douieb, 7 years ago on Saturday, January 3rd, 2015

I didn't think Prince Andrew's life could get any more scandalous after all those reports that the Duke of York had 10,000 men.

It’s not great. It’s definitely not the best tweet I’ve ever done in my own narcissistic opinion. It’s probably quite obvious and could be thought up by most people. For some reason it wasn’t and for some reason, timing or otherwise, it did well and started to get quite a few RT’s. I left it at that and got on with my ever exciting day* and slightly unenjoyable kale crisps. A few hours later another tweeter included me in their reply to a company Twitter account asking why they’d stolen my tweet. It became quickly clear that this account had not only copied and pasted my joke but had done it with many others and without credit. This was irritating on a number of counts.

Firstly, jokes aren’t easy to write. Anyone that assumes they are is either an annoying genius (there are a few of those on the comedy circuit) or is delusional as to how good their jokes are. I’m not saying I sit and struggle and gripe over each one I write, but I am saying that most comedians I know work for years to get good at what they do. Years to hone how to write in their voice, how to get speedy punchlines and perform them correctly, how to make jokes that others aren’t already making. It is then the comedian’s career to tell these jokes. That’s how, as obvious as it sounds, we make a living. Occasionally comedians come up with the same jokes as other comedians. This does happen with similar subject matters being in the news or our lives and so similar ideas happen. Throughout my 11 year career I’ve come up with gags that I’ve then heard Milton Jones or Mark Watson do a variation of onstage and in a much better way and so I’ve just killed mine. There tends to be a rule on the circuit that if you hear another act genuinely doing someone else’s material, you tell them to stop it. It’s a nice self regulating system.

Twitter is of course somewhat of a grey area here. I don’t often use jokes I’ve put on Twitter in my live shows. Sometimes I do though and sometimes I put a further extended version of that jokes as a longer piece. So if it seems as though someone else has written that joke i.e. by directly copying it and posting it as their own, I deem it useless to use for my own work, therefore wasting my time entirely.

Secondly, what makes this more annoying than just joke stealing (which is hugely annoying) is that they have a lot more followers than me and are an official media company so they would easily get more credit and views for the joke than I would. As an official business it shouldn’t be your policy to steal others work. In most areas of life that would be illegal plagiarism or breaching of copyright. I read an article about Johann Hari the other day who lost all journalism work for four years after claiming quotes he took from other works were his own. Why is this different for jokes?

I’m not remotely au fait with copyright law – or any law in fact except Coles and maybe Jude – but it seems that EU laws, depending on the tweet say that the person who wrote it has immediate copyright over it. This link was sent to me via @technollama http://www.legalweek.com/legal-week/blog-post/2322163/are-tweets-protected-by-copyright … There’s not a lot online about it over all and it’s very dependant on the content of said post.

So I sent the company a fairly civil email: 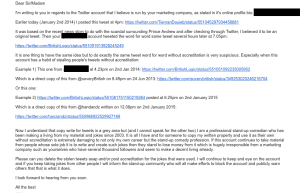 And I tweeted a picture of the letter with the accounts @’d in.

Which I received this mostly civil response to:

It’s civil in that it apologises and while it claims that they too are victims of such things (which should surely make them want to do it to others less?) generally seems to be understanding. I have been sent responses they’ve sent to others who’ve accused them of tweet stealing, and they’ve been far less polite and quite strong on how there is no law against it. I can only assume that it helped that some very well known comedians RT’d my tweet and it started to pick up attention. They also deleted the tweets which was appreciated but on the other hand they’ve removed all contact details from the Twitter account in question which is a bit dodgy. So I sent them this:

Which I felt was polite but also pointed out the link I posted in this blog earlier and just how horrible it is when people steal things that are yours. I also wished them a happy new year because really I just want to be loved. In response I got this:

They then RT’d my joke and asked on Twitter if I’d remove the tweet accusing with my original email on. I have done. Though I’ve also kept a copy on my computer and will happily send it on to anyone who’d like it. I’ve blanked their name out in this email but again, if they continue to steal tweets I’ll very quickly post this whole exchange without any redactions. I felt happy with the conclusion but sadly they aren’t the only people that have done this and it’d be very useful if the copyright laws on tweets were more clearly stated. I can see why some comedians I know choose not to bother posting jokes but for someone like myself, it’s often the best way I can then sell tickets to my live shows or promote what I’m doing. So for me to post something I’ve thought about and then have it copied feels directly harmful. I hope Twitter starts to self regulate like this more often.

After their account RT’d it, someone told me that my joke was an old one. I argued as I was sure that the news story had only come out the day before and I had briefly searched for my joke on Twitter before posting it. They told me I was wrong and being used to unnecessary accusations on Twitter*** I asked them to send me a link. They sent me this:

So turns out my joke wasn’t original in the first place anyway. I blame the kale crisps. Bah.

** Yes I spelt copyright wrong. I will hate myself about it for around a million years.

*** My favourite being that I am a ‘left wing commie asshole just like Hitler’ from an NRA member.