Posted by Tiernan Douieb, 12 years ago on Wednesday, November 3rd, 2010

Didn’t think I’d get a chance to blog today but it turns out there is wifi in the flat I’m staying in so my notions of avoiding the internet for a few days have been sharply put to rest. I won’t say its a good thing as part of me needs a few days of not tweeting every moment of every day, checking every two mins to see if anyones ‘likes’ the shit I say on FB or hammering out 300 words on my goings on. It would be a useful break for several reasons. Firstly you all would get a momentary rest from my endless internet violation, but also, one day, when I look back on 2010 and can easily categorise every day with this online diary, it’d be nice to have a small gap where I can actually challenge my memory into working. Otherwise I fear that by 2022 when all seconds of my life are on some cctv camera somewhere, my need for road directions has been rendered void by phone maps and satnavs, my phone is remembering all my numbers, calculators do all the simple mathematics, photos destroy the need for visual memories and even saved passwords on my laptop mean I don’t need to store those, it will be the only way to save myself from becoming a human goldfish. I suppose my gigs might become interesting with me constantly repeating the same observation over and over again, starting with laughter at the first time I mention my hilarious quip on how different robot cats and electric dogs are, then quiet as I repeat exactly the same words 4 maybe 5 times over. Then hilarity again as I hit the 60th or 70th repetition ad infinitum till I day. If nothing else, they will respect my unknowing persistence with a failing gag. 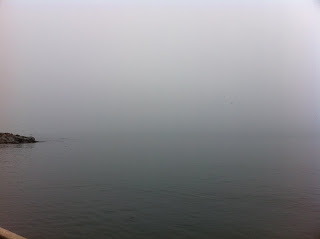 The Fog. Yep, you can’t see much. Neither could I.

That wasn’t what this blog was meant to be about. No. I wanted to let you know that I’ve just been attacked by pigeons. Myself and Simon Munnery went for a lovely stroll along the Galway promenade. We watched the fog slowly make the distance disappear and we stumbled across Mutton Island to the point where only authorised access is allowed. With no clue of what actually happens in this place, we assumed that due to the large gates surrounding what appears to be a country house facade and the other side bleak industrial mayhem, that its some sort of front for SPECTRE. All very exciting I think you’ll agree. Then we tried, under Mr Kevin Healy’s recommendation, to feed the swans some tasty soda bread. The swans all very gallant – despite hearing an amazing story today about a certain comic punching one in the face in self defence – were rather reasonable about this. The pigeons, one crow and several swallows however were not and in a scene reminiscent from Hitchcock’s The Birds I found myself actually surrounded by avian scavengers. 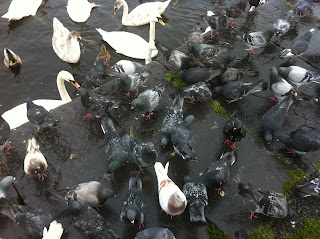 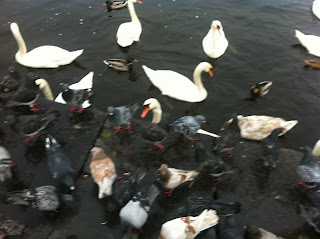 Them swarming round my feet. Doesn’t look as impressive as it was but bear in mind I kept having to swot pigeons away from my face while taking this.

I know some people are bothered by the flappy winged beakers but I’ve never found myself remotely scared by birds of any sort. Often I’ve thought were I in a situation like the one in the aforementioned film, I’d probably just kick some of their faces off. But then, when surrounded by them, I panicked. Pigeons were flying up and landing on my hands trying to peck at the bread. One flew at my face and I literally twatted one out of the sky. I threw the rest of the bread so aggressively at a swan that were it aimed right he’d have gone blind and I pegged it towards Simon who was busy waving his hands at several other in flight marauders. Now, for ever more, I am a teeny bit scared of birds. I mean, I hit that pigeon good, but if they all ganged up on me, they could totally have squawked me to death. And all for a bit of bread. Times in birdland must be hard. Maybe we all need to eliminate this threat now before they demand bread from everyone in such a violent manner? I say we rally troops and attack Turkey, the only possible HQ.

In other brief news:

– At the airport today my bag got held at security. I cockily remarked ‘Oh I suppose that’ll be my diabetic bloodtesting kit won’t it? Security shook his head and said no. I then quipped that perhaps it was my diabetic insulin or pump equipment bits. Again he said no. All confused, I asked why he’d held it back and he pointed out the large bottle of water I’d completely forgotten to remove. What a dick.

– We may now not have a flat. Bloody hate the presumptions that comics can’t pay bills. Just because they are right doesn’t mean its fair. Boo and indeed hiss.

Previous Not A Musical Expedition
Next Galway Round 2