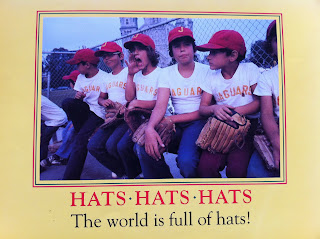 Motivation. That’s what I need today. I’m not being a slob or anything, I am just merely doing everything but the writing I should be doing. So far procrastination has led me to tidy up my room, eat a bigger breakfast than I felt like purely as it would take longer to make, pay bills that aren’t due for months and now, I’ve resorted to sniggering at a book called ‘ Hats Hats Hats’ that my brother got me as a joke some years ago. It is brilliant though and contains several images of disgruntled kids wearing ridiculous hats: 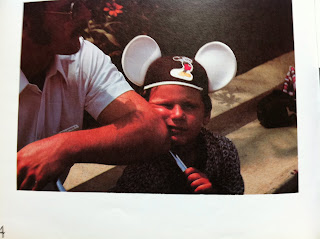 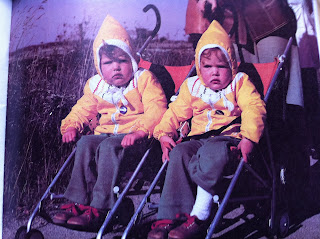 I’m not sure why I find this book entertaining. Its much akin to a tiny torn out Donald Duck hand holding a peanut that I once out into a small plastic golden frame to give to my brother as a present, that when looked upon would send us both into hysterics. I still don’t really know why, but thinking about it is making me smirk. Hee hee Donald holding a peanut. Hee hee hee. The hats book has a similar effect though I think part of it id definitely down to oddness of some of the images. There is a masochistic element to the fact that some parent somewhere has stuck his or her kids in yellow hoods or elbowed them in the face while wearing a Mickey Mouse hat, that makes me laugh. A lot.

This one looks as though a little girl is being eaten alive by a robot while a fat pervy man watches and laughs: 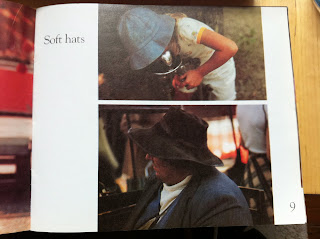 I think the other reason I like it so much is because I bloody love hats. I mean, how good are hats? They sit on your head, so you don’t have to carry them or anything. They disguise your head should someone be on the look out for it. They protect it from rain or bird poo. Sometimes you can do tricks with them. Hat tricks. And er, when you lay one down that place automatically, by law, becomes your home. It is impossible not to try on at least a few hats if you’re in a hat shop. Even if you really don’t want a hat. Hats are great. I have several hats, but don’t wear a lot of them. I wish I did, but some seem inappropriate for today’s fashion. For example, the stetson I bought in the Rocky Mountains, can’t really be worn outside of fancy dress parties or when I play Red Dead Redemption at home by myself. My trilby I would wear more often but I find it takes a certain level of confidence I rarely have to pull it off. My viking hat would scare people and my bowler hat is too big and falls over my eyes meaning I constantly walk into things. My favourite hat is my peaked beanie which is both a beanie and a cap which makes it a double hat. Its stupid warm and whenever I wear it I like to pretend I’m in New York during the snow.

Losing a hat is a sad time and over the years I’ve lost some pretty great ones. The best cap I’ve ever had disappeared at the first Edinburgh festival I ever went to. It was from the breakin’ clothing label ‘Tribal’ and had that sprawled across the front in red and white graffitti on a black cap. It was, quite easily, the coolest cap ever made by anyone ever. Then I got drunk and left it somewhere amongst the mess of the fringe festival never for it to be seen again. Truly sad times, and not entirely dissimilar to the scarring event of losing my favourite red cap when I was six. I say lose, but it became caught on part of the school fence as I raced past pretending to be Batman, snagging and tearing the entire thing in two. I cried so hard my face resembled the headgear’s bright crimson colour.

Hats are bloody great. Sometimes I wish I could wear more than one hat at a time. I’ve tried but your head gets pretty hot. Also sometimes its difficult to balance them depending on which hat you’ve put on first. TIP: Never put a stetson or a top hat on first. 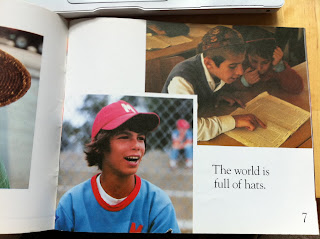 That kid on the bottom pick looks like a dick.

So yeah. Motivation. That’s what I wanted to look for. Maybe I need to put on my thinking cap till I’m brimming with ideas. Hahaha more hats. Hahahaha.

SOME OTHER QUICK THINGS:

LONDON COMEDY IMPROV returns next week. I be doing it again along with the superb talents of Brendan Dempsey, Michael Legge, Tara Flynn, John Voce and Kirsty Newton. Please do come, it’ll be brilliant. All details here:

FAT TUESDAY only has a few tickets left for next week with MILTON JONES and DAN ANTOPOLSKI. It’ll be pretty damn smashin’. Tickets here:

LASTLY, my friend Wilz has written another excellent blog about the political situation in Uganda. Highly recommend checking it out: