A quick itty bitty blog today, partly because I bloody love the words itty and bitty together, especially as itty is not in anyway a word and it messes up the spellcheck. Take that conventional Oxford Dictionary agreed English! Slam! The other main reason is I’ve got a busy day filled with sorting out things and flathunting. That’s right, flathunting. I can type it again if you like. Oh you don’t like? Well deal with this fools: flathunting. Oh no I didn’t! Oh yes I did. Yep, myself and the Maaa Blaaa are getting a huge gun and the biggest net we can find and gonna hunt them motherfrikkin’ flats down. I aim to have at least 6 flat heads up on mounts on my wall by the end of the day. Oh sure, the conservationists say, ‘you shouldn’t hunt flats just for fun. There’s so few at the moment that they’re hard to find, you can’t just take down any you fancy or they’ll be extinct.’ Well fancy Dan, I say to you the lack of flats is not my fault, but merely that of a vicious sandwich of credit crunch and the current influx of students looking for new places right now and yeah, bite down on that. Its not tasty is it? Put some sauce in it? Still a bit chewy? Well that’s why we’re taking the proverbial building based bull by its cement laden horns and gonna go find somewhere before I’m destined to live at my parents for ever and have haunting nightmares of TLC singing ‘No Scrubs’ at me repeatedly. So while I man up and get all the vocab right so I can deal with estate agents saying things like ‘well sure you can only fit one leg in this bedroom but its spacious for what you’ll find in this area’, and ‘maybe it doesn’t have a toilet but the skirting boards are the original Victorian design’, here’s a couple of quick things for you:

Yesterday, whilst in a mutually hungover chat, my friend Louis told me that on Saturday night he had played ‘Cheese Jenga’. I feel this is all fairly self expanatory, but I bring it to your attention that it amazes me that this hasn’t been thought of before. The game in question was played using a variety of different cheeses including blue and camembert. I stated that perhaps it would be best with many mini-cheddar sticks from the super market as they are already in Jenga block form. However, it was pointed out by Louis that you try to remove a cheese slice from under a large block of edam, and you’ll see how challenging it is. Fair point. I think we should all play this game. Its far more mature than you might think. Arf.

I decided to mess up Sunday by going to buy a computer game. Yeah Sunday, you didn’t see that shit coming did you? I jumped in the car, wallet in hand, and raced to Angel GAME to purchase something that would keep me indoors for several hours. Inside game an extremely fat 10 year old was running around by himself in a black tracksuit and a pair of crocs. He insisted on annoying the people behind the till by asking them for an empty games case despite their constant responses of ‘we don’t sell empty games cases’. The combination of his need for attention and stupidity meant he would wander round the shop, speaking to everyone and calling them ‘boss’ before returning to ask the people at the counter for an empty games case again. I felt both pity for him, irritation at his existence and yet some respect for the fact that by calling everyone boss, he already knew his status in the world was to work under everyone else. He will never be in charge of anything. He barged past me in the queue and said ‘sorry boss’, and I grunted at him and just pushed back past him. Idiot. I then went to pay for my game, my card was declined and it was like Sunday karma had hit me in the face. The fat kid pushed back past me and did not call me ‘boss’ this time. Its fair to say he had won. He bought a game, without its case, said goodbye to everyone behind the till, all of whom ignored him and I strolled out trying to work out how I had become less cool than that.

I’ve plugged it on here before but my friend Wilz in Uganda is occasionally writing a blog. Today’s entry is very sad but excellently written. Do read:

I’ve started saying ‘wordistan’ as a greeting. Its like saying ‘Kurdistan’ only with ‘word’ in it. Im finding myself on a fine line as to whether it could be deemed cool vocab or if, once again, its the sort of thing a fat kid would stop calling me boss for. Please try it and let me know your results.

Between starting this blog and finishing it, I’ve already been to see a flat. In fact its the only flat we’re booked into see all day. So much for the hunt. Still, amongst other things it brought me this image. Placed in the kitchen, masking taped to the wall, was this shoddy hand drawn picture of a clock. Have the current occupants fallen on really hard times? (yes pun intended. And delivered) Maybe its their attempt to stop the future from occurring? Maybe they just have a really stupid housemate who constantly thinks its 9.50 all the time? Who knows? More importantly, who cares? Even more importantly, isn’t it weird I can roam around someone else’s house and take pictures? Yes. Yes it is. 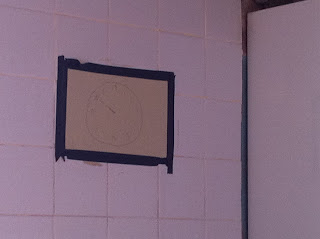 Previous Days Of Future Past
Next An Education