The fringe is all ok now. Officially. I think Sunday needed to be bad so that we could enter the true spirit of going completely batshit crazy at being here for a whole month. It always happens at some point. Sometimes in week one, sometimes in week two, but whenever it does, its guaranteed that a moment will occur when you realise you are not getting home till September so you may as well lose your marbles and enjoy it. The first major cracks occured yesterday as I walked from my flat through the Meadows in the pouring rain without suitable rain attire. Water dripping off my face, my iPod ran out of battery and so I just started to loudly sing Radiohead songs to myself, and chuckle at the prospect of doing so. Then I walked past Tim Key, and he quizzically looked at me, singing and soaking and asked if I was ok. It was only at that point I realised what I was doing, that I was clearly still drunk and that despite all of this, I was indeed just fine. Broken. Get the white coats, the fringe madness has begun.

The usual signifier of fringe madness is when myself and Keith Farnan sit in the Cow Cafe for hours driving everyone else insane by talking nonsense. Last year this occurred for hours and days on end until we culminated with a special free show in the cafe on the last day called ‘Darnan and Fouieb at the Cafe’ where talked the same shit, but drunk and on a stage and people stared. People stared because it was properly just weird. Not funny. Weird. It was our public outlet for the verbal diaorehhea we spurt outside of our gigs. Yesterday was the first day this has happened this fringe. The official loony noise of Farnan and Douieb this year is this one:

Irritating as hell. For everyone else. Me and Keith love it. If you are in any way vulnerable during the Fringe please avoid the Cafe from about 2pm in the afternoon every single day. I also discovered that by imitating a poor Irish accent and saying ‘diddly diddly’ a lot, I can make Keith want to punch me. Score.

As Charlie Evans was leaving the bar last night, he dropped a bombshell on everyone and then pissed off. Its not fair to do what he did and he knows it, which is why I’ve decided he’s a particularly conniving bastard. He got up, said cheerio and then said to us, ‘how do you spell cash?’ Now, I’ve spelt it as ‘cash’ there, but the word I mean is the short word for casual. He then disappeared and left a slightly drunk table full of despair. Certain ideas of ‘cazh’, ‘kash’, ‘caszch’ and various other versions appeared and Evans slightly rocked everyone’s vocab word in a minute. Wanker.

This morning I told Luke about this and he just said completely care-free, ‘its casz’. He wasn’t at all flustered. I worry that I was less sober than I thought last night. Sigh.

Paul Byrne does not wind in his eyes (actual wind not gaseous emissions. Though I doubt he likes those in his eyes either), yet he is still adamant eye licking is ok. I feel this is hugely wrong.

Yesterday Tim Fitzhigham asked me, out of the blue, how much I weigh. Unnervingly unphased by this I told him. Somehow this now means he has decided he can cart me up Arthur’s Seat in a child’s trailer wagon as one of his many loony tasks. I have said yes because I’d had a beer. I will keep you posted, but this could all go so horribly wrong. I really must stop saying ‘yes’.

The BBC Radio Scotland first aid chart is the most boring of all of them. (As noted by Luke Benson. And no, I’m not giving you anymore clues what this means. Read the picture and be observant. There. You got told.) 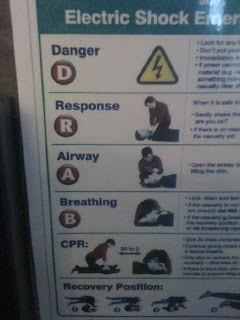 Last night’s audience get four stars. Very good applause at the beginning and strong laughs throughout. Also benefitted from a lovely couple telling me at the end that they saw me last year. Bonus points. Sadly one star was lost by one man who didn’t laugh as much as everyone else and let the side down. Spoiled it for everyone. Good potential for next year though. Definitely one to look out for in 2011.