I went for a run again this morning. This is mostly thanks to the fact that last night I actually slept. Yep. Really really slept. I drank no booze yesterday and then had a sleep. You may as well hit the reset button on my brain because I am brand spanking like new today. I am not wearing brands though and most certainly will no one get spanked. Instead I am just going to eat real food, like stuff that hasn’t been entirely immersed in oil as though to suggest it was pulled straight out of the Gulf of Mexico and thrown straight into a pan. I’m also considering not drinking again today, but as I’m hosting a show with Keith Farnan tonight at the Cow Cafe and we are only getting paid in booze, I see this could be a huge problem. Well its the thought that counts isn’t it? Unfortunately my thoughts only count up to 5 and then think about booze. Hmm. I might have a problem.

Anyway, I realised the problem of going for a run in Edinburgh. In London when I run, no one knows who I am and I don’t care who witnesses my legs flailing around like a cat caught on a ceiling fan, while I huff and puff harder than a big bad wolf with asthma. In Edinburgh though, its a bit smaller and there’s an awful lot of people I know around. Today, I ran past Josie Long and Mark Watson. They have both now seen the malco run and I had that awful moment of self awareness that said ‘I probably look like a twat’. Its amazing how concious you can be about being healthy, yet if either of them had seen me wolfing down a bag of chips or a large ice cream by the fistful I’d have been fine about it. Either I need to stop caring who sees me run, or start running while eating chips. Or just eat chips. Hmm that last one sounds good. Tonight = booze and chips.

You learn certain things about your friends when you live with them that you didn’t know before. I’ve learnt for example that Luke makes a great cuppa, that Danny will never finish a show by the time Edinburgh starts, that Nat actually like the 3rd Mummy film and then there’s Tom. Tom has a bizarre kleptomaniac need to steal things from the bathroom and put them in his room and likes to walk around in his pants making strange gestures in order to freak people out. These gestures involved pulling his pants up as high as possible and gurning or, as he did yesterday, sneaking up behind me trying to kiss my ear. I’m assuming these are ‘hilarious’ pranks and not some sort of attempt at a mating ritual but either way I’m going to get a lock on my bedroom door as of tonight. Actually to be honest, I’m oddly unphased by his strangeness, but this worries me as I’m not sure what he’ll do to up the anti-next. I’m so getting a lock on my bedroom door.

Yesterday I did five shows. Its my fault for being a stupid ‘Yes’ man and not saying ‘no fuck off’ instead. Luckily all five were ace. You’ve read about the radio show yesterday so here’s an uber quick run down of the other four:

Gig 2: Quiz In My Pants – This is a lovely afternoon free quiz show gig run by Laura Lexx, Nicola Bolsover and Dan Carter-Hope which mostly involves everyone, including the two guest comics, wearing pants, answering mad questions and doing various bonkers things. Yesterday the guests were myself and the excellent Jay Foreman and highlights included the audience nearly getting more points than both teams, Laura finding a fellow IBS sufferer who cheered about having it, and the discovery that no one really knows who all the Backstreet Boys are. I’m doing it again today so you should bloody well come along. To entice you, here’s a picture of me in my pants. Warning, its seriously sexy time pictures and its not for the faint of heart: 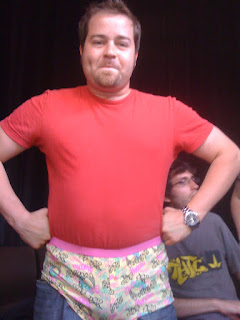 Gig 3: For 21 Nights Only at the White Horse – Another free one, which was much fun. It was all made better by a man who worked for BP being in the audience and when someone knocked over their beer, he was unable to deal with the spill. Aces. Top compereing from Ben Van Der Velde, and lovely sets from Rhys Jones and Carly Smallman too.

Gig 4: My show. See below for more info on this, but overall it was a lovely lovely show despite four people who didn’t enjoy it but thankfully left.

Gig 5: PBH and Some Other Comedians at the Cannon’s Gait. Ace show to finish the night on, not least because the PBH insists on bringing each act on to the audience singing a piece of classical music. You know they’ll be lovely when they can do the ending of Pachabel’s Canon. Evening was made better by someone telling me after about their friend in Brighton who did their insulin whilst under a bridge and was arrested by police for being suspected of taking drugs. Brilliant.

As of today I will be putting audience ratings of each night’s show in these blogs. Edinburgh always seems to be about the act getting judged so I am turning the tables on such things and judging each of you every night. If you were in the audience, feel free to take the ratings to other shows and use the quotes to ensure you get better seats and are respected or hated by the acts depending on how you acted during my show. This may well affect your career as an audience member after the show, but it could also ensure you have a long and happy life as a top punter and could even win the Edinburgh Festival Award for Best Laugher. So backdating to Thursday:

Show 1: 5 stars. That’s right. First night they combined a healthy dose of laughing with a willingness to not groan at the bad jokes and yet a sensible quietness through the longer story bits. They were nearly let down by one person getting up to wee halfway through, but successfully regained their composure on her return without much fuss. Recommended.

Show 2: 4 stars. I was going to give this group 3 on account of how they were perfectly nice but smiled rather than laughed at certain bits. I felt that whilst the potential was there they never really lived up to their hype, but managed to maintain a steady attention span and the occasional loud guffaw that kept me reassured they were infact all ok. This was boosted to a 4 star by the instant gratification of some nice twitter messages afterwards which shows they were nicer than they let on. They clearly just had communication issues and hopefully this is something they can work through at different shows.

Show 3: 5 stars. Sorry Thursday but this was my favourite audience yet and I’d highly push you to let them into any show. Despite some grumbles with a few people who weren’t enjoying it, the audience overcame this problem by telling them to leave and eventually pushing them out and leaving merely the creme de la creme of audience types. Well timed laughs, the occasional ;’aaah’ and one fully acceptable groan. These guys have the potential to win Britain’s Got Audience.

Tonight’s audience review will be up tomorrow.

Four shows to do today but first a fat filthy breakfast. I hope Josie and Mark witness me eating it just incase they now think I’m some sort of running dick.