I am lying on my bed in a room that looks as though something bad has happened to it. I wouldn’t say it looks like its been hit by a bomb as that would be a huge lie. Nothing is burnt to a cinder. There is no blast damage. There is merely the detritus of three days of festival going mixed with the clean detritus of packing for a month of festival going. Today has a game plan. Pack, sort out everything else in my life, work on show, do a show, go to sleep, get a train, Edinburgh. That’s the plan. Already this plan has been messed up by me starting today with some toast and then doing this blog before anything else. I stupidly didn’t put them on the list otherwise I could have ticked them off already and felt good. To be honest I haven’t even made a list which is where this probably all started going wrong. I blame having 9 hours of sleep after a weekend where 8 hours was all I collectively have had since Friday. So enough about my stupid lack of planning and busyness. ARE YOU READY FOR THE OMNIBLOG? It was going to be an UBER BLOG, but Tiffany, of the Stevenson kind, pointed out that as I will be blogging about several days of stuff, it will be like the Eastenders Omnibus and therefore should be an OmniBlog as it encompasses all. There will be pics and words so strap yourselves in. It won’t be a bumpy ride, its just that I’m all about the health and safety:

– I think that I like nothing more than randomly being offered free watermelon. FACT.

– I met an actual Town Crier. He wasn’t crying at all. In fact, he was really happy. If I had a beard as big as his and a large hat, I would be happy too. I rename him the Town Smiler. 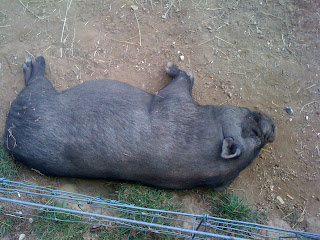 Quick game – Is this pot bellied pig DEAD or ASLEEP?

– Cecil the Caterpillar is a fat selfish prick. If you are going to eat all the lettuce you should fucking well contribute to the house in some way.

– On Sunday me and Carl Donnelly dealt with the Super Giant Helter Skelter. Proper dealt with it. I then had an ice lolly. Best day ever.

– Despite all the entertainment for kids, the most popular attraction appeared to be a broken table in the middle of the main field. I aim to have a whole festival whereby I smash up some furniture and let kids go nuts on it. Cheap and easy. 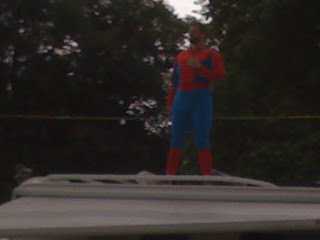 Marcus Brigstoke dressed as Spiderman on top of his camper van. Paul Byrne’s quote of the moment ‘Jesus, someone give that man his kids back.’ Brilliant.

– Pop up tent’s while popping up in super quick time and giving you instant tentery, seem to completely have forgotten about the cover sheet. So much promise. So little delivery.

– People that wear Birkenstocks will now be known as ‘Birks’. I am one of those people. I am proud. Sort of. Its all about the orthopedic sandal wear.

– Bonkers award of the weekend goes to Laura Jane Martin. A slim, white, Liverpudlian girl who sang a folky version of Chakademus and Pliers ‘Tease Me’ whilst playing the jazz flute, a ukulele and grinding and winding ragga stylee. Seriously fun but hugely unhinged.

– Best Heckle of the weekend comes from the 8 year old girl in the front row of Comedy For Kids on Saturday: 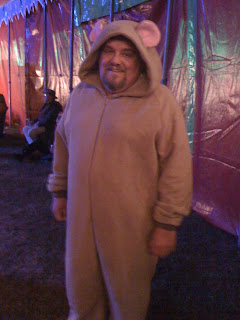 Andre Vincent as a bear. That is all.

– There are a lot of guinea pigs on the petting farm and they are all nearly called names after chocolate bars. There’s Wispa, Crunchie, Aero and many many more. Then there is Eric. He’s an albino. I can’t help but feel there is some level of discrimination going on there.

– Special music mention must be made to whoever was playing old school junglist massive type music in the Bollywood tent at midnight on Saturday. I have been repeatedly singing ‘booyaka booyaka….incredible’ ever since, much to the discerning looks of everyone around me.

– The double heist is when you steal something off someone, whilst distracting them by talking to them about someone stealing things off people. On Saturday, the triple and quadruple heist was invented. The world is no longer a safe place to live. 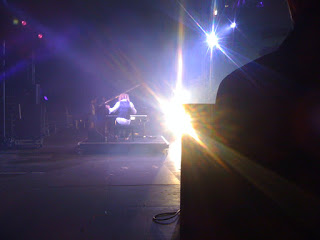 – The Minchin’s back as he rocked it in the big tent on Friday. Quick Minchin Fact: Despite his height, he’s surprisingly good at bouncing on a space hopper. Quick Minchin Fact he doesn’t know: I ate all his blue M&M’s. He also still owes me a crepe. Offering to pay for one I’ve already bought just doesn’t cut it. 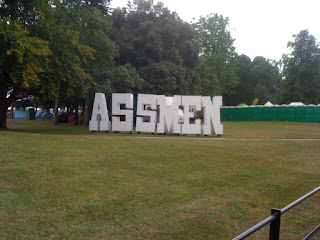 Madness’s sign was asking for mischief. The mischief was blamed on Calvin Harris who was then pushed over in a portaloo by the Madness boys as revenge. He was fairly upset. We might know who the actual culprit was……

– Speaking of culprits, the comedy tent manager apologised to Paul B that someone had stolen our rider the night before so they’d hidden it so it wouldn’t happen again. This mostly meant we couldn’t steal it again on Saturday night. Selfish.

– Reading bedtime stories for kids is quite possibly my favourite thing ever. I might have to borrow some kids so I can do it again. Its fun even when a small child is tugging at your foot, another is hitting you with a balloon and three are insisting they live on the moon. Yes, its that fun. 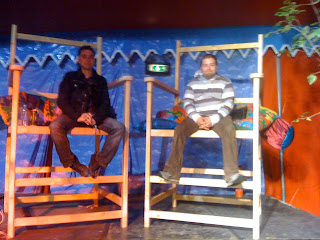 Me and Matt Kirshen on normal sized chairs.

– Things that made me think I was hallucinating: A small boy sitting in the middle of the crowd for Comedy For Kids who was wearing the most terrifying werewolf mask I’ve ever seen. I was still a mess from the night before and had to do a double take to check he wasn’t a projection of an inner demon. He wasn’t. He was just a damaged child.

– Scouse to Scouse resuscitation is a joke that just doesn’t work ever.

– On the drive to Camp Bestival I nearly ran over a chicken that was trying to cross the road. There was nothing on the other side. I think this answers the age old question. Chickens are just pedestrians like you or me and need no reason for road crossing.

– I tried to persuade Pete Cain I can still breakdance at the side of the Silent Disco stage. I was pretty drunk, I managed some things, but I managed to hurt my back and arms more. I also managed to make Pete laugh and he thinks I should start every gig with that. Gigs will have to start having proper wooden floors for this to happen. 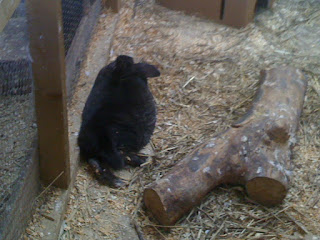 – Despite how it sounds, hosting the main stage is a bit pants. Only good bit was welcoming and thanking the Fall and watching Mark E Smith wandering off during his set every two minutes only for the stage manager to gently grab him, turn him around and push him back towards the stage. I didn’t get to introduce George Clinton due to time issues. Stupid concept of time. 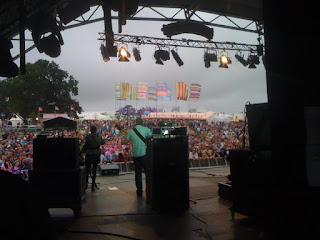 – I didn’t get my face painted as Spider-Man. I also did not buy a Panda Hat. Fail on both accounts. Sorry Edinburgh, you shan’t be seeing a bear based Spider-Dude anytime this year.

– The Coconut King lives in Camp Bestival. He has a big machette and cuts coconut with such a laissez faire attitude that at any point you think he might lose an arm. I paid £3 for a jelly coconut. The risk of gaining a free finger with it was worth £3.

– Pete Cain is also a coconut king. He uses a mallet and a big knife. He doesn’t like coconut. This makes his efforts more dedicated. 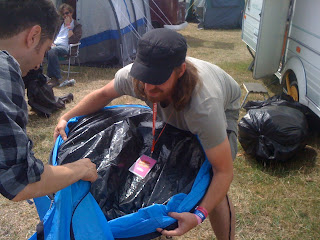 Brett Vincent shagging my tent while Matt Kirshen holds it down.

– Pop up tents really really need to pop down as easily. Much kudos to Kirshen and Vincent for attacking it till it died and fitted back into the bag.

– Award for most costume changes goes to Joe who was in more outfits over the weekend than Lady Gaga is in over a week. Most impressive were the Clone Wars Obi Wan outfit and the leotard with feather hat and cape outfit. 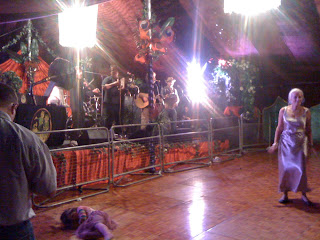 – Quick Game 3: Girl on the floor in corner of Whisky River gig. DEAD or ASLEEP?

– I bumped seperately into two people I haven’t seen in years and years. Sadly I saw them both as I was leaving and didn’t catch up with either.

– A man came up to me to tell me his fave comedians are Bill Hicks and Richard Pryor, but that he really enjoyed comedy for kids. I’m not sure if the next show I should do clean jokes about how drugs are great or just set fire to myself and shoot out someone’s tyres.

– Some last few quick notes: Albee Hound wins award for most awesome kid of the festival; Andre Vincent does tricks with hats. They are not hattricks though; people with irritating toot machines should not play them before midday on any camp site ever; same goes for people with loud baby screaming machines; cheesetwists are a surprisingly good late night drunk snack; Almanac; Craig Cambell is a bloody brilliant MC, and comic; big flat boards with pictures where there are holes for people to put their heads through, will never stop being funny; My stupid tan lines from Lounge on the Farm have got ten times worse.

There’s probably more but I have to go pack. Hope you enjoyed the OmniBlog. Tomorrow’s blog shall be from a train. Excited? No? Oh.

Previous Calculomaniac
Next Back To The ‘Burgh