Before last night my image of the RAF was very much men wearing leather hats and goggles, with slightly curled moustaches saying phrases like ‘Chocks Away!’, ‘Toodle Pip’ and talking about rogering things a lot. “Roger that’. I assumed a lot of stuff got rogered. Then I thought there would be a few of them who talked about how much they loved their wives and families and they’d all be the ones that didn’t return. And at least one of them would have a wooden leg like Douglas Barder. But it turns out its not like that at all. In fact it appears they’ve got all futuristic and less twee, which I suppose in terms of war and things is a good thing. I can’t imagine Spitfires are quite the top class of plane they used to be. I mean for a start its an ale. You can’t fly an ale. Although if you drink enough ale you can probably believe you can fly, which is close. Anyway, much like a brook, I’m babbling now. Essentially I found out what a real RAF base was like yesterday when once again the career path of stand-up allowed me to gain entrance to a place i would not normally be allowed anywhere near and if I tried I’d get shot in my face. Probably.

Actually, not probably, but definitely. As one of the organisers, who was a Flight Lieutenant officer type something something important and built like he could crush my head between his two smallest fingers, gave us directions he told us to go past a ‘nasty man with a gun’. I gave him a look of sheer fear. He apologised and said he was just joking. He said that it was really a ‘nice man with a gun.’ I explained to him that it was neither the ‘nice’ or ‘nasty’ bit that bothered me, but far more the ‘gun’ bit. I assume the man’s nature of emotional tendencies would affect whether or not the gun was used irrationally, but the fact it was there at all was really not that reassuring. The Flight Lieutenant offered to cycle alongside us to the Mess where the gig was, and said we’d get there way before him. Instead he cycled like the wind, constantly overtaking our car, to the point where Rob Broderick stated that it was a bit like the T-1000. We would constantly think we’d lost him to find him cycling right by the car again. We were half tempted to knock him down to watch him melt into the floor and come back with a knife for an arm. We were handed passes that said ‘unescorted’ on them, which I guess means I could have roamed around all I liked, but out of fear for ‘nasty men with guns’ I decided it was best not to. 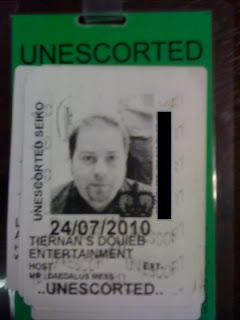 (My ‘I look like such a criminal’ pose. The bit I have blocked out is a barcode just incase posting it up lands me in military prison or something. I’m really not sure how these things work)

The mess where the gig was, wasn’t a mess at all. In fact, it was really rather nice. I can only assume the RAF are fairly OCD and for them it might have been a mess compared to everywhere else, but I liked it. It was called the Daedalus Mess, which I pointed out was an odd name, as Daedalus was the father of Icarus, and Icarus was shit at flying. So for somewhere that trains pilots, it was a rather strange choice. Essentially they are saying they train people to get too close to the sun and die. Luckily they took this well and didn’t make a nasty man with a gun attack me. In fact the whole gig was really lovely. With my general anti-war stance and left wing notions, I thought it might be a tough gig, but I was so hugely wrong. I forget I was on a training base and felt more like I was at a student’s union. We were very well looked after and the audience were a pretty intelligent bunch of mostly post-uni officers in training. I made light of what they were in training for, using the word ‘cockpit’ only once as an insult, and said their overalls made me wonder if they worked for Kwik Fit and they didn’t mind at all. I didn’t tell them I wanted them all to say ‘chocks away’ and that they’d let me down as I thought that’d be too far. Instead we gave them the best a show we could and Abandoman rocked the hell out of the second section. I’d never thought I’d see a group of trainee pilots wave their pens in the air to a hip hop beat, like Snoop Dogg meets the Great Escape (well not at all. I know there are only a couple of pilots in the Great Escape. Shh), but it was brilliant. We then spent a while speaking to people whose jobs it is to plan flight strategies and fix planes and all sorts of jobs I’d be crap at. Hopefully they’ll do more as they’ve promised me I can go in a plane next time and see round the college which would make me a tad too excited and I’d probably get asked to leave by a nasty man with a gun when found running around the runway with my arms out like wings and making gun noises.

There’s loads more to tell but I must rush to catch a plane of my own to sunny Jersey. Another unusual gig tonight, this time hosting a series of new plays. I’m still not 100% sure how I’ll do, but I’m sure it won’t be more drama than it already is. Arf.

Previous They Say I’m A Dreamer
Next Jerseyhouse 5